Adam Steiner confronts the decline of the box-set TV show and the future of film and streaming.

The box-set programme has destroyed cinema. Or at least, it was supposed to. The revolution is very much televised but it was also meant to be a form of liberation from the old studio system of cliche and market-force driven programming. After reading the excellent, Down and Dirty Pictures [Peter Biskind] I realised that all too often the initial dream of the indie filmmakers becomes a revolution betrayed by the industry. Companies like Miramax, which began as a street-fighting champion of challenging material, grew into a a uniform corporation and the movies they tried to support were obfuscated by star names and subsequently bloated by budgets.

The new online only delivery models of streaming and downloading, granting  temporal ownership of material, seem to have picked-up the same bad habits as the cinema industry: that of vacuous naming, presentation over content and the ongoing project of extending the lifespan of a project for its own sake, ad nauseum, ad infinitum. For every quality show there are ten bad ones, time-fillers, space-takers, mind-killers.

The problem is this: the majority of the branding in modern cinema, the films and the experience itself, are pushed to the brink of banality with names and presentation that suggest the more simple something is presented, or described, the more accessible it will be, making for a better [easier] viewing experience, and generating a more consistent cash flow. At the extremes of inanity, the majority of cinema seems bereft of ideas, particularly when it comes to naming. Too close to the referent, a slew of film titles read more like straight trade descriptions desperate to portray as dully and accurately as possible their contents. The audience [read, consumer] is offered something so Ronseal [it does exactly what it says on the tin] they are prepared for a brute median of expectation from the outset. This film will not blow your mind but it does have XXXX in the film as this also happens to be the title of the film — see Snakes on a Plane — you get exactly what you might expect, you are not challenged; disengage your mind, nothing is expected of you, participation is not required. this is equally reflective of the commercial content-focussed mentality, you ordered a grey Ford, a living cliche, and that is exactly what [all] you are going to get. 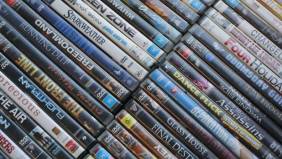 I readily acknowledge we all need accessible, chill-out films where do not have to think, a classic hangover action film [Demolition Man]  What’s scary, is that the name or title seems to dictate the product; less so the other way around. The creative work is not much presented to an audience, but skewed to meet a determined agenda of selling as opposed to promoting [the generified “user” is sold to the [junk product]. With box-set season shows this seems to have gotten worse. Longer than the standard two-hour film, they promise a broader canvas as delivered by The Wire and it’s societal range on the death of the American Dream. Admittedly, this was pre-stream, but the point stands that audiences could be brought along with a patient and deliberate programme that offered layers instead of pure surface. By contrast, the majority of contemporary “season-based” box-sets simply lurch from uneventful episode to episode promising an inevitably laboured conclusion, a devastating punchline, a shattering ending that neatly establishes the need for another season, the beyond elastic art we have come to have a right to expect [our money’s worth].

The attitude is echoed in the use of reductive language used to describe classic films, a man goes in search of X to avenge Y because he done an affair, suggests a dumbing-down of what a film is really about. The original material is bracketed into a narrower field of vaguely similar territory. Worse still, it perpetuates a tradition of maximising opportunities from a film brand/franchise that squeezes further product out of the concept, eventually leaving the concept behind, the spin-off is an over-shadowing ghost that has sucked the body lifeless and subsequently proceeded to fuck the corpse into dust. The endless and nameless sequel, see Scream, what was originally a film title, becomes an exercise in numbering, a descending redux of inertia. Further, the streaming studios are now creating their own in-house homogenized indie; rogue state productions by streaming services looking to create their own content. This can work really well, as in the case of Beasts of No Nation [Netflix], and amusingly, people still struggle to recognise them as proper films, especially when it comes to awards, but more often than not, leads to a churning of vehicle pictures that would otherwise be made for video, if the format was still in use. This means that a few gems inevitably get lost in a tide of shit.

It’s not all bad. The Fargo franchise, at first a straight remake of the original Coen Brothers’ film, embellishing it with stand-out performances. Expanding that Minnesota microcosm into two more self-contained seasons that have rich characters, creeping narrative arcs filled with dread and the constant threat of bodies waiting to hit the floor, you are literally set in place to watch the drama unfold. Contrast this with the adaptation of American Gods, a series of disconnected FX-driven set pieces, an ex-Hollyoaks hunk “actor”, pseudo-mystical nowhere speeches [that don’t really say anything or move the plot along] and everything occurring at a snail’s pace, for no reason. Gratuitous, bland scene-setting shots linger over buildings, as opposed to thoughtful vistas or landscapes of Fargo that show you the external environment as visual portrayal of a character’s inner psychological state, building upon tone and atmosphere. Perhaps this is unfair, the first season of Fargo, a remake of something already successful, American Gods an adaptation of a sprawling book from a very popular and respected author. But where Fargo established its own style of grown-up restraint and shocking overkill [a continued tribute if you will], AG is just dull, paint-drying television that ages you, like turning up for work when there is nothing to do, it is pure obligation, a life lived from A to B, hour-by-episode.

As sure as video killed the radio star and streaming and download services appear to have more or less killed-off solid state formats [consider the game cartridge, laser disc, minidisc, VHS, Betamax] we are truly living in the immaterial world. There is some traction with the deluxe DVD and Blu-ray disc, but it seems this too shall pass as the artefact is so vapid and comparatively unwieldy — it does not allow for transient shared access and requires hand delivery. Films must be promoted but aside from a poster and the blurb, they cannot compete with the resurgence of a highly visual and tactile format like vinyl. The LP personifies that objet d’art charm that hardbound books carry, which also contributed to the sharp cooling of the e-book’s heels. These objects have presence, physical quantity, films are flat, their existential status is more flimsy, liminal and ephemeral; and in the common require less interpretation from their audience – making them distinctly disposable experiences.

The further challenge of naming is that we might be running out of names, and in the most reductive production behaviours, that means ideas. The limits of syntax and associated meanings suggests there are only a proscribed number of permutations. Like lego, we are limited by the language of the blocks in our possession. Bands too are running out of interesting and original names, this has lead to the rise of cannibalising the names of other items of pop-culture, The Brian Jonestown Massacre Django Django, Com Truise, Dananan Ackroyd, sometimes replacing irony with a concrete and interesting identity.

At the extremity, the word, or names, become a brand. In cinema the title-as-brand can more or less dictate genre, and dictate to the market, the audience. In seeking out the form of naming that satisfies our expectations, we also narrow our scope of what we will and will not seek out and make efforts [you know, clicking] to watch.

Copyright, that most legal of measures that helps to nail down precedents, can save us from some of this evil of banality. It secures a singular vision towards an idea, that in and of itself, will never be as unique as we feel it to be [Plato had exactly this trouble after studying under Socrates; forever throwing muses]. even in a non-fiction context, there is much to be said that two people would write the same biography quite differently although they might employ the same research materials and are confronted by the same facts — interpretation is key to individuality.

One thing to consider is allowing language, and naming, to break out from its own confines; the power of parentheses to throw the reader/audience into or out of a certain mindscape or timespace, to plunge them in at the deep end and shock them out of a mindless stricture of day-to-day dialogue. This is a good and bad thing. The poets might need to become the next generation of writers-at-large. They are the group of artists that, at their most avant garde extremities, can force us to re-think how we speak, to interrogate the medium of thought. By benevolent short-circuiting they confront us with intimate gestures of understanding that encourage pause and reflection when the rest of the world is rushing into newspeak; language as an actioner of want. The risk here is that the dark-side, many of the shrill-shill Instagram poets that peddle soft-core self-help ideas that merely sound wise, might hijack the enterprise, wherein the philosopher kings become poetic-marketeers. We see it all the time Nationwide cash-for-golden words adverts [we’re all embuggered together] and the very cheesy Cathedral City adverts, where rhyme is exploited to generate sentimental, nostalgic warmth, like good-old glory days of Hovis mass-produced bread via the industrial revolution. In this vein, we are led down the garden path of sloganeering vacancy, comfortable propaganda, it doesn’t hurt anyone, but it will turn your brain to mush.

If we sell out to wordlessness, a poverty of ideas, uniformity not uniqueness, endless and nameless sequels and franchises in place of originality, then we lose the transformative power of cinema; the very ideal that the stream and the download were supposed to bring direct to the homes and devices of the thinking, feeling audiences.