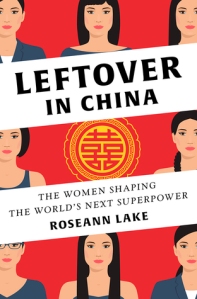 Marketed as “Factory Girls meets The Vagina Monologues,” Roseann Lake’s debut book Leftover in China, published earlier this year in February, makes for a lively introduction to the phenomenon of 剩女 (sheng nü) or “leftover women.” Highly-educated, urban women above the age of twenty-five, these unmarried “leftovers” are the Chinese equivalent of “old maids,” while being far from middle-aged themselves.

Personal testimony is the propelling force behind Lake’s work, who takes the reader with her in tracing the stories of her personal friends. These characters range from the country-girl turned city-woman, Zhang Mei; mistress-extraordinaire, Ivy; and Yale-educated lawyer, June Ma – whose love lives are the subject of intense familial and societal scrutiny.

Divided into twelve chapters, each chapter begins with an anecdote that would amuse an Anglo-European reader – anecdotes such as that featuring Christy’s mother, who cunningly posed as her daughter on QQ (an instant-messaging site) as a final attempt to marry her off to a “well-to-do man with a green card” in the US.

Each chapter goes on to mix personal experience with elements of Chinese culture in order to expose the incredible social pressures put on these women. The first chapter, for instance, discusses the by now familiar gender ratio imbalance in China, while Chapter Seven reveals the incomprehensibly sexist policy of women requiring a higher test score to be admitted to university. Elsewhere in the book, the concept of 撒娇 (sajiao) is introduced, which is to say the time-honoured way” in which a woman makes her beau “feel loved, needed, chivalrous and just all-around manly” through “a series of pouts, mewls and foot-stomping.” The unique plight of gay men and lesbian women pressured into heteronormative marriage is discussed in Chapter Five and adds yet another dimension to this conversation. In this way, Leftover in China paints a dynamic picture of life for urban women and men in China, while explaining how so many remain unmarried despite the excess of men (mostly rural ‘bare branches’) in the country.

It is crucial to approach Lake’s work understanding that it reads more like a book-length op-ed than a university textbook. Journalistic rather than academic, it occasionally lapses into generalisations, skipping the legwork of citing detailed studies to evidence claims. Nonetheless, the lives of Christy, Zhang Mei, Ivy and June, and others, makes for scintillating reading, peppered as they are with asides to statistical data and secondary reading. Particularly memorable is Ivy’s “coaching” of June (in the chapter titled “Higher Callings”) in which she explains the art of baiting and snagging a man. For those interested, the tips include posting pictures expensive things “so the men following you understand that you have exquisite taste.”

That being said, it is not all Sex and the City-esque fun in this book. Lake makes astute comparisons between China and other countries including America, Japan, Korea, and Singapore in this book. Chapter Eleven (“Bamboo Ceilings”) does this well with substantiated comparisons between “leftover women” and Japanese “New Year’s noodles” and Korea’s “Gold Miss […] a never-married woman in her thirties or older who has received at least a four-year college education, has her own career, and earns a higher than average yearly income.” Using Japan as a “cautionary tale for China,” Lake uses these case studies for an argument to reduce the societal pressure on women to marry instead of pursuing professional or career goals. To do so, Lake intimates, would immediately improve half of the population’s involvement in economic growth. In addition, Lake’s comparisons of China with America pre-empt Eurocentric notions of unmarried college-educated women being a uniquely Chinese phenomenon. She notes,

It’s also critical to keep in mind that whereas Chinese women have been the dominant gender of college-educated degree earners as of 2011, American women have represented the majority of higher degree earners since 1982.

Although the idea of sajiao might sound unconscionable to most American women, a gander through women’s magazines published in the United States during the 1950s and 60s is extremely sobering.

This international perspective comes with a trade-off, however. Currently the Economist’s Cuba correspondent, Lake spent five years in Beijing as a television reporter and journalist. While five years is certainly enough to gather sufficient material for a book-length study such as this, Lake’s critical voice in Leftover in China is that of an American outsider looking in, at times curiously detached, more amused at Chinese idiosyncrasies than thoroughly outraged at the injustice Chinese women face. As such, though Lake’s reading of the situation might serve well a reader unfamiliar with China, it perhaps has less to say to Asian readers.

Although the book has been reviewed somewhat favourably elsewhere (see for example Kirkus and The New York Times), nonetheless, its release has been dogged by controversy over allegations of “academic erasure.” This is because Lake’s Leftover in China makes no mention of Leta Hong Fincher’s seminal publication, Leftover Women: The Resurgence of Gender Inequality in China (Zed Books, 2014), a book that accomplished the important task of contextualizing the phenomenon of sheng nü within a larger trend of diminishing rights for women in China. Following the publication of Leftover in China, Fincher tweeted lengthy allegations of “academic erasure” by Lake, who responded by explaining that she had not read Fincher’s book in a deliberate attempt to prevent it from colouring her own writing process.

Though this might appear a strange decision given that most look to build on existing material, it is certainly true that the two books differ widely in tone and treatment of the subject matter. For example, although both writers discuss China’s household registration system which indelibly labels one a rural- or urban-born resident, Fincher offers a detailed history of the policy in distinction to Lake’s observation that it is yet another systemic hurdle to finding companionship. Of course, both books have very different target audiences in mind, and therefore employ different methodological processes. Nonetheless, it is now impossible to discuss either book without bringing it into conversation with the other – a fact that has raised the profile of both books on Twitter and beyond.

Ultimately, and despite the issues surrounding it, Leftover in China is a good primer for a reader looking for an introduction to Chinese society and the phenomenon of “leftover women.” If a journalistic non-fiction read is what one is in the market for, then Lake’s book does the job – admirably well.

Chloe Lim is a writer and graduate student at the University of Oxford researching English Literature from the 20th century to present. She specializes in trauma studies and diasporic fiction.