Marcel Krueger reviews an unsettling account of the myths and legends of Scout Rock, a dominating and ominous presence in West Yorkshire, England.

Mountains, even small ones, can be a dominating presence. Looming over the place where I live, Dundalk in the Republic of Ireland, are the ridges of the Cooley Mountains in the Republic, and the even more imposing hump of Slieve Gullion, the highest mountain in County Armagh in Northern Ireland. Every day the 573-metre high mountain presents itself differently – dark and brooding under rain clouds, its heather flanks and forests clearly visible on a sunny day. Often its peak is hidden completely under a hat of low-hanging clouds. It sits on my mind, just because of its constant presence on the horizon, and I think about the mountain often; even when I do not see it. I think of its two summits, and the cairn on the southern one, where the hag Cailleach Bhéirre, an ancient goddess and the Queen of Winter in Irish and Scottish folklore used to dwell and lure innocent victims in to devour them, littering her abode with their bones. She even put a spell on the lake on the northern summit, so that anyone who swam in it would emerge as an old person – a spell that took its toll on the legendary hero Fionn mac Cumhaill, who swam the lake and emerged an old man with grey-white hair. In the end, his men forced Cailleach Bhéirre to give Fionn a restorative potion to make him young again, but his hair stayed grey.

I’m not the only one who is influenced by the presence of Slieve Gullion. Writer-walker Garett Carr, in his book The Rule of the Land: Walking Ireland’s Border, recalls a local dog walker who claimed that a walk to the summit was the best in the world.

Who could blame him for feeling this way? How could he feel any other way? It was almost inevitable, having been born and raised within the tight contours of Slieve Gullion’s powerful attractions.

Writer-walker Ben Myers has structured his latest work of non-fiction, Under the Rock: The Poetry of a Place, around a similar slap of rock that comes with its own set of myths, but one that is closer to him in both a literary and geographical sense. And maybe even a threatening one. 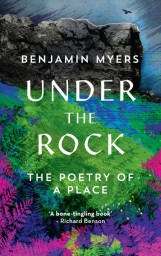 The book charts the journey of Myers and his wife, writer Adelle Stripe, from London to a new home in the village of Mytholmroyd near Hebden Bridge in West Yorkshire, and his subsequent exploration of the area. Dominating the sky over Mytholmroyd is Scout Rock, the 130-metre high rock cliff of the title. Under the Rock is structured around Scout Rock as an anchoring presence both in time and geographically. From his terraced house at the bottom of the rock, Myers explores the history of the cliff and the area.

The book is arranged into four parts, “Wood,” “Earth,” “Water,” and “Rock,” which all end with photographs of some of the sights mentioned in the preceding chapters and what Myers calls “field notes” or more accurately “missives from the mulch” – such is the way that Myers thinks of the snippets of prose and small poems that he scribbles down under the influence of the rock. However, Myers not only recalls his own walks and wild swims in order to get a sense of place; he also uses the artistic prism of poet Ted Hughes, who was born in the village and for whom the rock and the area played an important role. Following Hughes, Myers discovers wild falls and natural pools to swim in, illegal asbestos tips, and a beach at the shores of Gaddings Dam at an elevation of 365 metres.

For the first few chapters Myers follows the by-now established pattern of contemporary place writing in the anglophone world – leaving one place behind and overcoming a personal challenge (addiction, sickness, mid-life, etc) through the exploration of new surroundings. Readers familiar with books such as Amy Liptrot’s The Outrun or Will Ashon’s Strange Labyrinth will immediate take the point. Here is a man who is trying to make sense of himself and his new surroundings (complete with an animal companion), who discovers some of the tragedies of the past associated with the area, but who seems in the end – and in the shadow of the rock – to overcome his challenges.

Myers’s prose is outstanding throughout the book, but in its later stages where he recollects darker moments – such as the 2015 Boxing Day floods and the incessant rains that led to a landslide on Scout Rock that dislodged some asbestos that had been fly-tipped there decades before – he masterly weaves together stories of human tragedy and human misconduct. To this end, the Yorkshire Ripper makes an appearance, as does the disgraced paedophile Jimmy Saville, who had strong ties to the area and is captured on recovered Super 8 film leading a group of children up the mountain:

There is snow on the ground as he leads a procession of local children, faces flushed with the winter cold and the excitement of the occasion, Piep Piper-like along the same fincline that Daniel Defoe wandered, and where the notorious Cragg Vale Coiners ran their forged goods under the cover of eighteenth-century darkness, and up which the Tour de France cyclists powered, and down which the great wrathful flood waters of a Christmas night ran with fury.

In the end, this book proves to be a fine way into Myers’s fiction, a glimpse into the real-life influences that make him tick and have come together so brilliantly in his 2017 novel, The Gallows Pole. What he does with Under the Rock is place Scout Rock and Mytholmroyd firmly on the literary map, and perhaps in a much more concrete way than Ted Hughes did before him. This book is a powerful reminder that all is not well in the world, and that we sometimes forget that the darkness is not kept at bay by the screens of our smart phones and digital TVs. Instead it looms over us, like a cliff side in the dark.

Marcel Krueger is a German writer and translator living in Ireland who writes about places, their history and the journeys in between. His articles and essays have been published in the Daily Telegraph, The Guardian, Slow Travel Berlin, and CNN Travel, amongst others. Marcel also works as the Books Editor of Elsewhere: A Journal of Place, and his latest book Babushka’s Journey: The Dark Road to Stalin’s Wartime Camps (I.B. Tauris, 2017) explores the wartime experiences of his grandmother and her journey to Russia in 1945 through a travel memoir. More info about Marcel can be found at www.kingofpain.org