While Suzanne Buffam’s A Pillow Book and Darcie Dennigan’s Palace of Subatomic Bliss take on vastly different forms and voices, both are populated with related concerns, and both, through their inquiries, fixations, and variations, move in exciting new directions. A Pillow Book takes as its model Sei Shōnagon’s The Pillow Book (Makura no Sōshi), a Heian-era collection of musings and complaints written during the author’s service as a court lady for Empress Teishi in the late 990s. Buffam’s collection makes both overt references and analogous connections to its namesake (the speaker’s daughter, for instance, taking the title “Her Majesty”), but pursues the idea of a “pillow book” still further by using the pillow itself as an object around which to revolve, expanding easily from pillows to sleep, dreams, and relationships. Using the original Pillow Book as a touchstone, Buffam includes entries in the form of paragraphs and funny, meditative lists. 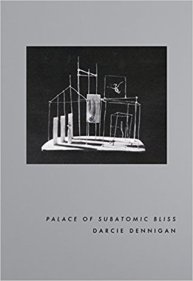 While Buffam launches from a single historical text, Darcie Dennigan compiles a collection framed by several literary and philosophical movements in Palace of Subatomic Bliss. Dennigan works to situate herself among absurdists, Oulipians, surrealists, and the figures of her own life, opening with Daniil Kharms and Camus, closing with Sara Ahmed, and populated throughout with an ensemble of characters: artists, writers, friends, a fetus, and one “homunculus.” Yet, despite the plethora of outward references, the poems of Palace are strikingly internal, reading sometimes as the catalogue of routine events (driving to work, doing the dishes), and sometimes as a strange, surreal dream.

A Pillow Book, too, is interspersed with dream: “A man is chasing me through a dark house,” reads one record. “I do not recognize the furniture, but the staircase in the moonlight, as I hurtle down the banister, looks familiar” (40). This sense of strange familiarity echoes throughout the book, which proceeds with recognizable forms, but which, in the suspense of its sprawling sentences, in the recursion of its connections to Sei Shōnagon — to various other pillows and sleepers spread out over time — becomes a remarkable accumulation. There is the speaker — restless, thinking, looking — and the night, endlessly cycled into new iterations. “Nothing ends,” says the speaker to Her Majesty. “Everything keeps changing from one thing into another, over and over throughout all space-time” (82).

The endless new iterations of Palace of Subatomic Bliss are largely formal. Dennigan shifts from long lines to check lists, tables, images, italics, and stage plays. The constant newness of form serves as a means of exploration. Each poem is an attempt. In one section, Dennigan subjects a source text (a custody agreement) to an Oulipian constraint, then uses the same text as the basis for a surrealist poem, testing the two against each other. Her conclusion: “I became, in real life, very confused by my substitutions and analogies. / So confused that for a time I was again selfishly very happy” (88). The pleasure of such conflations is perhaps nowhere more distinct than in “Dandelion Farm,” a poem in which the speaker’s voice becomes entwined with the characters of a play that no longer exists in its entirety. “I don’t remember whether or not this was a scene in the play,” the speaker claims near the middle of the section (71). By that point, such unknowing seems essential. 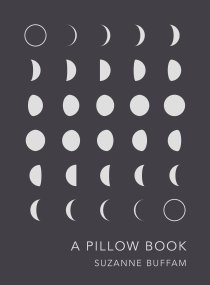 Though Buffam goes about it in a different way, both she and Dennigan end up occupying a similar position in their work. Each finds some disparity between herself and the other writers she considers, and uses that disparity to propel herself into new territory. In one of the later sections of A Pillow Book, Buffam muses on the fate of Sei Shōnagon, who, throughout the course of the collection, becomes a defining figure — someone against whom she outlines herself, and through whom she expands the concerns of the work:

In one account, she meets with a solitary death in Buddhist rags. In another, she’s rewarded with a high official for a husband and a daughter who grows up to serve at court. Some nights I try to imagine Option C (75).

The speaker’s approach to this binary reoccurs in the anxieties, exasperations, and ponderings of the rest of the collection. The plainness of the day-to-day and the burden of sleeplessness surface again and again, as do the pleasures and irritations of interacting with her daughter and her husband (who is also a writer, but who has an altogether different experience, falling asleep easily and, in one of the speaker’s dreams, lifting off from the front yard in an air balloon, leaving the speaker behind). However, the collection never rests fully in any of these orientations, being driven forward instead by the simple, unifying object of the pillow in a singular, interior search, landing finally close to where it began: “If you want to go to sleep, kiss your pillow goodnight” (90).

For Dennigan, the search also involves an “Option C.” From the first poem, the speaker outlines conflicting thoughts on ordinary events and the imminent birth of her child, highlighting a sort of pointlessness, switching, as she often does, into stage directions, which underscore the sense of performance:

3:54 am
The Russians: “The absurd is reality.”
Me: (She folds the towels so that they are ready to be unfolded.)

All exit.
Except the fish.

In fact, one of the more crystallized conflicts Dennigan considers regards the absurd. “Are there female absurdists?” she asks. “If there are not, I would like to be the first” (5). Later, she creates a table delineating claims about facts and meaning as presented by the French absurdists, the Eastern European absurdists, and the Russian absurdists. At the end of the table is a narrow row labeled “The would-be female absurdists,” and in its corresponding column, the phrase “What big cucumbers they sell in stores nowadays!” (16). This move — the playful swerve to speech or image in place of something more expository or philosophical — is emblematic of the collection as a whole, which takes as one of its primary concerns the relation of meaning to reality, but which does not land squarely in any pre-existing camp. Instead, Dennigan, like Buffam, not quite satisfied, continues on in her own direction, unwilling to ascribe meaning but permitting it as it comes, closing aptly with lines addressed to a lover:

And if we came back as trees

Two beech trees growing shoulder to shoulder, in the cleft
between us
I would allow a treehouse…

Karolinn Fiscaletti earned an MFA in poetry from Portland State University. Her work has appeared in Lana Turner, Fourteen Hills, The Gravity of the Thing, and elsewhere. She lives and teaches in Portland, Oregon.