Paul Scott Stanfied reviews a beguiling book of poetry from the pen of Joshua Edwards.

Joshua Edwards, A Monthly Account of the Year Leading Up to the End of the World, by Agonistes, Prophet and Fulfiller; or, The Exhausted Dream (Antebooks, 2018)

Joshua Edwards’s new book-length poem is small enough to balance on the flat of one’s hand (roughly 15 cm x 10 cm) but ambitious in its scope, marrying two quite opposed tendencies. On the one hand, A Monthly Account is rigorously closed in form. The first of its twelve sections is dated “January 21, 2012,” the second “February 21, 2012,” and so on, right to “December 21, 2012.” Each section has ten stanzas, each stanza ten lines, each line ten syllables. Yet even though the poem’s form is strict and regular, its speaker, Agonistes, is a soul-baring, emotionally labile, sturm und drang fountain of expression, reminiscent of Goethe’s Werther or Byron’s Childe Harold or Senancour’s Obermann. The intersection of his Romantic effusion with a nearly obsessive-compulsive mechanics of form generates thematic energy as well as being often entertaining. 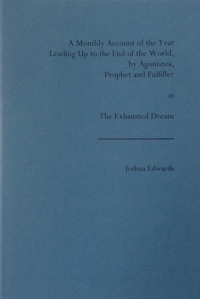 Agonistes is apparently 34 years old as he writes (“I was thirteen in 1991”). He was orphaned at birth, bullied at a Catholic orphanage as a child. When his confession/manifesto opens, he has already arrived at a disillusionment as deep as that of Ecclesiastes: “I have read hundreds of religious texts / Seven thousand books of philosophy, / And a million pamphlets of poetry. / None of them contains an ounce of wisdom.” One of the books he read, we can assume, was Ezra Pound’s Pisan Cantos, to whose famous line “What thou lovest well remains” Agonistes replies, “What remains if thou lovest nothing well?” Despite the efforts of the nuns, “The foibles of a certain circumspect / Nazarene do not connect with me,” and other master narratives have proven no more convincing:

Astrology and Marxism have failed
To explain our terrible behavior.
We are far more sinister than the night
Of Capitalism that surrounds us.
We traded freedom for a bag of chips.

As Agonistes’ complaints continue, he reminds us of the Unabomber, Ted Kaczynski, and other men whose desperate conclusions led to lethal remedies, and we may wonder about that “end of the world” to which his title points: “There can be no other choice than to raze / The foundations of all future prisons. / I myself could change the Earth’s directions.” But Agonistes is a true Romantic: titanic in his threats, he is also tender in his affections; of boyhood, he writes, “A girl captures his imagination / With her smile, his bicycle seems too small, / And his baseball cards turn into paper.” By July, the year’s midpoint, a woman has engaged his attention, and “I was a new man that very instant.”

Love buds and flourishes over the following months. Love is a perceptual and epistemological revolution for Agonistes, as it was for his Romantic precursors: “I doubt my senses, I hear smells, I see / Symbols wherever images should be: / A sunbow’s arc above a waterfall.”  Love has changed him, and love can change everything; the “heart’s genius” can make “a question into a revolution.” His old projects abandoned, he proposes. He is accepted. His love does have some information to at last reveal, though: “‘I’m on a terrorism task force and / We’ve been watching you for about twelve months.’”

A setback, to be sure. Agonistes will have time to serve, but his apocalyptic ambitions have dissipated for good. The poem ends, “Tomorrow is visitation day and / I don’t believe in endings anymore.”

The modest appearance of A Monthly Account may delay its discovery by readers, but just as the FBI eventually caught up with Agonistes, readers will eventually get wind of it. And as the agent tailing Agonistes eventually fell in love with him, readers may fall in love with A Monthly Account for its narrative élan, its ingenuity in handling its formal constraints, and the surprising engineering of the redemption of its speaker.

Paul Scott Stanfield was educated at Grinnell College and Northwestern University, and has been a member of the English Department at Nebraska Wesleyan University since 1989. He is the author of Yeats and Politics in the 1930s and of articles on Yeats, other Irish poets, and Wyndham Lewis.