Even for a poet so deeply linked to Robert Duncan, Robert Creeley, and Charles Olson, Michael Palmer can seem intimidatingly enigmatic. Yet, it is not that his language is necessarily difficult nor that his references are hyper-obscure. It is rather how Palmer plays with silences and ekphrasis that makes his poetry so different. It is how Palmer can make one claim, and then later cut against it, leaving the reader to figure out the meaning from what Palmer cuts away. The Laughter of the Sphinx, his most recent collection, continues with this thread of development: it’s not inaccessible but it is difficult, and Palmer’s references, dialectical inversions, and strategic use of elliptical reference and silence abound through the collection. 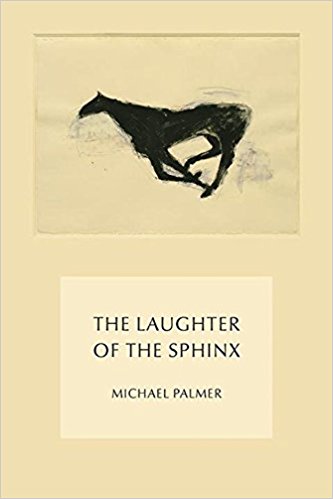 The Laughter of the Sphinx works by contrast between movement and sound, life and death, light and dark in dialectical tension. This is seen immediately in the series “Light Moves (1-6)” which is based on a collaboration with the Margaret Jenkins Dance Company and is a set of poems designed to be performed. The pairings continue when he writes in that sequence, “mineral light and whale light / light of memory, light of the eye” in a poem about movement and expressed in sound.  The simple language actually plays to emphasis the complication of the poems.

Palmer has no small amount of meta-commentary embedded in his work as a guide to reading and understanding it. In the title poem of the collection, Palmer’s narrative states that “sad-eyed scholars and mournful scribes” listen to the “the laughter of the Sphinx/ endlessly reading, endlessly echoing.” Reflection, a mild pessimism and confusion pervade the work. The reader also realizes that what is not said is as important as what is.

The importance of silence and complexity is maintained through the book. In “Poem (Oct-Nov 2013)”, Palmer writes “It is true / that we do not, / that a measureless silence / writes in our place.” This shows up again in “Untitled (27 vi 2013), “unwording —/ he thought // the page / swept clean.” Yet Palmer still sees writing as important even is incorrect or impossible, in “Proposition,” “To write as perfectly as Euclid / was always the goal / even as he turned out / to be perfectly wrong.”

Again one can see that these highly complex poems are underscored by short and sparse lineation, repetitive themes, references to light, and simple vocabulary. This continues to guide the reader through even the most emotionally or metaphysically complex poems in the collection. In “Still (A Cantata—or Nada—for Sister Satan):

And the children, with their knowledge of death

Palmer’s narrator has children confront death symbolically, and in simple language, Palmer indicates that those children continue to build regardless of knowledge of death.  Palmer, however, doesn’t let this sentiment sit easily, in the poem “After,” he states “And to write a poem / beneath the sickle moon / is barbaric” referencing both Basho and Adorno. One cannot tell if it is the beauty of the light of the moon or the unyielding gaze in light of horror that renders the act barbaric.

This book is not sure how to address the horrors that are referenced or alluded to in its pages, which include 2011 Fukushima disaster and the impending changes in the natural world. In the poem “In the Memory of Ivan Tcherepnin,” another ekphrastic work, Palmer states “So many sounds flower but are not flowers” suggesting the impossibility of capturing ideas in sound and sounds in ideas . We cannot truly represent nature even if we are both part of it and mimic it. Our building and actions of creation, for Palmer, are paradoxically both a resistance against death and often the cause of it.

The Sphinx laughs because there is no answer to the riddles and Palmer wants us to dwell in those complexities awhile mainly by considering what can’t be said and what can’t be expressed. Yet Palmer resists total nihilism in his poetry by celebrating the act of creation itself even if it is “perfectly wrong.”

C Derick Varn is a teacher, poet, and theorist living in Cairo. He is a reader for Zero Books and the editor of the online literary magazine, Former People.  His poetry has appeared in Axe Factory, Writing Disorder, Union Station, and Unlikely Stories.