Since 2005, the Hong Kong Writers Circle has published a yearly anthology that attempts to encompass the grand variety of tales told about Hong Kong by its nationally, racially, and ethnically diverse band of writers. Heading towards its fifteenth year of publication, the 2019 anthology has been particularly anticipated because it not only features its usual short stories, but also poetry – some written by Hong Kong’s migrant workers. That said, with tales from those born in the city and those new to the city, the anthology articulates a unique sense of “Hongkong-ness” for its readers. 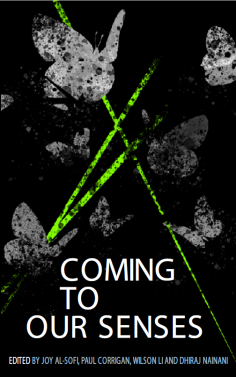 Among the ten poems in the volume, Vaughan Rapatahana’s “common sense” underlines the bewilderment one can experience in the city. The title of the poem echoes that of the anthology, but the persona is indeed more interested in unveiling how she fails to live through her everyday commuting with “common sense.” Starting with the lines “hong kong does not do/senses too well,” it continues with a strong sense of suffocation as the second stanza develops – “some days we cannot see./some days we sniff only the odoriferous –/so little ambrosial here./while all too often we taste only the nauseant.” The unique use of font and line arrangement helps exemplify the sense of bewilderment one can easily experience every day when travelling on the MTR during the rush hours. Take these lines for example:

there’s too many of us at times,

as we do our best to avoid

& sardined into the mtr.

The vivid use of visual elements underlines the sense of physical closeness yet psychological alienation commuters can easily see, smell, and feel every day. People are merely tangentially connected with each other. In a way, the poem portrays a cross-section of the everyday life of the city.

Collaborating with the TCK Learning Center for Migrant Workers, the anthology includes short story and poems written by Indonesian domestic helpers working in Hong Kong. Indeed, one of the most exciting pieces to read in the anthology is a short story written by an Indonesian migrant worker. Anni Juliana Tobing’s “More than She Knew” poses a protagonist who is also a migrant worker in Hong Kong. The short yet moving narrative unfolds the protagonist’s traumatic experiences working and travelling in Hong Kong. The protagonist is not only forced to leave home to earn a living for her children but also deprived of even more by migrant worker agencies in both Indonesia and Hong Kong. What is the most tragic here, though, is the depiction of an employer who dehumanises her by treating her more like a slave than an employee. The fact that migrant workers have to live in the employer’s home sounds very normal to local ears, yet many are not aware of just how exploited some workers are under this arrangement: long working hours that might run up to twenty hours a day, small and poor living condition, not to mention different levels of physical abuse.

Wilson Li’s “Lo Bak Go” is another brilliant piece of writing. The title is a transliteration of turnip cake, a traditional Chinese New Year dish in Hong Kong. The story revolves around the ups and downs faced by a young local female chef, Colleen. Be it the title, language, or content, Li’s story demonstrates a strong sense of being in Hong Kong. Interestingly, this sense of Hong Kong also encompasses the classism and sexism that one can readily experience in the city. Being a straight-A student, Colleen is interviewed by reporters on the day she collects her public exam results. When asked what she would like to be in the future, she replies “chef.”

‘A chef ’? asked one reporter, who had expected Colleen to answer them with ‘I want to be a lawyer / doctor / businesswoman / accountant / rocket scientist / or similarly impressive sounding professions’. Thus, the entire classroom turned silent for a few seconds; none knew how to react.

Such a sense of class might not be unique to Hong Kong, but the scene of reporters storming into secondary schools in which a student or two gain exceptional results rings the bell of many locals. Against all odds, Colleen manages to become a fully trained chef. But, not only does she encounter sexual discrimination in her workplace, her mother is also one of those who tries to impose a gender role upon her:

‘Maybe’ … Mother had tried to persuade her while Father remained silent, ‘You may use the new job to find a husband. That is where every woman should be – in her husband’s home.’ Colleen spent most nights in the kitchen serving men who were dating the women of their dreams. Those men in the kitchen were complete losers. Colleen would rather die in the desert than beg them for a drop of water.

Although Hong Kong in the twenty-first century is not a strongly patriarchal society, the assumption that one will get married in order to form a family is still predominant. While Li does not go further in outlining Colleen experiences, he does allow her the act of making the “perfect” turnip cake as a means of catharsis. Through the process of recreating the “perfect” turnip cake made by her late grandmother, Colleen begins to regain the pace and different aspects of her life. Interestingly, when she contemplates what is the real “perfect” flavour of turnip cake made by her grandmother, she realises that it all reduces to a psychological realm of love, family, and memory intertwined: “At that moment, Colleen started rewinding her memories, like a salmon swimming upstream. Could this really be the problem? Was she re-creating and then rejecting the lo bak go so she could hide in the past and refuse to move forward?” Upon reading this line, one cannot help but wonder if it could be read as a parallel to the city itself – how should Hong Kong situate herself within the layers of memories and histories that constitute the city?

Stormed by political turmoil, 2019 would become one of the most significant years in the history of Hong Kong. And it is exactly this atmosphere that marks the significance of the anthology. As the lead editor, Joy Al-Sofi underlines in the introduction of the anthology, “This year there were fewer rules and British English in one story may be followed by American in another, reminding us that Hong Kong is polyglot, a mélange that has continued to function and thrive even in the midst of a maelstrom.” Encompassing plurality not only linguistically but also culturally, this anthology shows the full spectrum of the diversity of Hongkongers. From the overwhelming crowdedness experienced by expatriates, the class and gender stereotypes that haunt the locals, to the psychological dilemma and alienation suffered by migrant workers, Come to our Senses shows the true and multiple colours of Hong Kong.