Lara Feigel is in her mid-thirties at the opening of Free Woman, which is a cautious memoir. She is an academic, who is married and is expecting a second child. But the book starts with a sense that the middle-class narratives Feigel is inhabiting no longer fit her. “There were too many weddings that summer,” she writes and, even though she “chastised myself for my own mean-spiritedness and hypocrisy,” Feigel cannot quite let go of her unease. 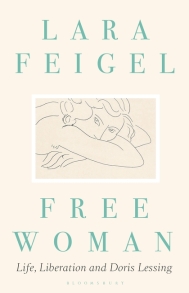 As Feigel tries to work out what is wrong, she begins to immerse herself in the work of Doris Lessing. She quotes Anna Wulf, the heroine of The Golden Notebook: “I am interested only in stretching myself, in living as fully as I can.” Feigel reports that, “Lessing’s voice… had taken hold of me, fifty years later, to the extent that it seemed to muffle the voices around me.” This is a memoir about an evolving inner life that cannot be reconciled with an existing outer one, which is a Lessing theme. Lessing was often a wry observer of social convention, too.

The nine chapters that follow move between an inner voice of growing clarity and moments of outer discordance. The book has what appears to be a circular structure. It begins and ends with a chapter titled “The Bush,” which grounds the story in Southern Rhodesia (now Zimbabwe), where Lessing grew up and which Feigel visits towards the close. In between there are encounters with key ideas that preoccupied Lessing – womanhood, escape, Communism, free love, madness, writing, and the dark. Each of these is deployed in an attempt to understand a notion of freedom that Feigel glimpses as a possibility in her own life, refracted through the older writer’s prose. For example, Feigel juxtaposes Lessing’s experiences in the African bush with her own memories of the Welsh coast, near her grandmother’s house. “I went for long walks along the beach,” Feigel writes, “staring out at the sea, fascinated by the encounter with limitlessness.”

Free Woman sometimes reads like detective fiction, with Feigel as both an amateur sleuth and the central mystery, searching for clues in Lessing’s life in order to understand her own. This produces a striking kind of life writing: a life in search of a way of writing itself anew. Thus, Feigel reflects on Lessing’s sexual awakening, as described in her memoir Under My Skin, and then recalls her own. “The first set of hands belonged to a boy I had kissed at a party,” she writes. “He was not especially enticing but I wished, coldly, to gain experience.” Likewise, and with similar candour, she explores her feelings about motherhood, ageing, and politics.

Yet Feigel can also sound like an unwittingly comic narrator, as in her account of a visit to Clancy Sigal, an American novelist who was Lessing’s lover and the model for Saul Green in The Golden Notebook. It is not quite clear what Feigel is hoping for from the encounter and Sigal is (as Feigel reports gamely) dismissive of the central premise of her book. “It quickly became clear that Clancy found the notion of freedom as a structuring principle for a book about Lessing absurd,” Feigel admits before continuing undeterred, “I insisted that she had used the word freedom frequently enough to suggest that it mattered and, what is more, that he had used it frequently in the 1960s as well.” This is true enough, but it makes their encounter sound like a strained effort at live literary criticism. Feigel hasn’t found the right tone to capture the absurdity of the situation.

Those episodes that turn inwards are more persuasive. Feigel writes about an “ordinary incident” when she attends a picnic in the park with her husband’s work colleagues:

I’d found these situations easier since having a child… But our son had the same tendency towards the kind of aloofness that can be interpreted either as shyness or disdain as I did… On this occasion, he was shy and wanted to sit on my lap. I sat with him, apart from the games or group conversations, responding politely but quietly when people came to talk to us. I was aware that we were a disappointment, that in a different mood I could have… found in myself a capacity to tell or at least respond noisily to anecdotes.

This small act of refusal sparks a family argument. But Feigel unravels it to examine different impulses in herself – the desire to please others and to “show off” socially, and another contrary impulse to “live more honestly; to seek a muted, personal kind of political freedom.”

Feigel’s book heralds a new era in reading Lessing, partly in a more biographical mode. Lessing guarded her privacy carefully. Her official biographer, Patrick French, will have a complex task in unearthing a long and messy life. He has already corrected one misapprehension in Feigel’s book: she states that Lessing’s novel Love, Again is based on unrequited feelings for the composer Philip Glass, which French states is a case of mistaken identity.

Feigel’s book also shows that Lessing’s work has acquired new relevance. Lessing started to fade from view before she won the Nobel Prize in 2007, seeming like an anachronistic reminder of urgently political times. A reassessment would be timely. Few fictions writers of her era speak with such clarity about colonialism and migration, global injustice, the collective deceptions of politics, or how women’s lives are constrained by convention. For example, Anna Wulf’s project in The Golden Notebook is to find a way of integrating her different selves, with a constant risk of things “cracking up.” She organises her life into separate notebooks, “A black notebook, which is to do with Anna Wulf the writer; a red notebook, concerned with politics; a yellow notebook, in which I make stories out of my experience; and a blue notebook which tries to be a diary.” The notebooks are resonant at a time when many people curate their life differently at work, in their relationships, or as an activist (including through different online presences). In one of Wulf’s notebooks, she pastes newspaper headlines and clippings for a while, like a prototype social media feed.

Sexual freedom was another important part of Lessing’s search for a different kind of life. But, like D.H. Lawrence before her, she was careful to distinguish between such freedom and passion-less sex. Feigel notes, in contrast, that “For the couples I knew of in my generation, extra-marital encounters were not love affairs in the conventional sense, but sexual interludes.” It may be the closest we have so far to a reading of Lessing for the Tinder generation.

Feigel provides new clues to understanding both Lessing’s life and its influence in her work. Occasionally, the evidence leaves the reader with the choice to reach alternative conclusions. For example, Feigel speculates on a relationship with a man called Jack (not his real name), whom Lessing fictionalised as Thomas in the early Martha Quest novels:

Jack was a Czech Communist whose family, like Thomas’s, had all died in the extermination camps; soon the closest friends of his youth would be executed in Stalin’s notorious Slansky trial. As a result, he was fearful of exposure, more bruised than he was prepared to admit, unable to trust in the possibility of a happy future. Doris nonetheless committed herself wholly to the relationship, convinced that her certainty and strength would be enough to counteract his fear.

The word “nonetheless” suggests that it is baffling that Lessing was drawn to Jack/Thomas given his own inability to commit to her. Yet perhaps this should read “as a consequence.” The evidence in Feigel’s book hints that Lessing’s search for freedom was, in part, a pained inability to “trust in the possibility of a happy future.” She was, as she labelled Martha Quest, a child of violence, her childhood overshadowed by the First World War and by the brutal colonialism of Southern Rhodesia. It may be that she was drawn to Jack/Thomas (or whatever these fictions represent) because she saw an echo in him of her own pain.

Free Woman thus shows how the relationship between our inner and outer lives often takes time to unfold. One of the most moving encounters Feigel has in the book is with a psychoanalyst. Some of the factual details of Lessing’s life are well-rehearsed. Her two early marriages, to Frank Wisdom and Gottfried Lessing, both ended in divorce. She later remarked drily, “I do not think that marriage is one of my talents.” Feigel is fascinated by the spectacle of Lessing leaving two children behind in the former marriage, in search of freedom, only to quickly have a third child with her new partner. She pays some attention to a 1954 novel, A Proper Marriage, which is directly autobiographical. Yet Lessing’s narration of these events changed subtly over time. When asked in an interview in 1982 if she missed being married, she replied, “Well, you see I think I acquired the qualities to be married rather too late and by that time I’d rather lost interest in the whole business.”

Too late for life perhaps, but not for her fiction. Lessing published a second book that takes marriage as its theme, The Marriages Between Zones Three, Four and Five, a 1980 science-fiction novel. Its plot has similarities to A Proper Marriage, especially in how the central marriages end. In both stories, the man is sent away, while the heroine is transformed and leaves the marriage: Martha Quest is pulled in to Communist circles, while Al•Ith in Marriages is drawn towards the mysterious blue peaks of the higher Zone Two. In the earlier book, this conversion is ultimately disappointing; in the latter, the change in Al•Ith can barely be described. In both books, a child remains with the husband when the woman leaves the marriage. These shared elements of plot suggest similarities with Lessing’s first marriage, to judge by her account of it in Under My Skin. It is a reminder that imagination and memory obey different rules to linear time. Sometimes an inner life may develop in ways that there are limited opportunities to express outwardly. Marriages takes a core of biographical material and re-imagines whole worlds from it. The later novel has an expansive vision of marriage (influenced partly by Sufi thought) as a mode of personal and sexual union, an exchange of ideas, a metaphor for the intermingling of nations and cultures, and as a spiritual state.

Lessing was a champion of imperfect books, once claiming that “I am much more interested in a bad novel that doesn’t work but has got ideas or new things in it than I am to read yet again the perfect small novel.” Feigel’s memoir is a good book, if an uneven one, and it has many fresh ideas about Lessing, who would no doubt have appreciated its candour. It is also an unfinished story and one that is richly suggestive of how the act of narration may, as in The Golden Notebook, change the form of the life that is being told. Perhaps for Feigel, as so often for Lessing, there is space for a sequel, in life as well as in art.

Tom Sperlinger is Professor of Literature and Engaged Pedagogy at the University of Bristol, and co-editor of Doris Lessing and the Forming of History.