Grafton Tanner reviews a memoir that looks at the working conditions of big industry – how corporatism breaks, imprisons, and sometimes kills its workers. 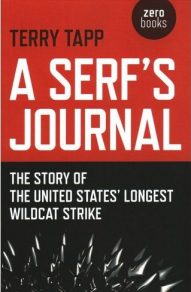 Terry Tapp’s A Serf’s Journal: The Story of the United States’ Longest Wildcat Strike opens with two deaths. Steve, a twenty-two year old construction carpenter and Harley-Davidson enthusiast, is arrested for growing marijuana. He is murdered in prison by a throng of inmates wielding improvised knives. Coby, a twenty-three year old father of two, is killed working atop a gunnel at JeffBoat, the Indiana shipyard that serves as the setting of Tapp’s book. Coby’s ankle gets caught on a cable, which forms a noose around it and slings him upward like an animal in a snare trap. He hangs until the paramedics arrive, his brain dangling out of his skull.

Steve and Coby, like Tapp, were trying to live in a society that locks out the poor from escaping both poverty and the often-deadly jobs they must work to survive. Their deaths haunt the entirety of the book, which tells the story of the 2001 wildcat strike at JeffBoat – one that Tapp was instrumental in fomenting when he worked there.

The prison in which Steve is murdered and the shipyard where Coby is killed comprise part of what Tapp calls The Prison – that is, the conglomeration of disciplinary apparatuses that condemns many to a life of meaningless, dangerous toil only to earn offensively paltry pay. The Prison is so large that it can be nearly impossible to discern, let alone escape. Driving to the shipyards one morning, Tapp takes stock of The Prison around him: helicopters looming overhead, cameras atop street fixtures, chain-link fencing. Arriving at work, he must scan an identification card. He is filmed walking through the turnstiles.

Tapp is aware that fencing and cameras alone cannot make a prison. “Adding a cop and a guard won’t turn them into a prison either. Even adding you and me – as prisoners – leaves something out.” That “something,” Tapp notes, “hides somewhere in the stories of Steve’s and Coby’s deaths.”

Tapp’s debut memoir is a wide-eyed, penetrating look into the working conditions of big industry and a stark example of how corporatism breaks, imprisons, and sometimes kills workers.

A Life of “Unwork”

Tapp took the job at JeffBoat – a job he knew could kill him – to receive health insurance for his pregnant wife. Tapp is a painter and currently lives and works as a tattoo artist in New York City. And during his tenure at JeffBoat, he struggled to survive in an environment that wipes out imagination in its bid to turn a profit through “unwork,” which is Tapp’s term for the negation of productive work. Tapp understood he was being monitored not to ensure he continued to “unwork” but in order to keep him from doing anything else, like sketching or painting or imagining ways to escape. Frequently, he stole away to sheet metal boxes and squatted in fetid sheds to write or do anything remotely creative in a place that allowed no room for an artistic act. He met other workers who wrote poetry and music and who did so in the crucible of poverty.

Tapp pushes these thoughts further, ruminating on the privileged set of artists and thinkers who were the ones to widely promote the idea that art could not be created until bedrock needs are met. “Our understanding of ourselves and how we function is a product of the study of the privileged – those wealthy enough…not to be bothered by unwork or to be able to fully foist that burden on others,” he writes.

Tapp makes it very clear he isn’t trying to “write philosophy” or “produce another book to decorate anyone’s shelves.” And thankfully, A Serf’s Journal is not written in the insulating jargon of high academia. What he does offer is not only a firsthand account of the longest wildcat strike in U.S. history but also a critique of neoliberal society as it entered into the twenty-first century. Much of what Tapp details – the constant surveillance, the concentration of power, the disposability of workers – has only intensified in the years following the 2007-08 financial meltdown and subsequent Great Recession.

Tapp portrays JeffBoat’s work environment as equal parts factory Fordism and managerial post-Fordism. Outside on the job site, Tapp’s body was pushed to work through sweltering heat and on frozen barges where one slip could mean death. Inside, he moved through meeting rooms, trailer offices, and other blank non-places. Administrators passed out awards for productivity and tried to convince the workers to accept programs that forced them to evaluate each other’s performance. When they weren’t risking their lives in the field, the workers rested in drab rooms with posters on the walls that spelled out ways to avoid on-site injuries.

These images of routine, unimaginative blandness (coffee pots in rooms without coffee or filters) resemble the ones posted to the now-defunct Facebook page Boring Dystopia, created by the late theorist Mark Fisher. Fisher started Boring Dystopia as a “consciousness-raising exercise” that encouraged “people to perceive the actual state of Britain rather than the PR state.” Images captured on closed-circuit television and pictures of broken ATMs littered the feed, presenting Britain as a crummy state plagued by techno-capital’s bugs and dehumanizing logic. Working at JeffBoat, Tapp certainly lived in the sort of boring dystopia theorized by Fisher. Turnstiles locked in workers. Administrators circulated “boilerplate” newsletters. And Tapp and the others realized the harder they worked, the lower their pay would be because it took them less time to do it.

Interspersed throughout the normalized moments are glimpses into the kind of hell that exists on these work sites. Tapp and the other employees faced the threat of electrocution working in the rain. And in a particularly shocking scene, Tapp reads a newspaper story about two men who drowned in a vat of chicken parts at a Tyson plant in Kentucky. The plant didn’t offer satisfactory safety equipment, and workers had to pay for goggles.

When Tapp and the other JeffBoat employees realized they would not have the union’s backing for a strike, they decided to initiate their own. Word of the strike spread around the world, and the employees received solidarity messages from all over. They even gained the support of the local police force. “The police in Jeffersonville had been working for two years without a contract,” writes Tapp, “and suffered from low wages and long hours much like us.” In a culture where “Blue Lives Matter” is the reactionary call against movements fighting the kind of top-down brutality of corporatism, this gesture can seem alien. But Tapp’s book takes place during a period before online culture wars and identity politics split the police force from people’s movements.

Amnesia and Control in The Prison

In May 2001, the strike ended. It idled production at JeffBoat for one week. Tapp notes the climate changed significantly upon returning to work:

There was no workplace animosity coming from the company, no attempts to get us to jeopardize our lives for our jobs, no gratuitous firings or suspensions. It was clear, or seemed to be clear to most of us, that the company and the union intended to leave us alone in order to avoid further trouble for further trouble was exactly what we were prepared to cause them if we were provoked.

The terrorist attacks on 9/11 changed all of that. Suddenly, in the patriotic furor that exploded afterwards, the idea of dissent became dangerous, un-American. “To strike at all,” writes Tapp, “to harm American business, was a form of terrorism since it wounded America. In fact, to cause problems on the job at all was aiding America’s enemies.”

Tapp notes disconcertingly that “very little has changed” since the strike at JeffBoat. Today, some on the right view protests like the current #RedforEd teachers’ strike – as well as the ones at Standing Rock and for reasonable gun legislation – as affronts to liberal democracy. The common neoconservative narrative is that America was attacked out of the blue on 9/11 and that anyone seeking to slander the shining beacon on a hill is an enemy. Much of this narrative relies on retroactive memory work done by massive PR campaigns that erase historical instances of popular revolt. And JeffBoat, along with the union that did not support the wildcat strike, has lent a hand to such acts of erasure:

Though there was global support within labor and activist communities for what was occurring at JeffBoat…those who worked there afterward almost certainly heard little about what had taken place…it is not in the company’s or the union’s interests that people under their power recall these events.

Tapp saw this trend spread in the years after 9/11, resulting in a “global monoculture” of control and amnesia. He ends the book with a turn towards protecting memory. A mass mediated culture is, he notes, quite good at wiping memories. This kind of directed forgetting operates under the guise of history, but it is no history at all. Our post-9/11 control society wants nothing to do with memory because memories “do not cohere into the larger pattern that forms our understanding of the world and what we take to be the ‘meaning’ of human life.”

Tapp is joining a lineage of thinkers that seeks to preserve memory in the face of tremendous odds. Queer communities, black prophetic thinkers, and indigenous groups (among many others) have all relied upon memory to archive histories that have otherwise been written out of popular discourse. At a time when the right dreams of mid-century stability and the left longs for childhood in the 1980s, Tapp argues for the kind of remembering that opens up possibilities for alternative ways to live – and work.

Grafton Tanner is a writer and musician from Georgia. His writing has appeared in Paste magazine, Film Matters, and The Blue Indian, and his debut book is Babbling Corpse: Vaporwave and the Commodification of Ghosts (Zero). He is a classically trained percussionist and music educator, and he writes and performs music as Superpuppet.

One thought on “A Serf’s Journal”