Now I am embarked on a much larger project, my aim becomes to report the facts as well as I can, to follow the connections wherever they lead me, and to present a reasonably coherent picture of the leviathan-like morass which we call ‘civilization.’

There is a video of Jasun Horsley online where the artist as a younger man, in what looks like a sort of intense trance-like state, cryptically speaks to the camera about being responsible for thousands of deaths – deaths resulting from his magic. While Horsley is talking, in a cult-like aesthetic, images of the burning twin towers, Hitler, and JFK flash across the screen. More recently, Horsley himself uploaded a video under the title “Document of a Delusion” – a concession to the long way that the author has come from his days of black-magickal musings. Still, the video serves to grant the reader a glimpse into the colourful world of the writer who calls himself an existential detective and runs Auticulture, a website that aggregates his cultural and social commentary. 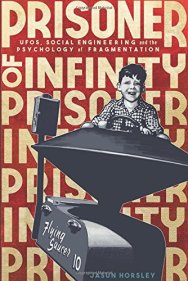 Perhaps Horsley could be described as one of the last adventurers. Even his biography reads like something from another time – an heir to a wealthy upper middle-class British family, son of the managing director of Northern Foods, and brother of the infamous London dandy Sebastian Horsley, Jasun Horsley disinherited his sizable personal fortune at a young age to travel to Morocco. A life of beggary on the Moroccan streets was followed by periods in Central America where he undertook extensive ‘research’ into psychedelics and cults. During this time he produced a series of obscure genre books about the Matrix and more generally about a reality whose unraveling – like a Baudrillardian prophesy – appeared to accelerate in the early 2000s as ghostly images of Al-Qaeda, embedded CNN journalism, and American fourth-generation warfare in the Middle East made it on to our TV screens.

However, his latest work, Prisoner of Infinity, is a long way from the intense landscapes found in these early works. This is a book which has a much more grounded and mature feel to it – perhaps the result of the author learning to temper the manic enthusiasm with which he seemed to embrace every passing esoteric and occult fad of the time.

The book’s point of departure is Communion, the best-selling book penned by Whitley Strieber which inaugurated the genre of ‘real-life’ accounts of UFO abductions. For Horsley, Streiber’s book becomes the centrepiece by which he carefully begins to deconstruct his own life. Examining the reciprocal interactions between this strange subculture and wider historical, political and cultural forces, Horsley invites the reader on a veritable tour de force of his adventures through both popular and more marginal aspects of twentieth-century psychology and philosophy. Strieber’s encounters with other-worldly beings are read against the work of a wide variety of philosophers, from well-known thinkers such as George Bataille, René Girard, Sigmund Freud, Aldous Huxley, and Jacques Lacan, to lesser-known but no less interesting authors such as Donald Kalsched, Carlos Castaneda, and the very interesting psychohistorian Lloyd de Mause.

In this way, Prisoner of Infinity unravels the influential new age movement and investigates its back-end. It postulates a critical materialist return to the real, to physical and carnal forces as structural determinants for culture and its foundation in individual experiences and the spirituality that they produce. It is here that Prisoner of Infinity also becomes a personal investigation of and reflection on Horsley’s own life, for which both the esoteric and the occult, along with the stew of internet conspiracy culture, are a sort of home terrain. The author knows these domains intimately, while at the same time taking a critical distance from the material and investigating it in a lucid, level-headed and often humorous fashion.

That is not to say that Horsley refuses to take seriously the very real influences of parapolitics on culture as well as the devastating after-effects of the most inhumane aspects of Cold War psychology. He does not. For example, Horsley notes in detail sinister government interventions like that of the myth-shrouded CIA experimental psychological programme known as MK Ultra – a programme of state-sponsored mind control only made public because of the Church Committee hearings in the US Congress in 1975. It is of such things that the Netflix miniseries Wormwood is made.

It is, though, Horsley’s eloquent and humorous style that means his book has the potential to open out onto a much wider audience than those fringe communities who are solely interested in UFOs and the occult. Prisoner of Infinity reads like a twentieth-century psychohistory of the US, and because of that becomes a fierce critique of  American science mysticism and its prominent representatives like transhumanist Ray Kurzweil – exponents of what Horsley thinks of as a “father-abandoned and mother-bonded symbiotic psychosis.” In a psychology resulting from early childhood trauma and the experience of helplessness, the body becomes perceived as a mere prison to be transcended. While this might still sound rather abstract, Horsley does a good job in breaking down psychoanalytic theories on early childhood trauma to explain the peculiar American national obsessions with transhumanism and the journeys to Mars that seem so alien (lame pun fully intended) to most readers outside of the nation.

All of this may be a bit much for the uninitiated reader to digest. With its main thesis of a trauma-based cultural engineering, Prisoner of Infinity asks a lot from its readers. For those unfamiliar with the subject matter, it may be difficult to process all of its disturbing premises, radically disenchanted politics, and transcendental presuppositions. To this end, the book might not be equally convincing for all its readers. Nonetheless, Prisoner of Infinity stands out as an exceptional work of art in its own right, weaving connections between an intimate and moving personal narrative, and the wild auto-didactic medley of references drawn from the domains of pop culture, psychology, and history. It is a truly boundless cognitive mapping enterprise certainly subsidized by the distinct lack of a ‘filter,’ as is common with those who have heavily experimented with psychedelics.

But in this way, Prisoner of Infinity seems unique in maintaining its clearly marginal and auto-didactic aura, while never verging on anti-intellectualism. Rather, one senses that Horsley can go places that most academics simply will not. It is not often the case that writers create something that is truly contemporary – in the best possible meaning of the term. A captivating archaeology of contemporary culture from a true underground artist who remains widely underappreciated, Prisoner of Infinity is surely one of the most interesting and challenging books to appear in recent years.

Nicolas Hausdorf is an editor, analyst, and essayist. His essay “Superstructural Berlin,” an experimental sociology of Germany’s capital (with illustrations by Alexander Goller) was published by Zero Books.