Sometimes a title gets to the nub of a book. The Oxford English Dictionary word of 2013, “Selfie” alludes to modern narcissism and the accompanying self-promotion and self-aggrandizement. Today, all of us are the CEOs of our own particular brand. The need to project a positive image and to be our own public relations team turns social interactions into profitable and promotable opportunities. Just like a minor politician glad-handing the truly powerful, we all document our aspirations of a life less mundane. While Western self-importance is continually rising, empathy is in a concomitant decline. Twenty years ago one could not imagine that refugees would be disparaged in mainstream British media outlets as “cockroaches”, yet this dehumanising rhetoric is in full swing today. 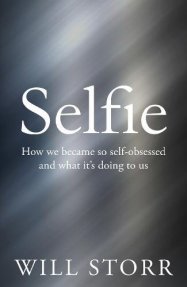 All of which is to say that Will Storr’s new book Selfie is extremely timely, asking and attempting to answer questions that are pertinent to our Snapchat and Instagram generation. Fortunately, it is not another cynical look at the narcissistic ways of the young. (This could only be a sterile cliché, Socrates already having groused 2,500 years ago: “The children now love luxury. They have bad manners, contempt for authority; they show disrespect for elders and love chatter in place of exercise”.) Rather, it examines the transformation of the Western sense of self: from Ancient Greece through to the modern, digitally-connected, always-affirmative self, doubly descended from the libertarian Übermensch of the online era and the 1960s Bay Area hippies.

Some might find Storr’s many diversions disruptive – the modern self is examined through the stories of the Dominican monks in an abbey in the north of Scotland; a London gangster who cracked up and found God; Storr himself undertaking a personality deprogramming class at the famous Esalen Institute a few hours south of San Francisco; and the political career of Donald Trump. Yet, they enliven the narrative, giving us characters of flesh and blood next to academic theories. Storr begins his story in Ancient Greece, locating the Western self – individual, competitive, desiring beauty – in the economies of the Greek city-states. He returns to this socio-economic moulding of the self on several occasions: the Chinese self, which rests on the foundation of “group harmony,” hails from the rich paddy fields where harvest required for everyone to work together; while the can-do positivity of modern Western society finds its roots in the Californian suburbs, where to get ahead in life one needed to get along with strangers and neighbours, always remaining “witty, smart, open, upbeat and attractive”. This might all be true, but it is curious that Storr does not mention the fact that Karl Marx was the first theorist to write about consciousness as formed by the means of production.

Storr’s book then traces the development of modern narcissism: from John “Vasco” Vasconellos’s school of self-esteem, which held that confidence is a panacea for every personal and social ill, to the rise of Ayn Rand libertarianism, aided and exemplified by Alan Greenspan, through to the venture capital or digital nexus Übermensch of Silicon Valley. Storr demonstrates that these developments were built on shaky foundations: Vasco’s concern for social good was nothing but thinly-veiled self-interest. The story of a disturbed individual whom we only know by the name “CJ” perfectly captures this narcissism and its frightening lack of empathy. CJ’s desperate belief in her own insubstantiality requires rat-on-a-buzzer dopamine rushes of digital approval, alongside her constant rejection of any genuine personal connections. This sense of mediation and projection is as thoroughly Warholian as it is alienating. Warhol feared intimacy as much as he craved it; his art created barriers between the artwork and the artist, between the artist and his tools, as much as it revealed proximity. Perhaps we can hear the echo of Warhol’s efforts in the endless scrolls of Instagram feeds, where models monetise the “intimacy” that they develop with their consumers.

Storr’s exploration of the self is broad in its scope, as he himself admits. But this is perhaps as it should be, for one of the most interesting sections refutes the idea of an essential self, which could be uncovered through therapy. Rather, Storr shows how we contain multiplicities, which can be revealed or repressed depending on the circumstances. This can be unsettling. One study Storr mentions shows that men who were sexually excited were twice as willing to engage in “immoral, unusual or extreme” sexual practices, from statutory rape to bestiality. As Noah Cross says in Chinatown: “Most people never have to face the fact that at the right time and the right place, they are capable of anything.”

The exponential curve of technological progress suggests that social media is not merely a passing trend, but an augmentation and redefinition of humanity. We are all busy doing PR for Me Corp. This reduces relationships to business-like encounters, while the non-stop judgment and evaluation that underlie contemporary culture make empathy increasingly rare. Take, for example, the sad story of Austen Heinz, driven to suicide by a media storm after he casually mentioned that he had been working on a technology that might improve women’s intimate health. Hatred moves swiftly from social media to everyday life. Yet, Storr wisely does not advise redress. He ends on a simple note, with a suggestion that people are, in essence, good. Perhaps so, but “Selfie” demonstrates that social norms are the foundation of individual morality and ethics. With businesses profiting from our insecurity, a new economy has formed, and with that a new human consciousness – whether for good or ill.

Mike Cormack is an editor, reviewer and writer who mainly focuses on China, where he lived from 2007-2014. He edited the magazine “Agenda” in Beijing. He is also currently working on a novel examining growing up in northern Scotland.

One thought on “Selfie”