Jeffrey Tam attended the launch of the new Hong Kong Specials Series by Penguin, reporting on the event and readings from the authors.

The evening of July 26 2017 marked the launch of Penguin’s Special Hong Kong Series, a collection of seven books (and more to come) which delve into the unique history of Hong Kong 20 years after the handover.

The event took place not long after the skies dusked over Kennedy Town, a modernized yet quaint area which embodies the themes from which the series of books derive inspiration. Readers and writers gathered at Alvy’s, a Western bar facing an aged Hong Kong-style building across the road. This location showcased the intimacy between the books and Hong Kong as its cultural blending paralleled the focal point of the series — Hong Kong’s local culture, internationalism, identity, politics, art, and urbanism.

Authors kickstarted the evening with readings  from their books. Xu Xi, author of Dear Hong Kong: An Elegy For A City, was the first to deliver  to a bar densely packed full of readers. Since the book is written in the form of a letter, Xu Xi’s delivery permeated an affectionate and natural atmosphere which simulated a direct exchange with a personified Hong Kong. She portrayed Hong Kong as a long-time problem lover to whom she has finally bade farewell. As much as Hong Kong felt a home to her, she struggled to find a sense of belonging as the city did not offer a space in which she could outstretch the boundaries that limit her potential. Her years in Hong Kong had shown her Hong Kong’s majority culture and her goal of being an English language contemporary novelist and writer was incompatible. Her reading of her letter to Hong Kong resonated with the audience as Hong Kong was never known to be a city of dreams. Instead, previous generations of locals had always praised the ‘Lion Rock Spirit’, a 70’s motto made status quo which was used by the Hong Kong people to achieve socio-economic advancement. It is not difficult to see how Xu Xi’s dilemma mirrors many of the situations faced by locals and readers whose aspirations differ from the majority culture whose focus has long been on monetary gains. However, the youth of this generation has shown dedication in vitalizing all types of aspirations, and the fact that Xu Xi’s valedictory resolution to Hong Kong is published in the new Hong Kong series prove that there is still hope for a more diverse cultural environment in Hong Kong. 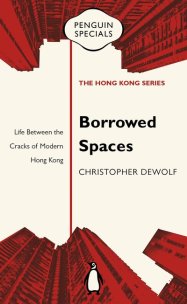 Following the first reading, Christopher DeWolf, author of Borrowed Spaces: Life Between the Cracks of Modern Hong Kong, took to the stage and presented his reading. Dewolf, who began writing about cities and urban life as a teenager, exuded familiarity on the topic of Hong Kong’s urbanism. He argued that Hong Kong’s unique informal urbanism took on an important political and cultural dimension. Most Hongkongers live in high-density areas without much private space, making public space uniquely important in this city. However, Dewolf analyses how public space is poorly designed, although history has shown that locals are capable in creating their own space. Dai pai dongs and open market stalls in the 1950’s, or simply household furniture placed outside so neighbors can sit and chat are all historic examples of citizens making use of public space outside an official framework. From this perspective, even the sofas at Sai Kung bus stops have a subversive quality. Dewolf argues that this unofficial and creative use of space, also known as informal urbanism, has been rivaled by a controlling government. He averred the post 1997 government which had chief executives whose goals were to pro-Beijing policies instead of local interests, resulting in much informal space sacrificed in the favor of modernization and economic advances. Dewolf finished his reading with an urge for democratic city-building and government transparency in a city whose idiosyncrasy and potential for resistance is created by its citizens.

Close to the bar entrance was a book-signing area where readers lined up to purchase new books and chat with the authors. Ben Bland, author of Generation HK: Seeking Identity in China’s Shadow, gave a few words to his new readers as he signed their copies. He mentioned that the new generation of Hongkongers found themselves in an identity vacuum. This new generation who had reached adulthood in the twenty years since Hong Kong’s handover in 1997 was referred to as ‘Generation HK’ by Bland. Bland elaborated that this peculiar Generation, unlike previous generations, was not bound by traditions of colonial rule, meanwhile having little to no ties to the Mainland since many of their ancestors fled from China to Hong Kong to escape political repression and poverty. When approached by young local readers such as this reviewer, Bland encouraged them saying that the future was up to them to shape and theirs to hold.

Antony Dapiran, author of City of Protest: A Recent History of Dissent in Hong Kong, also talked to readers about dissidence in Hong Kong. His interest in the local history of protests comes from his long time residence in Hong Kong, as well as his profession as a lawyer which relates closely to the rule of law, rights and the expression of those rights. On his journey through Hong Kong’s history, Dapiran discovered Hong Kong had been experienced in using protests as a means to voice their opinion to the government, so much so that these grassroots movements had become a part of Hong Kong’s unique identity. He said that despite some older citizens criticizing the current generation’s civil disobedience as troublesome and rebellious, history had shown that protesting had become one of Hong Kong’s core values, and that generations, both old and new, would continue to strive for social changes. 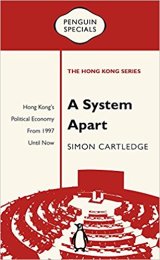 Simon Cartledge, author of A System Apart: Hong Kong’s Political Economy from 1997 Until Now, shared his opinion on the political economy of Hong Kong of the last 20 years. Cartledge studied the numbers of people’s income and found an alarming pattern. While the level of education of most people had been increasing, their income, as Cartledge stated, had been a flat line. With a graduate certificate in hand yet struggling to secure a favorable future, more and more locals had begun to rethink the ‘pro-business’ constitution of the city which, according to Cartledge, had given rise to severe inequality and government corruption. Furthermore, he discussed the irony of the ‘one country, two systems’ policy. He stated the policy was meant to create a convergence between Hong Kong and China by allowing 50 years of Hong Kong semi-autonomy post-handover, but recent political developments had shown the exact opposite; an increasingly divergent relationship between Hong Kong and China has emerged in the place of convergence instead.

The launch event drew much attention and the bar was packed all evening. The audience was positive and amicable despite the steamy weather and crowdedness characteristic of the city, and the authors were eager to meet and share with their newfound readers their unique perspectives on the past, present, and future of Hong Kong . It was inspiring to see the huge amount of people who attended an event whose purpose was to celebrate and promote political awareness, showing that locals are willing to create and preserve a place in which thought could be generated and change could be conceived.

Jeffrey Tam is a writer and musician born and living in Hong Kong. His book reviews have appeared in both the Hong Kong Review of Books and the South China Morning Post.