From 4Chan to Tumblr, Nicolas Hausdorf considers the possibility of a political anthropology of our networked society.

It’s fashionable to write sensationalist hit pieces on “the spectre of the alt-right” usually featuring good doses of kitchen psychology to explain away it’s protagonists’ political orientations as motivated by hate or frustration. Meanwhile, it appears that the sociologically increasingly uniform and bland featured journalistic mainstream, often unwilling the face bitter truths about the structural shortcomings of its own political vision, has not come an iota closer to understanding, let alone answering to this phenomenon which is at times as aesthetically and morally horrifying as it is, let us be honest, in light of the decades of a mind numbing postpolitical pensée unique, intellectually exciting.

Angela Nagle clearly understands this ambiguity of the sphere she is scrutinising: Kill All Normies, to be published by Zero Books in a few weeks, is the name of her title that already summons the polemic and punk style forces she seeks to investigate in an attempt of “mapping the online culture wars”.

That’s right: “cultural warfare” is the high-stakes notion Nagle employs and it is adequate for referring to both the self-assigned motivation of her investigation’s protagonists as well as the conservative intellectual tradition she perceives it in. The explicitness of such a perspective alone should supply some proportion to all of the political micro-expressions that the average media consumer will have engaged with in one way or the other through political dank meme social media channels, subReddits, SJW cringe compilations on Youtube, the proliferation and mainstreaming of obscure gender pronouns, Breitbart 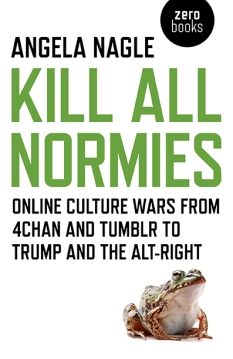 News, Milo Yiannopoulos, or any of the new omnipresent race-, religion-, and indignation- baiting new identitarian movements. They are the small shovels digging the vast trenches of a multiform, asymmetric and omnipresent cultural-ideological frontline that is currently increasingly dividing up city parts, friendships, relationships, and families. Kill All Normies traces the emergence of a new media based political unconscious that has been proliferating in the long-weakened tissue of Western post politics. The author allows the reader to navigate this emerging noosphere by outlining its genealogy and tracing and explaining its main online hubs and protagonists.

Nagle aptly investigates the colourful sociologies of subcultural production she describes as a sort of Castellian “Network Society” gone rogue, while also presenting a series of engaging theses amongst other things pointing towards the historical continuity of the alt-right as an ideology of transgressive liberalism or towards its internal contradictions as a force which is at times neo-traditionalist and antimodernist while at other times being radically free-market capitalist and transhumanist. The author meanwhile entertainingly follows this force into the anarchist message boards of 4Chan as well as the obscure dating-anthropology infused blogpost musings of some of the internet’s new class of neo-traditionalist auto-entrepreneurs. She defines the alt-right broadly as

Perhaps, this could be perceived as one of the more controversial points of her study raising the question whether the traditional distinction between a right and a left still makes sense at all and is not rather generative of the sort of ongoing culturally transgressive separatism preventing any kind of political dialectical synthesis.

Kill All Normies, meanwhile, remains an extremely entertaining and pedagogic study, in which we discover an author of a leftwing sensibility but who mainly captivates by projecting an utterly healthy sense of measure, justice, empathy and common sense at times equitably massacring the festering frustration-turned real world aggression of transgressive 4Chan culture and the online masculinist-reactionary “Manosphere” as well as the hysteria of what she calls the “tumblr Left”.  She employs this notion to describe a political movement that revolves around “a cult of suffering, weakness and vulnerability” that has colonised the Left and turned it into some sort of hysteric anti-free speech joke generating an “ideological brain drain” towards the right (These days the Tuvel affair must be proving her right).

I found that such concise formulations alone made the book worth buying but “Kill All Normies” features a generally exemplary and upliftingly solid level of politico-historical culture, along with what appears to be a meticulous effort of research, that make it an extremely worthwhile read. Readers learn about the ideological influences ranging from Butlerian radical constructivism on the Left, to the Italian conservative traditionalism of Julius Evola and Neomarxist roots of the alt-Right.

If there is anything even nearly disappointing about this book then it is certainly that it opens the door to a range of interesting follow-up questions about the nature of these seemingly self-perpetuating spheres which more often precisely evade or relegate the “serious” of political-economic relations which could have had the potential to bring us closer to investigating the nature of contemporary power. Perhaps it will serve to stimulate a lot more vital debate.

Reading this book was a pleasure and any reader whether on the left or on the right will be guaranteed to gain in sobering perspective either about his camp or the “enemy’s”. I perceived Nagle as the level-headed voice of reason and Orwellian “common decency” which in the space of 120 pages effectively manages to generate an arena of inclusive public space and rational exchange between the forces she presents, something which I had believed to be long abandoned between hysteric hit pieces and assumed intellectual separatism. Kill All Normies defends an air of conciliatory political culture while being bold and courageous enough to make judgments about both the ridiculousness of certain ideological fads and the moral repulsiveness and cowardly detachment of others. This book should be so widely read as to be taught in schools, even if that seems unlikely for a book as thought-inspiring and inquisitive as this one emerging into a deservedly disintegrating mainstream (media) discourse characterised by instead self-evident and self-important dogmatism.

Nicolas Hausdorf is an editor, analyst, and essayist. His essay “Superstructural Berlin”, an experimental sociology of Germany’s capital (with illustrations by Alexander Goller) has been published by Zero Books. His latest essay for the HKRB can be found here.

2 thoughts on “Kill All Normies”