Marcel Krueger discusses the creative potential of the city, the flâneuse and identity politics.

Typical of French nouns, flâneur is gendered, in this case masculine – so it would follow that there exists a feminine counterpart. Sadly, as Lauren Elkin points out in her book, ‘most French dictionaries don’t even include the word.’ So she introduces her own definition, an imaginary one as she states:

noun, from the French.

Based on this definition, Elkin sets out to introduce the concept of the female rambler into the contemporary discussion about the re-emergence of flaneuring and its bastard child psychogeography; often thought of as dominated by the self-declared ‘fraternity’ of Will Self: ‘middle-aged men in Goretex, armed with cameras, stamping out boots on suburban train platforms…’. Elkin does however not see the contemporary flâneuse as part of the edgeland explorers in the vein of Self and Robert McFarlane – for her, she is found in the city itself: ‘Not their limits, not the places where they become non-cities. Cities themselves.’

This book is however no paper on the gender imbalance in urban rambling as intellectual and artistic activity. Instead, ‘Flâneuse’ is at the same time critical assessment, walking memoir and a collection of fascinating female characters past and present that that accompany Elkin on her life’s journey from her teen years in a suburb of Long Island over stints in Tokyo and London to becoming a professor in Paris and French citizen. The women writers and artists accompanying and influencing her include Virginia Woolf, Jean Rhys, Martha Gellhorn, filmmaker Agnès Varda, artist Sophie Calle, and especially writer George Sand. And again, Elkin does not focus solely on pointing out the comparison between male and female ramblers and artists as one might expect; instead, she shows us how these women actively engaged with their cities through essays, film, images, protest. 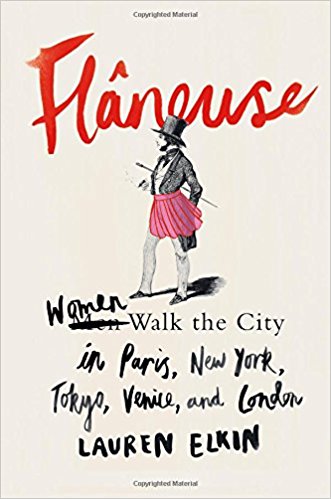 The main difference between the classical flâneur concocted by Baudelaire and Walter Benjamin – an exclusively male stroller blending in and taking solace with the crowd – and the flâneuse is that women, in Elkin’s view, always walked with purpose, to write, to map, to protest and support civil rights, to make the city their own. ‘The flâneuse is not merely a female flâneur,’ she writes, ‘but a figure to be reckoned with, and inspired by, all on her own. She voyages out, and goes where she’s not supposed to.’

The current re-emergence of the flâneur and flâneuse as ideas to engage with our ever-growing cities is not without criticism, as demonstrated in a recent piece by Josephine Livingstone and Lovia Gyarkye in New Republic, controversially titled ‘Death to the Flâneur’ and also partially structured around Elkin’s book:

‘Critics of identity politics would rather that knowledge were an uncolored thing. The flâneur offers a traditional and old-fashioned way to move through the world, and thinkers exploit his model when they lust for the lost universals of political thought. Anybody can be a flâneur, writers like Lauren Elkin say. Look at me do it. But the reason anybody can do it is that the flâneur is nobody.’

Yes, the flâneur as a classical bourgeois manifestation is surely out of place in a world where the distance between rich and poor is ever-growing and middle-class slowly but surely disappears, but that does not mean that flâneur, flâneuse and Benjamin’s concept of ‘botanizing the asphalt’ are out of date. This is also the case with Elkin’s book. In the end, this is less a critical engagement with the nominate role of the flâneuse in history and instead a fine ride – or better fine ramble – through the capitals of the 19th, 20th and 21st century and the female walkers inhabiting them. As Laura Bliss writes in her review of the book on City Lab: ‘But women have always walked, and on their own terms—even when society refuses to see them.’

Whatever label you use (if a label is indeed needed) – flâneuse, psychogeographer, deep topographer – the city and its environs need be open to all, regardless of gender, ethnicity and social standing. So anybody can be a walker of the city exactly because the flâneuse remains a nobody – until the first moment she interacts with her environment. Or, in Elkin’s words, the flâneuse remains ‘keenly attuned to the creative potential of the city.’

Marcel Krueger is a writer and translator based in Dublin and Berlin who often writes about places and their history. His essays and articles have been published in the Daily Telegraph, CNN Travel, the Matador Network, Slow Travel Berlin and many more, and he also works as Book Editor for Elsewhere: A Journal of Place. ‘Berlin – A Literary Guide for Travellers’ will be out on I.B. Tauris in the UK in July 2016. More info about Marcel can be found at www.kingofpain.org