Steven Salaita’s Inter/Nationalism is a powerful polemic, an incisive, insistent call to those would confront the ethical implications of the ongoing colonial oppression of Palestinians and the Indigenous peoples of North America. While this monograph is published by a leading academic press and is primarily aimed at academics, there is plenty of appeal here for politically-minded readers, activists, artists, and public intellectuals.

This work is a crucial and timely intervention, uncomfortably prescient insofar as Salaita offers a critical analysis of the rhetoric and policies of Andrew Jackson, a 19th century US president rightly excoriated here for the rhetoric that rationalized his genocidal treatment of Native Americans, and whom Donald Trump has identified as role model for his presidency. Moreover, Salaita’s status as a Palestinian-American scholar offered a faculty position in the American Indian Studies University of Illinois (Urbana-Champaign) only to have the offer withdrawn for tweets deemed in conflict with the university’s policy of “civility and decency” now appears deeply ironic in light of the rogue late-night Twitter escapades of the nominal leader of the free world. 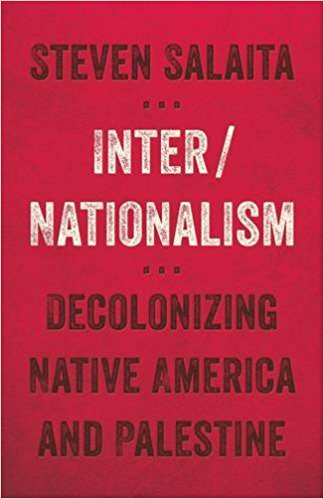 Salaita conceptualizes “inter/nationalism” as “an amalgamation of what is sometimes called solidarity, transnationalism, intersectionality, kinship, or intercommunalism.” Inter/nationalism is a theoretical framework aimed at exploring the relationships between the national liberation movements of Palestinians and of the hundreds of Indigenous nations that comprise the expansive and too-often reductive category of Indigenous peoples of North America. Drawing upon his background in literary studies, Salaita first looks to the work of Indigenous literary scholars who theorize Indigenous nationhood differently from the conventional nation-state and the attendant nationalisms of post-1492 Euro-American modernity. Rather, the Indigenous nationalism to which Salaita refers has emerged as a touchstone for contemporary Indigenous peoples’ social movements such as the Idle No More uprising of 2012, among others. In fact, it is argued, Indigenous nationalism, characterized by the collective peoplehood land-based cultural and political self-determination, precedes European contact and has been sustained through the centuries long history resistances to colonialism as a component of Anishinaabe scholar Gerald Vizenor has termed “survivance.”

Salaita’s notion of Palestinian nationalism is congruent with such ideas of Indigenous nationalism. Inter/nationalism is, therefore, a means to address the distinct but inter-related struggles of Indigenous peoples of North America and Palestinians insofar as the Canadian, Israeli, and US states utilize the discourse of “shared values” to underpin their political and military alliances. Unlike dominant forms of nationalism, it is a basis for solidarity rather than division. Indeed Salaita devotes significant attention to establishing the grounds for an interrelated critique of a colonialism rooted in the supposedly divine purpose (the alleged “New Canaan”) of American and Israeli displacement of Indigenous peoples in order to create a terra nullius for settlers. This includes a critical and comparative examination of the rhetoric of Zionist Ze’ev Vladamir Jabotinsky and the aforementioned US President Andrew Jackson, who both consigned the existing occupants of the territories they desired to the category of the backward, pre-modern, and, ultimately, subhuman. Dehumanization being a perquisite for enabling the brutality of colonialism and genocide, a stark historical reminder at a time of growing far-right populism and its naked racism and xenophobia.

Palestine has become a test case of one’s bona fides in American studies, ethnic studies, and other areas of inquiry—likewise in political and community organizations beyond academe… Anti-Zionism as a test case of one’s trustworthiness represents the ascension of Palestine into the consciousness of the political and academic Left and, more important, into the worldwide collective of Indigenous scholars challenging the structures and mores of academic convention[…]

The task of American Indian studies…involves constant attention to the seemingly benign iterations of land theft and dispossession. Adding Palestine to the mix intensifies the task, but to our enrichment, and, importantly, to the detriment of those invested in the colonial university.

The explicit argument here is for a reciprocal solidarity, not only between Indigenous and Palestinian academics, but also for those non-Indigenous and non-Palestinian peoples—academics and non-academics alike—who are moved by the ethical imperatives of attending to the circumstances of both American Indian and Palestine peoples.

But Inter/Nationalism does not solely rely upon academic theory. Salaita devotes a chapter to analysis of Palestinian themes in Native poetry, demonstrating the longstanding bonds between Indigenous peoples of North America and Palestinians.  In doing so Salaita investigates “cultural production to see how Palestine can be deterritorialized from its physical geography and in turn evolve into a type of inter/national symbology while remaining grounded in its own unique space.” His goal is to explore the inter/national potentialities of the aesthetic, creative responses to colonialism in order to “accentuate the vastness of dialogic possibility rather than reducing it to the vocabularies of neoliberal pragmatism.”

Salaita also offers a detailed insider’s description of the movement for Boycott, Divestment, and Sanctions (BDS) with respect to Israel, with a particular focus on the attention brought to bear the American Studies Association’s vote to endorse an academic boycott of Israel. Salaita proffers cogent refutations of the common arguments against BDS, and provocatively maintains that BDS “has a particular responsibility to American decolonization insofar” insofar as the imperatives of inter/national solidarity demand BDS “more generally attach to larger issues of neoliberalism, contingent labor, institutional racism, Native treaty rights, global decolonization, corporatized education, and academic freedom.”

Salaita’s prose is clear, direct, and relentless, and this is reflected in the book’s aesthetic. The fonts are blocked and bold and chapter titles include “How Palestine Became Important to American Indian Studies,” “Boycotting Israel as National Uplift,” and “Why American Indian Studies Should Be Important to Palestine Solidarity.” There is perhaps a temptation to describe Inter/Nationalism then as an example of political militancy, but this should not undermine confidence in Salaita’s intellectual rigor. Notwithstanding his detractors use of straw-man arguments and attempts at character assassination, Salaita’s academic bona fides are not in question: following the University of Illinois controversy he was named Edward W. Said Chair in American Studies at the American University of Beirut. Thus Inter/Nationalism ought be recognized for its contribution to the anti-colonial intellectual as it stands upon shoulders of Fanon’s theorizing of decolonization, and Salaita notes the influence of Edward Said, Vine Deloria Jr. Gayatri Chakravorty Spivak, Samir Amin, Sunaina Maira, Mahmood Mamdani, Patrick Wolfe, and Neferti Tadiar.

The subject matter of the book does not make for a comfortable read, but the aim is to unsettle the reader, to demand a confrontation the very real and profound ethical implications of intellectual and political responsibility. Inter/Nationalism is therefore simultaneously a worthwhile contribution to academic theory and a powerful articulation of the potentialities of inter/national solidarity. This is a notable feat at a moment where anti-intellectualism and progressive despair threaten to overwhelm, but Salaita’s work here ought to serve as a hopeful reminder of the ongoing and truly global resistance.

Karl Hardy is a sessional assistant professor in the Department of Languages, Literatures, and Cultures at Queen’s University on the traditional territory of the Anishinaabe and Haudenosaunee (Kingston, Ontario). He holds a PhD in cultural studies and is an editor, researcher, and writer.