“But every writer owes something to Holmes” T. S. Eliot wrote in The Criterion in 1929. The idea that every writer owes a debt to a fictional detective is wonderful and puzzling. The debt is not to Holmes’s creator, Arthur Conan Doyle, but rather to his creation, a man who can see and hear significance in minute details and thereby solve intransigent mysteries.

Readers of T. S. Eliot owe a great deal to some of the most astonishing literary detective work in the history of printing. Christopher Ricks and Jim McCue are unparalleled textual scholars and editors who have published editions of Eliot as well as critical works on Eliot. Their two volume edition of The Poems of T. S. Eliot is the first complete edition of Eliot’s poetry: all published and unpublished poems (such as those in letters) are collected here for the first time. Printed variants of the poems are presented in the “Commentary” and manuscript variants are presented in the “Textual History” to each poem, together with information about audio recordings and illustrations. These additions show us the revisions and decisions that Eliot made over a lifetime of editing and being edited by others.

This is the first time Eliot’s poetry has been collected complete, and the edition is complete for a number of other reasons. The two volumes trace the evolution of the poems, incorporate an extensive body of scholarship as well as unpublished sources, demonstrate monumental expertise in the adept recognition of allusions and literary interrelations, and correctly print some of Eliot’s poems for the first time in decades. New poems include those from letters, many of which are bawdy or obscene, as well as poems written to his wife, which are beautifully erotic and sexual. There are fascinating interlocutions between the profane and the sacred Eliot.

This is an edition fit for Eliot, whose mind was like a literary sponge. Eliot’s writing absorbed an enormous range of works, from music hall to Shakespeare, from travel writing (Baedeker) to French poetry; the “Commentary” traces these allusions as well as echoes between poems and the life in words around the poems. Within the notes to the line from The Love Song of J. Alfred Prufrock that begins “Politic, cautious, and meticulous” Verlaine is cited as well as a private letter from Ottoline Morrell to Bertrand Russell on T. S. Eliot: “He is obviously very ignorant of England and imagines that it is essential to be highly polite and conventional and decorous, and meticulous.” These are words behind the back of the poems and one indicator of the depth of understanding, not only from Eliot’s side but from the editors’. Ricks and McCue mention internet searches but the simple fact is that you can’t just Google these things. Many allusions constitute complex invocations of words, sometimes in other languages, distributed across several lines. For ears and memories like these, it takes the attention and labor of a lifetime.

In this sense, The Poems of T. S. Eliot is also not detective work because the “Commentary” is presented to us without interpretation or conclusion. As Ricks and McCue point out, their edition does not constitute “critical elucidation”; it is for us “to decide what to make of what the poet may have made of this” information. They have cited and acknowledged the substantial body of scholarly work; the sheer labor involved in this is impressive, as well as the generosity of current scholars who have contributed to the volume and who are acknowledged throughout for their observations. This conversation between critics – to which these volumes are a huge contribution – is again so appropriate for text dedicated to a poet who was also an editor and a critic and acutely aware of the fine lines between these roles. As Eliot wrote about his “commentary” to The Waste Land, “if the notes are indispensable then the poem is not quite written”. They “are no prophylactic against interpretation and dissection: they merely provide the serious researcher with more material to interpret and dissect.”

The complete research here is also in the unpublished sources consulted: Eliot’s letters, not yet completely published; unpublished letters and annotations by Pound and many other friends and colleagues; Eliot’s annotations in books; and editing by others, most notably Ezra Pound, il miglior fabbro. One of the most valuable editorial choices is the “Editorial Composite” of The Waste Land: all variants are collected together in a draft of the poem that never existed. Reading this composite depends on the extent to which the poem haunts our ear, as it does: Eliot is one of the most allusive of poets but also one of those most alluded to.

Any printing of any poem by Eliot from now on must use the texts presented in these two volumes. The Waste Land is now presented in its definitive printing; most notably, the last line of part II of The Hollow Men has finally been restored, having been widowed since its first printing. Commentary on Eliot will also necessarily refer to the research here; one of the most exciting vistas that these volumes invite is a new era of scholarship on one of the greatest poets of the English language. 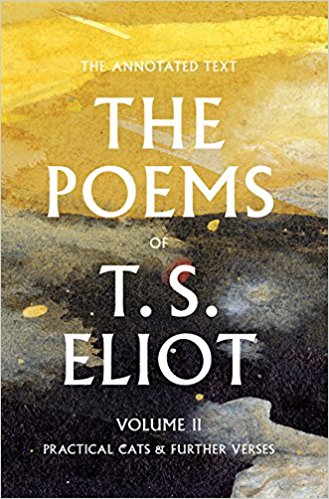 Eliot’s mother reportedly said to a contemporary poet, “Mrs. Kinsolving, I like your poetry, because I can understand it and I don’t understand my son’s.” For those who believe that mysteries are there to be solved or who find Eliot’s poetry laborious or weighty, these volumes may frustrate. These volumes invite interpretation: your reading is handed to you, though the weight of responsibility is passed to the reader. It is for us to think about what the invocations mean. In airing so many different voices, we are invited to give them a hearing, think of and about those echoes. The wealth of material presented here will add mystery and complexity to the great joy of reading Eliot, who wrote in his consideration of Dante that “genuine poetry can communicate before it is understood.”

Eliot wrote that “the critic to whom I am most grateful is the one who can make me look at something I have never looked at before…set me face to face with it and then leave me alone with it” (“The Frontiers of Criticism,” On Poetry and Poets, 1956). Readers of this definitive and magisterial edition of Eliot’s poetry will be grateful to sit face to face with so many things that have never been looked at or seen before. This is a gift for the ages.

Eldrid Herrington is an American writer and academic who lives in London.

One thought on “The Poems of T. S. Eliot”