Tom Lutz, And The Monkey Learned Nothing : Dispatches From A Life In Transit (University of Iowa Press, 2016) 240pp.

Sometimes it seems the world is getting smaller, closer and more interconnected. I can sit on one edge of the world in my office and, while I pretend to work or look out of the window, I can, using another kind of window, plug into conversations with people around the world, throw my useless opinions into the international public domain and read about societies and cultures I really know nothing of nor will ever experience. In some respects this shrunken electronic world gives me a get out clause for being a lazy or infrequent traveller. I no longer need to feign an excuse: instead of travelling physically, the world is coming to my place.

But whose world is it that comes through our windows?

In his new twist on travel literature And the Monkey Learned Nothing, Tom Lutz gives us a glimpse into his world and reminds us that the main difference between our own individual microworlds and everyone else’s microworld is that we are strangers in theirs and they are strangers in ours. With that context (or trope, as Lutz refers to it) in mind, we are cautioned that grandnarratives – so dominant in travel literature – don’t really exist. What there are instead, however, is an infinity of entertaining and transformative micronarratives to be found in every corner of the world. Lutz sees these as examples of the sublime. 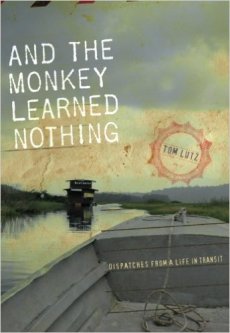 And open up a world of the sublime Lutz certainly does.

The scope and ambition of Lutz’s book is remarkable, with sublime micromoments recounted from literally all over the world. A Yak Stew Cafe in a Chinese city that is “destroyed” in a silent riot. The entertaining though totally transparent con artists in Mysore. A woman who becomes his shadow in South Korea. Bargaining and trading in Mugabe’s Zimbabwe. The night time horse riders in Russia. The Merry Cemetery in Romania with 8 feet tall markers over each grave eulogizing the buried with the oddest of rhymes and colourful images. The book is an exhaustive guide to nothing, an anti-grandnarrative, but it is an encyclopedic collection of snippets showing the richness and strangeness of the micronarratives of everywhere and everyone, perhaps the only kind of narrative there really is. And the Monkey Learned Nothing will be one in a series of four in Lutz’s incredibly ambitious travel project, a project which could quite literally be endless. It is the perfect text for the coffeetable or bathroom, to be read in stimulating snippets rather than cover to cover.

Nowhere on the planet is perhaps as versed in the pain of the subliminal as Cambodia. Of this elusive place Lutz captures what seems impossible to capture: the everydayness and normality that often characterizes our experience of even the severest pain. Would we really feel so matter of fact about having lived through, and continuing to live through, Cambodia’s recent histor?. Maybe we would have no choice. A similar consideration is provoked reading about Lutz’s travels in El Salvador. We confront normality punctuating what seems like hell. In most cases there is hope in every anecdote and possibilities for the future. In a few cases, such as Lutz’s encounter with a young Uruguayan mugger, there is only sadness.

On the Georgian-Azerbaijani border there seems enough material for at least a whole book. The impossibility of trying to understand how the Visa entry system works is beyond or perhaps beneath even the subliminal. There is an interaction just as odd on the Moroccan border. What is it with borders and immigration? If only we did away with them, travel would be so much easier. Lutz’s book is drawn to such spaces which are both literally and metaphorically on the borders, the edges and peripheries which can often give us a lot more to think about than the central spaces that so often dominate travel literature.

Lutz tries to make sense out of the Guyana election, where the political demonstration he witnesses seems so sublime it could almost be a Trump rally. Noise, threats, jokes, more threats, even more noise. In a later exchange Lutz asks a local what he thinks would be the best outcome, to which the local gives the the answer: Jimmy Cliff. This gave me a whole new outlook and made me wonder if there are not in fact many political questions to which ‘more Jimmy Cliff’ wouldn’t be an answer at least half-right. There are many of such thought-provoking moments in Lutz’s book.

The book’s title comes from a visit to Indonesia. Monkeys, you see, are not well respected by Lutz. “Instant Gratification Hooligans “ is his description of the primates in question. I part company with him on this! Without ruining the story, a Monkey encounters a German tourist, some bananas and a pair of glasses with highly humorous consequences. The stand-off and subsequent bargaining, recounted in fantastic comic style, shows the Monkey as smarter than his homo sapien rival but presents him in a terrible ethical light, or so Lutz see it. I’m not so sure. The Monkey is performing for the tourist, as if he knows that his culture and society can no longer exist without them, as is the case for many of us. Tourism and travel may seem less arduous in the 21st century and we may share more cultural reference points with those we visit, but in essence travel may be no different to the kind that Swift recounted for us. When we look into strange worlds we think we see Houyhnhnms, but we really see ourselves.

Lutz’s title may have this self-reflexivity and it is prominent in his book. Lutz the narrator is highly visible and this may be what is ultimately most special about the book, which attempts not to teach us anything about other cultures but to explore the intersections and interrelations between ourselves and other people and places. If Lutz’s travels reveal a reflection of the traveller, then his book can itself be a kind of travelling for the reader too. If you’re wanting to understand yourself a little bit more then certainly try Lutz’s book…and maybe a little Jimmy Cliff.

Tom Lutz recently gave a series of readings from this book and from Drinking Mare’s Milk on the Roof of the World in Hong Kong, including at the Hong Kong Literary Festival and at HSMC.

One thought on “And The Monkey Learned Nothing”