Lucas Ballestín analyzes the politics of the hipster, looking to dispel assumptions and use psychoanalytic intuition to explore new ways of thinking the much-hated figure as a response to contemporary political and social conditions.

Depending on whom we ask the contemporary hipster sub-culture either resurrects the counterculture of the 1960s, extends a long history of bohemianism, or represents the apex of a new bourgeois voided disposability. The term itself has been used for decades, but it has gained new application in the past decade or so. It is applied to generally well-to-do young people who congregate in urban hamlets and isolate themselves from the main streams of popular culture. They tend to dress in ways that are distinctive and highly personalized; prize independently produced music, and display a passion for combining items of refinement and craftsmanship with an overall lo-fi aesthetic. “Hipsters reject the culturally-ignorant attitudes of mainstream consumers, and are [often seen] wearing vintage and thrift store inspired fashions, tight-fitting jeans, old-school sneakers, and sometimes thick rimmed glasses.”

At worst, the hipster is presented as an embarrassment to their nation, a destructive consumerist, and due to their fascination with cultural pastiche, as an impoverished avatar of repressive desublimation. Some have even dared to refer to the hipster as “the end of Western civilization” itself amongst many other similar slights. In the face of everything that is broken, the hipster caparisons herself within a protective nest of pre-packaged identities, material creature comforts, and a peculiar sense of ornamental superiority. Against this, I wish to approach the issue with a psychoanalytic intuition, seeking to ask searching questions, whet existing presumptions, and finally to provoke an open discussion about a series of unrelated issues which may find their intersection under the name of the hipster. 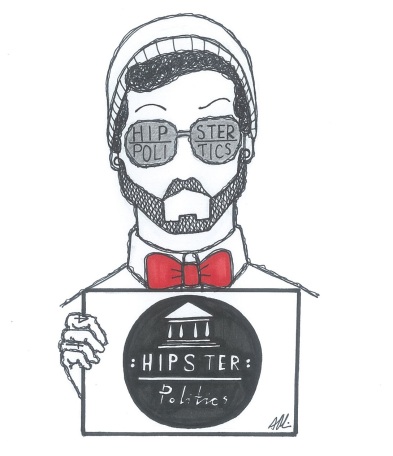 Image for the HKRB by Hazel Lai

Indeed, the hipster’s characteristics: at times ironic, often nihilistic, and invariably avoidant, makes her a prime candidate for a certain kind of symptomatic reading. What I have in mind is one of the most consistently perplexing phenomena of the psychoanalytic clinic: the psychic retreat.

The psychic retreat denotes a length of time during which patients in psychoanalysis withdraw mentally from the work to bring the progress of therapy to a standstill. During these times, the efforts of the therapist to provide interpretation are rejected and the course of free association is interrupted. In other words, psychic retreat refers to episodes of passive resistance the part of the patient. Those styled by psychoanalysts as “concrete” patients resist the underlying operation of the talking cure: the making of meaning as such.

Resistances of this kind are normally triggered when the object of the analyst’s interpretations strikes too closely to the “pathogenic nucleus”, or group of traumatic ideations that carry with them an association to negative affect. The trouble is that this antidote does not succeed, for it only creates an oscillating movement that does little to remove the intruding tension. It rather masks it, even doing so poorly, by triggering a flattened withdrawal to the surface of speech, a divestment from significance. In the end, the psychic retreat is not so much a purposeful obstruction, but a symptom of a very specific species of anxiety.

One would be forgiven at this point for wondering what any of this has to do with hipsters or their plot to end western civilization. In the next section, I will invite us to transpose the concepts elaborated just now onto the terrain of contemporary cultural capitalism. In so doing, I will frame the presumed nihilistic actions of the hipster with a climate of economic instability, identificatory insecurity, and systemic ossification.

In this day and age, capitalism has not merely eroded feudalism and regulation to its own full upgrowth. Having digested its own marketing campaign, cultural capitalism no longer markets goods to consumers; it markets identities to them. Personal identity is no longer a substantial set of character traits based on deep-seated beliefs, it would seem, but is rather an aggregation of store-bought paraphernalia. We are what we wear.

The hipster’s position within all of this is tough to allocate. Nevertheless, our discussion of psychic retreat may be of promise. Could it be that the hipster’s apparent withdrawal from civic engagement and ‘authentic’ counter-culture is itself a reaction against the unintelligibility of such a resistance in a milieu that offers scarcely a place to gain one’s footing enough to push back against it?

In other words, our nemesis here is nothing other than indefiniteness of relation fostered by breakneck speed cultural commodification in capitalism. Under scrutiny, we see that the move from affirmed belief to disavowed acquiescence is not a question of opposites, but rather the obverse faces of one phantasmic construction. And the interest of the analyst is to uncover, in a conservative fashion, what the phantasmic duality is meant to do.

I think the effort undertaken by our nihilistic hipster is the effort to be able to resist the irresistible hegemony of standardized diversification by inheriting the tradition of modifying and customizing. Most every author writing on the hipster makes some reference to the hipster’s economic position. I prefer to underscore the unoriginality of the hipster’s economic and moral struggles, presenting her as a subject of a fastidious cultural capitalism, faced with precariousness, commodification, and insurrectionary failure.

In other words, this is what we want to call the compromise formation par excellence. We are dealing with a properly Freudian fetish structure. This is why the nihilistic hipster is a Kantian; she wants to make room for something – for the absence of value, as a place from which the inevitability of the market’s valuation is disarmed.

The hipster’s acting out is elicited by the admixture of post 1960s fatalism with an urgent disgust with the state of cultural production in their own time. The disgust is directed at the ease and absolute power with which the commercial apparatuses have come to be indistinguishable from authentic self-creation. But, at the most base, I want to contest the view of hispterism as empty status-anxious recyclage.

If the cadence of conformity is compliance, the rhythm of insurgency is curation. Hipsters disdain uniforms, and they see pop culture as little more than a camouflage for individuality. The kind of individuality that was suppressed during the calamity that was the last century, the century of our recent ancestry.  Their object then, is anti-fascism as a way of life, as lived flesh-encased practices. Novelty at every moment, memorabilia at every moment. But more than both, a signature style.

The temptation avoided here, from a hipsterian viewpoint, is that just because capitalism can co-opt one should stop creating. Creation, the artistic forte, is not taken as impotent, only as fragile. Invent frenetically, the imperative seems to be, but invent according to no persistent logic – induce contradiction, invite imitation, refuse to license your agency.

Underpinned by the confidence it can somehow outrun the Machine, the hipster loses no time forsaking the played out and going back to the drawing table, it dumps the husk of the passé to create again, the appropriator is perpetually behind the curve, and as a consequence the vein on which it feeds offers nothing but what’s stale, the fangs of the feeder provide no nutrition, the asphyxiator gets all choked up.

I would like to suggest that the hipster, when read symptomatically, with the evenly-suspended attention that Freud recommended, appears much more interestingly invested in the life courses and accouterments of their choice than we might firstly suppose. Resenting a climate of instability and commercialization that characterizes the climate in which they live, the hipsters react by co-opting the appropriators, in a sense – turning the game against the system.

Driven by the awareness of the eager trend analyst observing the ‘market’ as if through a crystal ball, the hipster understands that any bona fide endorsement of a product or activity makes that activity liable to be taken away from them.

The hipster of our interest is not clueless about what they like, or at any rate no more clueless than I am, nor do they find it morally objectionable to confess to one’s proclivities as such. Rather, we sense a fear that to retain, let alone affirm, one’s individuality, in their specific material cultural way, all the while inhibiting the unstoppable process of commodification, the hipster must give it away so as to keep it.

Lucas Ballestín is a Philosophy and Historical Studies PhD student at the New School for Social Research. He’s currently at work on a project about the question of defense in the thought of Jacques Lacan.

The featured image on this post is by Hazel Lai. Hazel is an undergraduate student of English at HSMC, Hong Kong. Her art can be seen at her Instagram page.