We are at such distance from the 1990s that nostalgia for the era is an easy feeling to muster; especially if, like I did, you came of age during that time. In our post-9/11 world of conflicts, uprisings, political balderdash, media manipulation, and disillusion with modern existence, the 1990s in retrospect feels like some kind of bygone golden age. In fact, all of the above was true of that era, and before, but at the time and in retrospect, we felt we had it so good that who really cared about all that, right? With the Democratic nominee Hillary Clinton currently in the running for the Presidency of the United States, her husband, and former President, Bill Clinton faces a resurgence of interest, and a possible political re-evaluation of his tenure that might erase some of the more scandalous (personal and political) aspects of his presidency in favour of a rosy reappraisal. Like she did on numerous occasions during his presidency, Hillary could be Bill’s savior once again.

Gil Troy’s The Age of Clinton: America in the 1990s could be easily be accused of promoting a glowing vision of the Clinton decade. Taking in the political era and matching it up with the shifts in popular culture is an ingenuous approach. Troy takes in the people and places where the wave of social changes and librations began, the ever changing faces and attitudes of the decade within America and outside, and trailing the key players of the decade; Kurt Cobain, O.J. Simpson, Timothy McVeigh, Newt Gingrich, Rush Limburg. 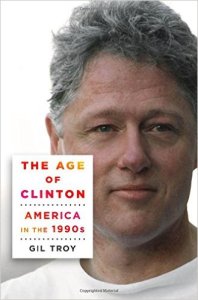 Thankfully it is a rollicking exploration of the decade; and illustrates acutely how difficult it was for the Clinton Administration to keep abreast of the constantly changing moods in American society. The book takes the reader though each year of the decade and unpacks the events of each. Sometimes these events are small; even seemingly insignificant to the wider world. Nonetheless, this is the decade that brought the internet to the majority of households, and the results that this seismic invention had, and still maintains on the political and cultural landscape is revealing. When Clinton’s misdemeanors with White House intern Monica Lewinsky are revealed, the early incarnation of internet gossip, trolling, leaks, and opinion pieces all become present. Clinton’s presidency was hardly dissimilar to any of his predecessors failings, controversies, mishaps, and sexual hang-ups, but for the first time in history all the trappings of the Presidency were unfolding in real-time. The age of Clinton is also the commencement of the age of the personal takedown.

Shockingly, Bill Clinton received the moniker of ‘the first black president’, a disarming epithet for someone who publicly backed the rights and advancement of black Americans, yet in policy disenfranchised an entire generation of black, predominantly poor and predominantly male Americans. The phrase was first used by author Toni Morrison to illustrate that Clinton had grew up in similar circumstances to many Black-Americans; growing up in rural farmlands, principally poor, and living within a troubled household. Clinton owned the moniker knowing full well that his life may have started in similar circumstances, but his skin colour allowed him a ticket out, where none existed for others.

In Super Predator, author Nathan J. Robinson quite rightly holds the Clintons (mostly Bill, but Hillary comes in for some criticism too) to account on their record of using and abusing black issues, internally for the most part, but also exploring foreign policies. The book is incredibly in depth and well researched and makes for a shocking read, shocking in that the Clinton’s somehow still maintain a congenial relationship with black voters despite their blatant best efforts to disservice them in policy. 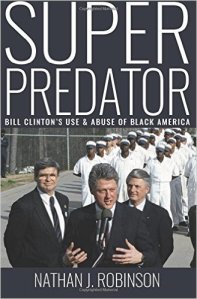 Whilst Super Predator at first glance is the most damming account of Bill Clinton’s presidency; putting to rest any doubt that his tenure was a benevolent one, The Age of Clinton also allows for an undoing that simmers under the surface of its 1990s appraisal.  Super Predator ensures that the reader understands that the Clinton’s played black issues to their own advantage, but in The Age of Clinton, it shows that the Clinton’s were savvy at playing the times to their own advantage; using issues relating to crime, gender, race, economics, education, and popular culture as springboards to enact their own agenda. With Hillary Clinton in the running for President and with reports circulating of her own (mis)conduct whilst serving as Secretary of State under Obama, it is vital that critical light be shed on the Clinton phenomena. Thankfully, both these titles offer informative, well researched, and at times innovative approaches, with Super Preadator certainly the more critical success of the two.

Stephen Lee Naish‘s writing explores film, politics, and popular culture and the places where they converge. His essays have appeared in numerous journals and periodicals, including Gadfly, The Quietus, Empty Mirror and Scholardarity. He is the author of U.ESS.AY: Politics and Humanity in American Film (Zer0 Books) and the forthcoming Create or Die: Essays on the Artistry of Dennis Hopper (Amsterdam University Press). He lives in Kingston, Ontario with his wife Jamie and their son Hayden.