Sean Mahoney reviews Dave Hill’s analysis of the London Mayoral elections and discusses how it looks now through the prism of post-Brexit.

There was a moment in the recent London Mayoral election at which both the main candidates were attending a debate at the Institute of Directors. They walked onto the stage to The Clash’s “London’s Calling”. If you hadn’t felt before that point that the London Mayoral race was occurring in a Lewis Carrolesque rabbit hole, it was now official.

The London Mayoral election of 2016 occurred less than four months ago, and yet – looking back through the broken post-Brexit prism – it seems like an eternity. Dave Hill’s short book on the contest, published at great speed,  captures some of the essence of that campaign and its still-important resonances. Indeed, on closer inspection,= the London Mayoral election reflected the pluralist challenge that the UK is still struggling to get to grips with.

Hill sets out the idea that all of London’s complexity is represented in the contest. Goldsmith a green organic old school Toff by day and eco-warrior by night. The Metro outer London man, against Khan an urban, working class immigrant, lawyer by day and guardian of the disposed by night. Are there really two Londons so opposed to each other? Of course not, and the view of two Londons is misleading. Goldsmith gave the impression of being, well, otherworldly. Would any other politician, standing for the largest directly elected position in the country, make a campaign trip to McDonalds and call a big mac a “tempting little object”? Goldsmith – who only eats Organic pork – seemed a little out of his comfort zone.

Khan had his moments of being ill at ease as well. For the Labour candidate, who had signed a nomination paper for his leader Jeremy Corbyn, he seemed uncomfortable even mentioning his name. Khan was not Corbyn’s man. Unless you listen to Goldsmith, who insisted that he was. 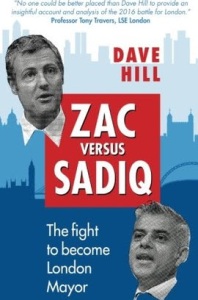 The campaign has been seen as a one-sided contest. Khan was in the lead from the start (though he was not the early favorite for Labour). Labour had polled well in the 2015 General Election in London and Boris Johnson’s legacy wasn’t to leave a strong Conservative case for Mayor. People voted for him, in spite of his party rather than because of it. Khan did his best to represent himself and distance himself from Corbyn. He portrays himself as someone who can work closely with Cameron’s Pro-European cause, distanced from Goldsmith’s Euro scepticism. Attempts to portray him as a looney radical just didn’t hold with the electorate. He clearly wasn’t that, and is more Blairite than Corbynist. The British Labour party now seems to be a series of parties. The membership, London, Corbyn-istas, the PLP, Scotland (well maybe more a dinner party) and Wales. For all the Crosby led hysteria that was to be thrown at Khan, little of it stuck.

Goldsmith sent mail outs to Tamil families warning of an impending Jewellery Tax. It was a tenuous link from a fares freeze to John McDonnell’s obvious tax raising desires to supposed Tamils with jewellery. There was also claims that Khan had supported Corbyn, who supported a ban on Indian Prime Minister Modi. Did it work? Clearly not in terms of turning the result around. Why it was tried was even stranger. Many of his supporters stood back, even his sister seemed unsettled. The Conservative 2015 playbook of small targeted fears was being given another go. The world seemed to stand back aghast at this fear mongering. Many of his hoardings resembled those of Michael Howard back in 2005 (another Crosby fail) Was Goldsmith running a racist campaign? It became a ping pong for the cognoscenti. Some may have even seen it as the last roll of the dice for project fear, well at least for another 6 weeks.

Then came the moment the campaign will forever be remembered for. Not Racism or Euro scepticism, but football. Both Khan and Goldsmith took a taxi driver test. The idea of either of them doing the black cabbie knowledge would have been interesting, but this was actually a BBC journalist imitating a black cab driver asking trivia questions. Khan knew who played at Selhurst Park, Goldsmith did not know who played at Loftus Road. Man of the people 1, out of touch gentry 0. *

*The answer is of course: some footballers

One thought on “Zac Versus Sadiq”