Sean Mahoney reviews China expert Jeffrey Wasserstrom’s latest collection of essays juxtaposing Chinese history and culture with some Western counterparts. Wasserstrom’s book is revealed to be a potentially crucial one for international relations.

In 2008 a China–New Zealand Joint Venture called Sanlu was found to have been distributing contaminated infant formula milk. A large number of children developed kidney stones and, tragically, six children died. Milk powder producers went into damage limitation mode. Three of the directors of the joint venture company were swiftly sentenced to death. The New Zealand Prime Minister refused to interfere to avoid creating any disturbance. Paranoid at the risk to New Zealand’s Milk exports, he saw the executions as an internal matter for the Chinese. However, at the same time he was making threatening statements to the tiny Pacific Island of Fiji, over what some might easily term its own ‘internal’ political matters. China, it seems, creates moral and political uncertainty in all of us and is a place we tend to deal with very tentatively.

As the European Union enters another period of crisis, China once more looks to be an increasingly important power on the world stage. It is more than ever the case that the world revolves around China and its markets. China and its excess capital create uncertainty in us all but also make fools of many of us, often at one and the same time. Jeffrey Wasserstrom’s book provides a fascinating lens through which to look at China and is a book that could be incredibly important going forward into the future of relations between China and the West. The many versions of China offered up to us through our own lenses often provide far too simplistic a viewpoint. China is so often the consumer, the producer, the exporter, the importer, the marketplace, the trader. Yet, Wasserstrom’s book teaches us: it is also a hell of a lot more that these economic categories. 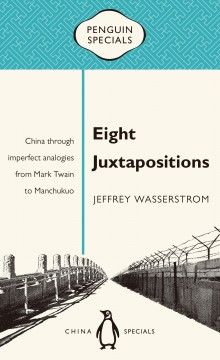 China sometimes seems almost lonely in the World. It doesn’t comfortably compare with any of the West, nor does it easily group together with the other countries of Southern Asia. As such it has no clear comparators, which makes analysis of China all the more challenging. Wasserstrom doesn’t let that stop him and at heart it is the essence of the book. The world easily slips into double standards when considering Chinese actions and culture, and several of the eight essays in this short collection tease these contradictions out, not only giving us a new way of looking at China but also showing us the limitations of our own Western viewpoint.

In the essay “Chicken or Beef”, Wasserstrom humorously and seriously considers Chinese dining menus to be a metaphor for the political marketplace. One menu choice indicates compliance, another choice indicates criticism of political norms. Some, though, eat from both sides of the menu. China is either seen a ruthless world dominator, or considered to be about to implode. Often we can choose bits of both and get away with saying simplified contradictions about China. Whose China is this though, Wasserstrom asks? He shows that China’s power lies in more subtle and less obvious forms often neglected by these methods of interpretation. As Wassertsrom notes there is a hungry vegetarian waiting for the third option, the hidden menu. My vegan dining taste found this both appealing and hopeful. Is the hidden menu a synthesis of A and B? No: its more a reminder that we shouldn’t frame our analysis around the menu choices of others.

In “The Flat and the Bumpy” Wasserstrom shows how China and the ‘rest of the world’ are getting nearer and nearer to each other. Again this is shown to be a highly complex relationship. Is it one of dominance, for example? And if so, who is dominating who? The example of almost interchangeable new years celebrations is used, not to reflect domination of one or the other but to perhaps challenge the assumption that there is even a clear-cut contest?  Reading this book I wonder whether globalization bring us closer or farther apart. We are swapping cultural reference points but the recent spate of swells in anti-immigration voting intentions and associated increase in nationalist posturing in both Europe and the US suggests we aren’t increasing our understanding. Wasserstrom’s book is a timely intervention against these dangerous currents in our discourse.

China is often analysed as a political behemoth, clunking towards certain collapse. Yet it was this apparent likely expiry that has been at the heart of its salvation. The fear of collapse made them adapt, the Russians who seemed to have certainty and continuity on their side were less fearful of collapse and therefore less adaptive. The Chinese Communist Party is a living organism, adapting to survive. For Wasserstrom, the irony is that China and Russia now share more similarities than when Russia also had a ruling Communist parts, it seems, is less ideologically pure than philosophy. This is explored at some length with an essay comparing Pope Francis and Xi Jinping. The cult surrounding powerful leaders is universal. The Peoples Pope, with his slightly 20th century reference points and portrayals, still leads one of the worlds most authoritarian and conservative movements. Big Papa Xi is omnipresent, the “Chairman of Everything” leading another authoritarian and conservative movement. Both hopeful for everlasting iconography. All revolutions, it seems, end in religion.

There is a challenge for us all contained in this book. Wasseerstrom’s Rip Van Winkle, sleeping for 20 years at a time, will awaken in 2032. What kind of China will he see? More importantly though, what kind of China will we be allowing ourselves to see? I wouldn’t discount that even if the most glorious of juxtapositions between economic capitalism and political communism is no longer on show, there will be other major challenges and contortions for us to come to terms with. I only hope Wasserstrom is on hand to guide me.

One thought on “Eight Juxtapositions”