Marcel Krueger  discusses writing, life, and treading on Rachel Adams’ dress in his review of Neil Gaiman’s new non-fiction collection The View from the Cheap Seats.

Legendary and prolific Weimar Berlin writer Kurt Tucholsky once said: ‘I am not curious – I just want to know everything.’ Looking back at the over 30 years of Neil Gaiman’s work and an equally prolific output spanning short fiction, novels, comics (or graphic novels as they’re called these days), children’s and YA books, audio plays, films, and singing in bands, the statement could have easily come from Gaiman as well. First and foremost known as genre and cult author of comics and fantastic literature, he has in recent years also broken into the cultural mainstream with his 2013 novel The Ocean at the End of the Lane and his often- quoted and widely disseminated commencement speech Make Good Art given at the Philadelphia University of the Arts in 2012. 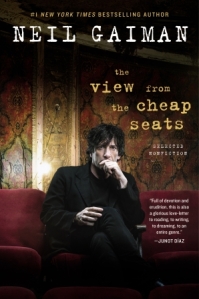 Gaiman has over the years also acquired a fantastic knowledge of folklore and popular culture, and his output is always steeped deeply in mythology and the works of his literary predecessors, for example modeling the character (and place) of Fiddler’s Green in the Sandman comics on G.K. Chesterton, for whom he also made up a quote for the first page of his novel Coraline. But these references, the undercurrent of backstories and Gaiman’s extensive knowledge are, in his fiction at least, only marginally visible, at best hinted at. Which is quite fitting for a fantastic writer, with the topic itself being described by the Oxford English Dictionary amongst other things as ‘imagination; the process or the faculty of forming mental representations of things not actually present’.

Luckily, for those interest in the more concrete details of Gaiman’s craft, interested in those books and films and comics that influenced Gaiman, this first non-fiction collection is now available. But unlike the collected non-fiction of Kurt Tucholsky, from which the above quote was taken, this does not represent the whole of non-fiction published by Gaiman to date. Instead, we are presented with what Gaiman calls a ‘motley bunch of speeches and articles and essays’ in his introduction, sorted by chapters like Some Things I Believe (which contains his ‘credo’, published after the Charlie Hebdo massacre, and pieces about his love for libraries and bookshops), On Comics and Some of the People Who Make Them, or Introductions and Contradictions. In here are some of the many introductions he has written over the years, and only the books listed in this chapter would make a fantastic reading list for anyone inclined to purchase or borrow all the works introduced here. I for one am currently trying to convince my wife that spending two weeks during the summer holidays just reading on the couch is a holiday well spent.

What we find in here, then, is Gaiman not being put through the ‘arts blender on ten’, as his wife, the musician Amanda Palmer, once described their different ways of making art. Here are some of the tools from the writer’s shed at the end of the garden, and many of the (sometimes obscure) idols, influencers and friends that have shaped Gaiman’s work over the years.  At the same time, there is a whiff of the autobiographical in this book, most evidently represented by the structure: it begins with a dedication to Gaiman’s newborn son Ash, lists the author’s beliefs and credo, introduces us to his friends and influencers and then moves on over his work experiences in the fields of comics and music and finally closes with longer, sometimes sadder pieces about the plight of Syrian refugees and an furious eulogy to his friend Terry Pratchett. A warning for those who expect to find more  Gaiman fiction in here: you will be disappointed. There is the odd piece straddling both fiction and non-fiction, like the excellent Halloween piece ‘Ghosts in the Machine’ originally written for the New York Time, or the Sim City video game easter egg SIMCITY, one of my favorites in here. The remainder is journalism, and outstanding essayist-navel-gazing in the best tradition of Michel de Montaigne.

What I like best about this collection and its assembly is the unabashed enthusiasm and the fanboy that shines through in every single piece, even the darker ones. Here is Gaiman prophesying the decline of the comic industry, bemoaning the loss of friends like Diana Wynne Jones and Terry Pratchett, and even treading on Rachel Adams’ dress when attending the 2010 Oscars at the anniversary of his father’s death, described in the piece that the book’s title is taken from. Here is Neil Gaiman the human writer, struggling and despairing, and not the counter-culture idol put on a pedestal as human manifestation as Dream of The Endless.

And yet this is a positive book, about how hard it is to make good art and the importance of having a credo and friends to keep you going, whatever your profession is. I will not put it next to the Gaiman novels in the shelf. Instead I’ll leave it on my desk next to Tucholsky and Montaigne, to have it at hand in case I need Gaiman’s advise on certain aspects of life. As he puts it in the 2004 Harvey Awards Speech: ‘There’s a whole cool world out there. Use it.’

Marcel Krueger is a writer and translator based in Dublin and Berlin who often writes about places and their history. His essays and articles have been published in the Daily Telegraph, CNN Travel, the Matador Network, Slow Travel Berlin and many more, and he also works as Book Editor for Elsewhere: A Journal of Place. ‘Berlin – A Literary Guide for Travellers’ will be out on I.B. Tauris in the UK in July 2016. More info about Marcel can be found at www.kingofpain.org