Promise Li reviews Victoria Pitts-Taylor’s new study of the dialogue between feminism and neuroscience and assesses her argument for a new compatibility between the two.

The Brain’s Body adds refreshing insights to a much needed, but still nascent, dialogue between neuroscience and feminist studies. As author Victoria Pitts-Taylor notes, despite the frequent points of compatibility between the two discourses, they often speak past each other. Pitts-Taylor suggests that neuroscience and affective embodiment, as explored by recent feminist and cultural scholars, are intimately interconnected. The “heteronormativity of scientific models and practices” (6), which often results in a biological determinism, obfuscates the material implications of this science, namely that the brain, as highly “complex and multiple”, is constantly self-organizing and “materially performative” in an aleatory fashion. The quotidian, embodied experience of each individual plays a determinant role in the ever-developing constitution of the brain. Engaging with the recent debates in these fields, Pitts-Taylor understands the material brain as always in becoming; both neuroscience’s and affect studies’ shared impulse to turn towards the ‘micro-architectural’, to seek deeper within bodies, should directly result in conclusions that affirms “the multiplicity of the neurobiological body and the specificity of embodied lives” (15). 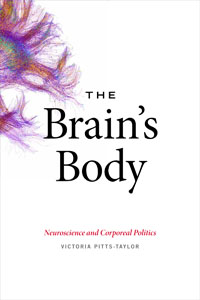 For Pitts-Taylor, a critical understanding of the plasticity of the brain adequately posits the material basis for Judith Butler’s performative theories of human body. The development of the brain is materially and discursively performed, always inherently relational and can be “transformed by and affect events.” Pitts-Taylor also invokes Deleuze’s theorization of the contemporary world as ‘control societies’ that figures new systems of power and control “to target the body for modification and rewiring”, emphasizing that the conclusions of neuroscience as both susceptible for “freedom or control” (18). Through this, she interrogates the problematic presuppositions of neuroscience that leads to neuroreductionist conclusions, viewing them as “explicitly linked to the identification and prioritization of social problems that are entangled with race, gender, and class inequalities” (39). The brain as embodied is both a “site of difference as it is a site of commonality” (45). But what does that mean in reality, the fact the bodies and experiences are heterogeneously lived? These different embodiments, as Pitts-Taylor argues, in fact lead to different “patterns of treatment from the world” (57). She takes disability models as a site that demonstrates the entanglement of the materiality of the body with its relational sensibilities. The text explicitly engages with phenomenology here to emphasize the lived experience, or to invoke the title, the ‘corporeality’, of the brain, describing social body-configurations like disability as being in “a relation that is temporally and spatially specific – a particular coupling of mind/body and world” (61).

In chapter three, entitled ‘I Feel Your Pain’, Pitts-Taylor engages with the recent discovery of ‘mirror neurons’ to both critique its reductionist interpretations while also positing alternate theorizations that can be compatible with the embodied mind. Mirror neurons give a sort of neuroscientific basis for ‘affect’, illustrating that individuals’ emotions can be directly influenced by those experienced by others in proximity. However, proponents of a certain ‘simulation theory’ argue that mirror neuron research still renders the mind as disembodied and autonomous. Characterizing mirror neurons as a sort of ‘mind reading’, these theorists see them as a ‘detached theoretical activity’ that emphasizes individual mental knowledge over “affective and corporeal experience” (75). Pitts-Taylor ruminates on the 1999 incident of the police shooting of the unarmed Amadou Diallo to detract the simulation theorists, critiquing their attempt to theorize mirror neurons as simply “a biological substrate for empathy” (71). She argues that an uncritical treatment of mirror neurons leads to a problematic belief that they reliably posit a scientific basis for sociality and normalized human relations. In the case of Diallo, he was tragically killed because one of the officers thought he was pulling out a gun from his pocket (he was in reality reaching for his wallet and ID) and shot him, leading to a chain reaction in which the fellow officers all fired their guns as well. Pitts-Taylor takes this example to show that “an embodied reality” is always tied in to “social contexts of persistent inequality”; she writes, “the potential for conflict, misunderstanding and violence should not be set aside” (92). Neuroscience can potentially serve as an unwitting accomplice to perpetuating problematic ideologies, a tendency Pitts-Taylor attempts to neutralize through theories of embodiment.

Lastly, Pitts-Taylor discusses a specific example in which neuroscientific findings can be especially fruitful for rethinking social formations. Intervening in queer and anthropological explorations of new forms of kinship, she argues that potential for non-normative kinship relations cannot be divorced from the biological element, pace Kath Weston and Judith Butler. In fact, she suggests that queer kinship studies should be attentive to neuroscientific discoveries, averring that theorizing for new kinship formations must also ‘rethink what it is to be biologically related to one another.” (99) She traces ‘maternality’ as a material bond that is enacted by its stylized, material performance through evolution. Invoking her conceptualization of the brain as always in becoming, always affected by one’s situated embodiment in the world, she suggests a ‘post-genetic world where kinships can no longer be captured by genetic relatedness.” (116) Addressing this new conception of the world and power-relations that is rooted in the micro-level of the neuron, Pitts-Taylor turns the reductionist and essentializing implications of neuroscience on its head, instead demonstrating the possibility for affective embodiment through the language of this scientific discipline.

The Brain’s Body confronts the often internecine relationship of neuroscience and feminist and cultural studies. By elaborating a corporeality of the mind and its inextricable social and political effects, Pitts-Taylor effectively engages with both the phenomenological interests of queer theorists like Sara Ahmed to Jack Halberstam with the skeptical sentiments against the increasing turn toward a new form of essentialism in the sciences like Rebecca Jordan-Young’s intervention in 2010’s Brainstorm. As she shows, the presuppositions of neuroscience, if unexamined, introduce new manifestations of power to perpetuate social inequalities. Pitts-Taylor’s text situates as part of a recent critical effort to address the ideological concerns that is inscribed within the auspices of technological and scientific innovations on the human body, from Dorothy Roberts’ critique of the racial implications of the medical sciences to Beatriz Preciado’s provocative text Testo Junkie that reveal the reification of sexual difference through hormonal studies and pharmaceutical industries. Like these other interventions, Pitts-Taylor’s treatment of the brain as embodied enacts a hope for non-normative social relations from the discourse of neuroscience itself. The Brain’s Body’s relevance and importance lie not only in this re-positioning of affect in neuroscience, but also in that, like Jordan-Young’s Brainstorm, it deeply challenges the very presuppositions of the science itself, and how they function, in a burgeoning discipline that codifies our bodies and mind more intricately than ever before. The text delineates a hope for neuroscience in feminism and progressive politics, without uncritically lapsing into empty espousals of either or both. As Foucault would agree, this deeper entanglement of our bodies into a knowledge system calls for new and more attentive critiques of these discourses – a task that The Brain’s Body rigorously takes on.

Promise Li is a student at Occidental College, where he studies the intersections of critical theory, late medieval and early modern literature and culture, and queer/performance studies. He is serving as an editorial assistant at Decalages, a peer-reviewed academic journal devoted to scholarship on Althusser, and as an editor at Critical Theory and Social Justice Journal for Undergraduate Research.