Joel Swann is reviewing a series of 21 international poetry books published by The Chinese University of Hong Kong Press under the series title Poetry and Conflict.

For the critic George Steiner, the awful experiences of western modernity gave the poet a simple role: to remain silent. For enlightened humanist may understandably think that poetry and literature would have an ameliorating effect on humanity, teaching us sympathy, emotion and common decency. Adorno famously argued that the emptiness of such artistic and cultural idealism was shown by the fact of Auschwitz; a demonstration that Steiner turned into an imperative in his ‘Silence of the Poet’ (1966):

It is better for the poet to mutilate his own tongue than to dignify the inhuman either with his gift or his uncaring. If totalitarian rule is so effective as to break all chances of denunciation, of satire, then let the poet cease (and let the scholar cease from editing the classics a few miles down the road from the death camp).

When reading this collection of poems by Mohammed Bennis, Steiner usefully reminds us that the combination of silence and poetry has an importantly political potential. Even if a poet who continues to write must inevitably disagree with Steiner’s (admittedly perverse) conclusion, something like this resistant silence makes an appearance in Bennis’  ‘Frivolity’, three terse stanzas repeatedly insist, ‘Don’t ask him anything’ –

Don’t ask him anything

he casts away his own blood

and leaps towards forgetting

If a poem naturally raises questions, the suggestion is that there is no fit audience to meaningfully engage with them. The distant and de-humanised ‘he’ is a dangerous distraction: indifferent to the living ‘blood’ of the present, while running headlong into a future without a past, there is no hope of culture finding a proper home. Silence refuses to provide fuel for forgetting. 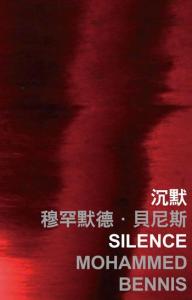 More generally, silence can take on many forms for Bennis, and becomes important when it takes a place in the little fragments of narrative that make up so many of these poems. In ‘Silence’, it is a kind of blank canvas with warmly positive connotations. There, the silence that ‘rises from the warm / stone’ is the setting for human community:

Here we construct with laughter

a dwelling place and we

shall depart in company with

the flight of the radiance

that flows from the horizon

If silence isolates and separates out a ‘here’ from elsewhere, it risks a sort of fetishization of absence, distantly implying that an ‘annihilation of all that’s made’ is what’s needed to create afresh. But to ‘construct with laughter’ suggests that a naturally unpredictable responsiveness is the proper basis for creation; with the ‘radiance’ of silence supporting the raucousness of human noise.

Silence appears as a starting point, but it can also do so as a prohibition to escape from – ‘Impurity’ quietly describe an escape from being ‘haunted by silence / with ecstatic purity’, finding that ‘A nothingness / that was telling me / Do not write / is withdrawing’. Or, silence may just be part of a process, as in ‘Blindness’, where writing leads ‘to the heights of my breath’ and to ecstatic experiences. At the high point it finds –

and under the silence

word from which birds launch out

and their flight conducts me

Silence operates within the remarkable metamorphosis of writing – from the animal or fastening of ‘seal’, to butterflies and birds. ‘Blindness’ gives us another kind of absence, or nothingness, but coming at the end of the poem, it doesn’t know whether how to feel about it. Silence has given rise to something incredible, and while there is every chance that blindness will too, only experience will show whether it does or not. As such, the power of Silence may be as a corollary to Steiner’s instructions: silence is not only negation or euphoria; it is about getting ready for something else.