What we want to avoid at all costs is something that is common inside both academic and journalistic discourse; that is, criticising the popular from an imaginary privileged position of knowledge, and even setting up this imaginary position in the process, making it seem as though we can speak from somewhere outside of these discourses.

The above quote, taken from the introduction to the magnificently titled Twerking to Turking: Everyday Analysis Volume Two, encapsulates what is superb about the Everyday Analysis Collective and their enquiry into the banal minutiae of contemporary culture. The Collective are a group of students, scholars, writers, artists and activists pulled from all corners of the Earth, and are attempting to lower the highbrow of critical theory with short and snappy essays that deconstruct social and political life in an accessible, bit-sized format. They have only been operative since 2013, yet here we are already on Volume Two of the group’s collected writings, just a year or so after Volume One, Why Are Animals Funny? (2014) made a small but significant splash. The writings here are more confident, vibrant, funny and lucid than that previous effort. With such a diverse range of subjects covered it is difficult to offer a constructive and concise review of everything covered in this volume. The term ‘something for everybody’ certainly applies, yet hardy goes far enough. Žižek, Derrida, and Lacan, sit side-by-side with Cowell, Gosling and Geldof, a mash-up of high and low culture which could, in other philosophical hands, have proved unwieldy. 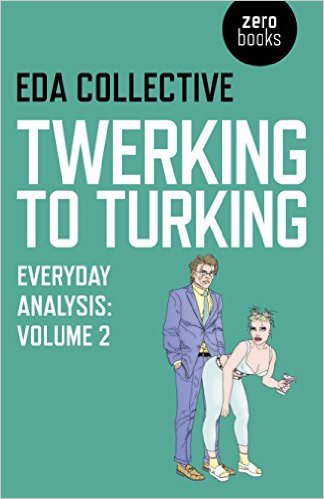 Helpfully, the Collective have broken their analyses down into fields of interest: art, film, sports, work, digital cultures, sex and love, books and comics. This array of subjects offers an easy way in for the prospective reader, who can dip into the text at random and bounce from subject to subject at will, a literary equivalent to skipping television channels or, perhaps more fitting, surfing the internet. Rarely do the essays exceed 1,000 words; some barely scrap past 500. Perhaps this is increasingly the only way to grab the attention of an internet-obsessed generation who can’t get through a EDA post without simultaneously opening a tab for Boredpanda.com to look at pictures of cats sleeping on top of dogs. A number of essays in particular stand out. ‘Getting Google’s Approval’ is sharp in its assumption that Google is silently disapproving of your search topics, especially those it considers depraved. ‘Sending Shit to UKIP’ documents the UK populace’s juvenile, yet hilarious, ‘dirty’ protest at the politics of the far-right UK Independence Party. Dissenters took advantage of the party’s freepost address to send it an assortment of unsolicited gifts, ranging from bricks to faeces.

Whilst a majority of the subject matter is overtly party political, some of the items are more subtle. The section devoted to sport, for example, digs deep into issues of racism in football (‘Croatian Football and Racism’ and ‘Dani Alves: A Banana Used as a Banana’), and the spectacle of the sporting event (‘Loving Football’ and ‘World Cup 2014: Sky Sports Live! and Alain Badiou’s “Event”’). The section marked ‘Miscellaneous’ explores the ridiculousness of modern life with essays on social awkwardness, ‘On Almost Bumping into Someone when Walking Around a Corner’ and ‘On Seeing Yourself on a Big Screen’ are particularly cringeworthy ruminations on how we react to ourselves and each other in modern society.

However, no matter the subject, a spectre haunts Turking to Twerking: the spectre of David Cameron and Nick Clegg. It seems to me that a collective such as the EDA could only exist and thrive in Austerity Britain. Their currency is the the sheer absurdity of the past five years, of nation ruled over by a toff version of The Office’s David Brent and a feebler Gareth Keenan at his side. The EDA Collective embody this schism in history; their work wouldn’t resonate so well in any other recent political era. There was genuine warfare under Thatcher’s iron rule, and only satire, or straight-up violence could explain and dispel it. Under Tony Blair’s New Labour the nation was caught up in its own exhilaration at once again being Cool Britannia to question the pillars of society. And why on Earth would we? We were also prosperous under New Labour, at least for a short while. In 2010 the United Kingdom decided to experiment with a form of sitcom style politics in which we as a nation collectively played the straight man. In the wake of the comedy of errors dealt out to us over the past five years, we have become more questioning of our leaders’ motives. We have become partial to other forms of political engagement, through protest, Occupy, online social media, music and street poetry. We are finding new avenues to communicate with one another, and are reclaiming language from the idiotic soundbites of political discourse.

We are looking everywhere – and in the case of EDA, at everything – for answers, and finding them in the most mundane of objects and situations. Political criticism and incisive commentary are no longer coming out of academia, or traditional outlets such as Newsnight or The Andrew Marr Show. Through social media we are transcending the old forms, and opening the argument up to all. And this argument will not go away now we that we face another five years of austerity measures – this time with an absolute Conservative majority. We will need the EDA Collective and their like to continue to articulate, with wit and humour, our resistance to the cruelty of austerity politics. 4 out of 5.

Stephen Lee Naish‘s writing explores film, politics, and popular culture and the places where they converge. His essays have appeared in numerous journals and periodicals, including the arts and culture magazines Gadfly, The Quietus, Empty Mirror, Everyday Analysis andScholardarity. He is the author of the essay collectionU.ESS.AY: Politics and Humanity in American Film (Zer0 Books) and the forthcoming book Create or Die: Essays on the Artistry of Dennis Hopper (Amsterdam University Press). He lives in Kingston, Ontario with his wife Jamie and their son Hayden.