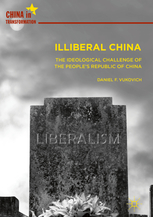 Daniel F. Vukovich’s Illiberal China: The Ideological Challenge of the People’s Republic of China has a clear message: the People’s Republic of China has never been liberal, nor is it going to be in the foreseeable future. While this assertion may not be new for readers familiar with Chinese politics, Vukovich’s contribution lies in the ways in which he perceptively gives context and nuance to it. He sets out to investigate the contemporary Chinese political culture by revealing the implications of seeing China as a “problem.” As he explains, China is a “problem” in at least two senses: first, as a part of the globalised capitalist economy it is “maddeningly illiberal” (7), an alien and an abnormality in the universalism of generic capitalist liberalism; second, because of the inadequacy of liberalist parameters such as freedom, individuality and human rights in making sense of it as a political entity. These observations underlie the timeliness of Vukovich’s book, which sheds light on a rising, complex and illiberal China. As the author explains throughout the book, illiberalism should not be used as a pejorative, xenophobic shorthand to dismiss the legitimacy of Chinese political culture, but should instead serve as a premise upon which we can start to fathom the very different historical, social, cultural and material contexts of contemporary Chinese politics.

Consisting of six chapters, the book works through key concepts in global political theory – including liberalism, neoliberalism and de-politicisation – and presents two detailed case studies of recent protests, in Hong Kong and Wukan. Vukovich’s primary concern lies in knowledge production. Seeing politics today as “largely a battle over discursive terrain” (13), he critiques the “political orientalism” that permeates English-language discussions of Chinese politics: a conviction that indexes China as an “ugly, unfree, and non-liberal regime” (21). As Vukovich points out, the binary discursive construction of liberalism versus illiberalism is premised upon the consolidation of “illiberal” as “an un-interrogated ‘concept’ defined as not-liberal or not-me” (22). As a result, it lacks explanatory and analytic power. In order to flesh out the term, Vukovich offers a re-definition of “illiberal China” that is worth citing here in full:

What […] makes China truly “illiberal” is not repression and conservatism or the like but its very positioning, its self-positioning and self-understanding, as being anti-liberal on principle; it sees liberalism as an enemy and this is what in the end makes it illiberal. (27)

For Vukovich, this definition affords possibilities to analyse China beyond the tired terms of dismissal and debunking, thereby teasing out the “positive and interesting, complex and ambivalent aspects” of Chinese illiberalism (18). This analysis is informed by the new left, which “focuses on real as opposed to formal equality and on the legitimacy – and the reclaiming – of the state (as against the market principle)” (202).

This critical perspective yields thought-provoking findings. In his analysis of the 2014 Hong Kong Umbrella Movement, Vukovich attributes the long-standing antagonism between Hong Kong and Beijing to a false belief in convergence: whereas Hong Kong holds the hope that China will one day transform into a “normal” liberal democracy, the Beijing side is also expecting Hong Kong to converge with “the irresistible force that is the sovereign mainland and its magical economy” (133). Vukovich suggests that this convergence thinking has given rise to a particular vision of politics in Hong Kong: a “proceduralist and legalistic” understanding of democracy that focuses on formal equality (139). As a consequence, Hong Kong’s political culture lacks a sustained discourse on social democracy and equality. Big business and property developers dominate the city; as do the forces of economism and de-politicisation. Hong Kong’s current situation, Vukovich posits, reflects the limits of market-based, laissez-faire capitalist liberalism. For Hong Kong to achieve effective politicisation, social movements that challenge a tycoon-appeasing capitalism are key, but they are yet to emerge. Vukovich’s concerns also have resonance in the recent anti-extradition bill protests. Reflecting on these protests, Yu Pun-hoi, editor of the local online news portal HK01, has also commented that what Hong Kong truly needs is a “structural reform” to address its deep-seated social problems (Yu, 2019).

In contrast to the political situation in Hong Kong, Vukovich delineates another, more promising, manifestation of democracy, to be found in the 2011 protests in the village of Wukan in Guangdong. He observes how, in their protests over land seisures by local officials, villagers tactically invoked a model of “rightful resistance” to pursue specific demands and goals (168). By triangulating native illiberal and foreign liberal narratives, and by using foreign media as a vehicle for communication, the villagers positioned themselves against corrupt local cadres rather than the regime itself, thereby asserting moral leverage in interactions with the state (181). Vukovich argues that this strategy of appealing to the state’s own self-understanding and the basis of its legitimacy in social justice not only enabled the villagers to achieve their goals of land redistribution and voting power, but also gestures towards a locally specific “shadow civil society” in China (181). He suggests that the Wukan protests can become a template for protests in China, through which the people can reclaim the economic and challenge the Party-state’s powerful investment in neoliberalism and capitalist developmentalism.

Offering a historical and practical analysis of contemporary Chinese political culture, Vukovich’s book is an informative and extremely interesting read, especially for its consistent challenging of liberalist presumptions. While the book presents a striking argument as a whole, it also leaves some minor yet important questions unanswered. For example, how could the Wukan model be adopted in a new, more anti-protest era in China to generate real, practical social change? What strategies would be effective for Hong Kong to retain its “cultural autonomy” (159) if it were to move on from liberalist politics? These questions are pivotal to a practical understanding of Chinese illiberalism and merit further discussion and unpacking. On the whole, Illiberal China is an important contribution to the fields of China studies and critical theory, and a must-read for anyone interested in contemporary Chinese political culture.

Lin Song holds a Ph.D. in Gender Studies from The Chinese University of Hong Kong. He is currently a postdoctoral fellow at Faculty of Social Sciences, University of Macau. He researches and teaches in gender and sexuality especially in relation to media, popular, and digital cultures in contemporary China and East Asia.