Ariana Reines’s new collection begins with an epigraph from a late, untitled poem by Paul Celan: “No more sand art, no sand book, no masters.” Since the collection itself is titled A Sand Book, the epigraph seems to proclaim against the very book it opens, as if placing the whole volume sous rature. It’s an audacious gesture from a poet who has made audacity one of her calling cards, but probably a purposeful gesture as well, for—as Celan among others realized—we do not trust poetry that is not at least a little mistrustful of itself. We, too, dislike it. “Writing beautifully made me feel like a fake,” wrote Reines in her previous book, Mercury. 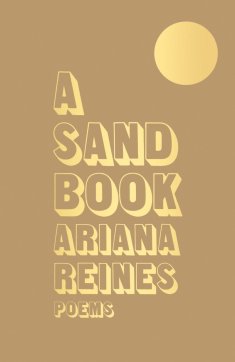 A Sand Book raises the question of trust the more insistently by participating in two traditions that rely on the poet’s credibility with the reader: confessional poetry and visionary poetry. Both traditions ask the reader to invest attention, thought, and feeling in the exploration of the poet’s unique experience, on the speculative bet that her experience is genuinely revelatory. Attempting both at once is doubly audacious, for the two are not that compatible. Confessional poetry lives in the foul rag and bone shop of the heart, staring fixedly at the limitations, humiliations, and failure of individual personhood. (See, for example, the poem Reines titled “Confessional Poem,” the first piece in a section titled “The Saddest Year of My Life.”). The visionary tradition vaults the cosmos and vacates space and time, individual personhood annihilated in the radiance of being. (See, for instance, “Mosaic,” the final poem in A Sand Book.) Can Reines persuade us that she is a prophet at the same time she is exposing the full extent of her folly and fallibility?

She can. Reines is one of the small set of poets who can be grounded in all-too-human particularity even as they are transported by vision. Thomas Traherne or William Blake come to my mind, or, to name more recent instances, Allen Ginsberg, Jack Spicer, or Laura Riding. Riding may be a particularly helpful reference point, since like Reines she is a poet whose work feels exposed and occulted at once, both confessional and hermetic. Like Reines, Riding had doubts about the vocation of poetry—she renounced it in her late thirties—and wrote, as Reines seems to, out of a conviction that poetry ought to be about the truth if it is about anything, however Delphic the utterance may be. As Reines asks in “To the Reader”: “Can you take / Seriously one at once so arch and so // Strange, so frank and yet so withholding? / I’ll wager that you can.” Riding made a similar wager. Reines is irreverent on the subject of Mallarmé, the grand wizard of the hermetic (“he writes I swear to God / Badly on purpose”), but as with Riding her confessions emerge from an aura of enigma:

We never find out what “it” is, nor what the word was, making it hard to account for why the admission seems so candid. “I try openly to hide only badly whatever it is I think is wild that I’m / Doing my best to reveal by not really hiding though hiding,” as Reines puts it in “Dream House.”

The candor that so vividly marked Reines’s Coeur de Lion and Mercury continues in A Sand Book: “My period / Started in American Apparel Outlet” (“25 August”), “Apparently I have a body that produces a lot of blood” (“Nine Moons”), “A few months ago my mother told me that my father raped her,” though “My mother says many untrue things” (“Alcibiades”). Right alongside this mode, however, we have the visionary mode, sometimes on the facing page. The imagery in “The End of Me” is so down-to-earth it approaches the abject (“Decided not to replace / The loaded tampon […] My sheer red / Panties were on the small side & / Rather chafey”), but the following poem, “I Had an Idea of Symmetry,” approaches the mystical:

But in a way I had

To become an idiot

In order for what

(I will relate it)

So I tell myself

I mean contrives many

Routes to the unseen

But turns out to be

The defamiliarizing experience recalled in these lines, a stripping away of accumulated selfhood (“in a way I had / To become an idiot”), may be the one recorded in the book’s final poem, “Mosaic,” but it may be some other similar moment; Reines more than once finds herself in what Celtic spirituality called a “thin place,” where the distance between this world and another all but disappears.

No language, as every mystic has lamented, is adequate to these occasions; all languages are, as English is, an “awkward conveyor” to the “unseen.”  “I say what I see,” Reines declares, “This is my power’ (“Thursday”). A Sand Book provides a great many examples of Reines’s power of saying what she sees, from the tampon “drying like a dead animal / Beside the bed” to “The fulminating ochre slot I watched opening in the clouds / Thru which we could all at once perceive the sun / Waning like the fires in an old black oven.” The volume attempts also to say what is not “seen” so much as it is experienced or encountered, aspiring to “something / Like the reconciliation / Of empirical and spiritual / Truths at last in / Like real time.”

The book’s final text, “Mosaic,” has a foreword explaining that it “is the transcript of the verbal portion of an encounter” that occurred one afternoon on October of 2014. “The words aren’t ‘mine’,” Reines specifies, and they do have a channeled, oracular otherness to them that is emphasized by being rendered entirely in upper case and in white print on a black ground: “DIFFERENCE IS MEANT TO BE COMEDY / DIFFERENCE IS A TOY,” reads one page, “WHEN FACED WITH EVIL / LEARN ITS SECRET” reads another. “Mosaic” is the trace left by the kind of moment that William James wrote about in the “Mysticism” chapter of Varieties of Religious Experience, and readers will come to their own conclusions about the revelations it offers. For this reader, “Mosaic” stands as the boldest, bravest work to date of a never-timid poet.

“THIS IS WHY THE OTHER WORLD / HAS ALWAYS NEEDED TO BE CREATED” announces one page of “Mosaic.”  As chance would have it, I read A Sand Book at the same time I was reading Giorgio Agamben on inoperosità (“inoperativity” in most English translations), a concept Agamben connects to that of the New Testament Greek word katapausin, or “rest,” as it is tamely rendered in the King James Version. Inoperativity, a kind of blessed purposelessness, is what makes heaven heaven. Agamben writes:

A model of this operation that consists in making all human and divine works inoperative is the poem. Because poetry is precisely that linguistic operation that renders language inoperative—or, in Spinoza’s terms, the point at which language, which has deactivated its communicative and informative functions, rests within itself, contemplates its power of saying and in this way opens itself to a new possible use.

In other words, yes, this is why the other world has always needed to be created. Reines opens us to new possible uses of language, and may she long continue to do so.

Paul Scott Stanfield was educated at Grinnell College and Northwestern University, and has been a member of the English Department at Nebraska Wesleyan University since 1989. He is the author of Yeats and Politics in the 1930s and of articles on Yeats, other Irish poets, and Wyndham Lewis.