Matthew Kovac reviews a timely re-examination of the violence that underscored Europe’s imperial and colonial ventures.

Empire is enjoying a moment in the sun, at least in the not-quite-former metropoles. The endless Brexit deliberations are fuelled by imperial nostalgia, with half of Britons reporting ‘pride’ in their colonial track record. Oxford University has embarked on a much-derided project to explore its ‘morally mixed’ legacy and distil a ‘Christian ethic of empire’ – never mind that generations of colonists easily reconciled their violence with religious zeal. French far-right leader Marine Le Pen has renamed Front Nationale after an anti-Algerian party from the 1960s. And in the United States, Donald Trump has yearned for massacres during the Philippine-American War to set a precedent for modern counterinsurgencies. 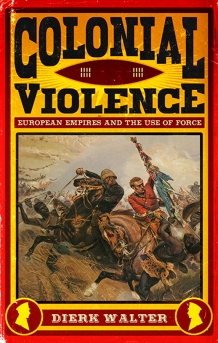 All of which makes Dierk Walter’s latest work, Colonial Violence: European Empires and the Use of Force, especially timely. Walter’s historical argument is straightforward, and for those on the left, relatively uncontroversial: the bloody wars that marked European expansion after 1492 share fundamental traits with contemporary military interventions in the Global South, most recently by Western forces in Mali and Afghanistan. While the pretexts and firepower may change, he argues, this mode of violence has remained consistent through the centuries.

Paul Kramer and Isabel Hull have done much to explain the brutality of colonial violence by highlighting the role of Euro-American racism and ‘extremist’ military subcultures in fin de siècle wars in the Philippines and Namibia, respectively. To these cultural analyses, Walter adds an invaluable material dimension, reminding readers that colonial wars past and present are shaped by the conditions in which they are fought. Drawing on environmental history, he argues persuasively that climate and terrain are key to understanding the extreme violence of European expansion.

Walter does not simply march from one war to another in a dreary 500-year slog, however. He identifies patterns of colonial violence and summons scores of examples to test his case, drawing connections between Pizarro’s conquest of Peru, Javanese resistance to the Dutch, and the Maori Wars. Along the way he debunks myths about Europeans’ alleged military and technological superiority. Firearms were not a game-changer until the “breech-loader revolution” of the 1840s, and colonisers relied more heavily on indigenous allies than they ever acknowledged. Indeed, self-congratulatory Spanish reports from South America credited their victories to a few hundred conquistadors – erasing the thousands of indigenous troops they fought alongside (88-9). This is global history at its most masterful, traversing centuries and continents many times per page without sacrificing coherence.

This dynamic style is in keeping with Walter’s lively conceptual approach to history, which emphasises bottom-up agency and contingency in imperial expansion. While he refutes the notion that Europeans seized their empires ‘in a fit of absent-mindedness’ – a trope notably deployed by Bernard Porter – he does show how small imperial detachments, operating with little oversight from the metropole, often went beyond their brief, as when promotion-minded French Marine officers conquered the Western Sudan in the 1880s. Just as Nazi functionaries ‘worked toward the Führer’, in Ian Kershaw’s memorable phrase, Walter demonstrates how empire, too, was a grassroots affair, with the individual initiative of settlers, merchants, and soldiers paving the way for more bloodshed.

But it is Walter’s political conclusions, as much as his historical insights, which hold the key to our present moment. Even as Brexiteers downplay the brutality of the British Empire and American nationalists persist in the delusion that theirs was – and is – a Jeffersonian ‘empire of liberty’, Walter’s study shows that colonialism was massively violent by definition. Projecting power across the globe is an inherently repressive enterprise, incapable of rehabilitation. Indeed, he writes, human-rights-based apologia for 21st century wars should ‘not command any greater claim to credibility than … the “civilising mission” of the nineteenth century’. Many in the metropoles favourably contrast Western military interventions today with what they imagine as the naked aggression of past colonial conflicts. But even in the bad old days, aggression was always cloaked by discourses of freedom and rights remarkably similar to our own (126-7).

National exceptionalists in the U.S. and Europe want to divorce empire from its everyday violence, to blame especially brutal colonial governors or racist settlers for their ‘excesses’ – as if an antiracist, pacifistic world domination was possible. This includes liberals for whom drone-bombings ordered by an Obama or Macron are self-evidently more legitimate than the gauche thuggery of a Trump or Le Pen, even if ‘humanitarian’ interventions and rapacious oil wars look the same to those beneath the bombs. But Walter’s critique is uncompromising. His litany of atrocities is a needed reminder that the empire of liberty and mission civilisatrice are, and can only ever be, contradictions in terms.

Matthew Kovac is a writer and historian from Chicago. He recently completed a Master of Studies at the University of Oxford and now works for a civil rights group in San Francisco. His historical research focuses on Irish veteran reintegration and paramilitary violence in the wake of the First World War. Follow his work @MatthewKovac.