Harry Yi-Jui Wu reviews a collection of essays that discuss the often disorienting impact of the introduction of Western biological and medical sciences to East Asia.

On 7 August 2018, high-ranking officials of Tokyo Medical School bowed to the public in front of a fury of flashing cameras. They admitted that for more than a decade, the School has been altering the entrance examination scores of prospective female students. Institutional discrimination against female medical hopefuls reflects the mystification of healthcare authorities in the Japanese society, a longstanding problem that few are willing to confront. 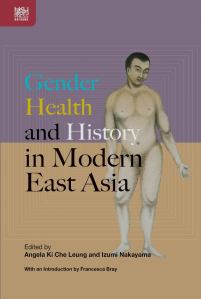 Gender, Health and History in Modern East Asia is a mixed scholarly account edited by Angela Ki Che Leung and Izumi Nakayama. This book covers nine case studies that confirm or challenge historiographical and sociological representations about the relationship of gender and health.  Readers will be intrigued by neglected stories buried in history regarding how, in Japan, Korea, Taiwan and China, gender categories shaped the production and practice of health knowledge, and how emerging problems of modernity in these societies impacted the clichéd gender roles from the second half of nineteenth century to the present day. For the general readership, this book may be challenging because of its range and manifold concerns. However, the complex material is rewarding as it goes beyond general assumptions of gender categories and their implications on health sciences in East Asia.

Given the topics covered, ‘health knowledge or ‘health sciences’ instead of ‘health’ could be used in the title. Each of the nine chapters, written by a historian or a sociologist, adopts a distinctive analytical framework, angle, and scholarly language to narrate compelling stories of a concept, disease, discipline, and even the life of a medical professional. Each chapter is a pleasant read. However, one might need to be familiar with terms such as ‘biopower’, ‘biocitizenship’, ‘biopolitics’ and ‘biosociology’ in order to engage with the ideas presented.

The volume comprises three sections, starting with the knowledge and technologies of reproduction in four different historical and geographical contexts: Meiji Japan, Republican China, post-millennium Taiwan, and South Korea. Izumi Nakayama analyses how the condition of ‘precocious puberty’ was conceived against the backdrop of modern state making. Jen-der Lee analyses how the pedagogical paradigm of sex education was designed as a negotiation between the traditional Chinese culture and modern nation. Chia-Ling Wu discusses how new types of parenthood in the democratised Taiwan have influenced the development and regulation of assisted conception. Jung-ok Ma analyses the regulation of assisted reproductive technologies in South Korea contingent on fertility decline and the lobbying of infertile couples.

The second and third sections of the book present different case studies, in which gender roles are moulded through health disciplines and health practices. In particular, several chapters discuss how health practices are formed alongside gender roles. Despite the binary approach used in structuring the chapters, such as positioning women as family health-caregivers against masculinity in the military, the authors analyse how their research subjects yielded to or resisted traditional gender categories. Susan Burns discusses the medicinal market created for women under the Japanese empire. Sean Hsiang-Lin Lei analyses the success of an exceptional female practitioner of traditional Chinese medicine, particularly how her business flourished within the traditional ‘housewife’ stereotype. Angela Ki Che Leung shows how the knowledge of beriberi was embedded in the deliberation of food knowledge and gendered lifestyle. Howard Chiang offers a landmark study on the first sex change surgery in the Republic of China’s military, while John P. DiMoia studies the militarised character imposed on men in South Korea’s family planning project.

A highlight of the volume is the introduction written by Francesca Bray, an outstanding historian of gender and technology. Bray opens the book with an insightful, clear, and intricate analysis of the theoretical controversies and empirical puzzles in contemporary scholarship of the history of gender and science, technology and medicine. Bray explains that historians who work with the idea of East Asia ‘require a confident grasp of difficult languages, extensive literatures, and complex histories as well as of the immediate geopolitical context’ (3). It is therefore understandable that, apart from a few transnational attempts, the majority of the studies in the book still focus on ‘a single nation or its immediate zone of influence’ (3).

Apart from Bray’s poignant critical assessment, this book falls short to prove that the scope of East Asia as analysed is larger than it claims to be. Howard Chiang’s study of the first sex change surgery in ROC military is an exception rather than rule. Historically, Nanyang is an important area where sex reallocation surgeries were conducted either as a counter practice against the gender norm on the outskirts of the British colony, or as an opportunity for individuals with low socioeconomic status in coastal China to pursue changes in their destiny. Additionally, Angela Leung’s chapter mentioned that Southeast Asia, as part of the colonial Dutch Indies and British Straits Settlement, was the focal area in the construction of beriberi knowledge and search of treatment. However, the importance of these locations are excluded even in the chapter title. The deliberate exclusion of Southeast Asia or Nanyang in this book can be contrasted with the ‘Science stars of East Asia’ feature published by Nature (27 June 2018 issue) that includes many female scientists from Singapore and Malaysia. The journal’s regrouping of East Asian scientists shows the dynamics of gender and geopolitical identities in the region.

This book is unquestionably a substantial scholarly volume that examines the intersection of gender, health sciences, and technology in modern (or the comparatively modernised parts of) East Asia. Yet, it might go against the expectations of readers who wish to learn about disparate health conditions resulting from the social history of gender inequality in the region. This perhaps unintentional overlooking of gendered injustice and historical subtleties is unsettling.

Harry Yi-Jui Wu is Assistant Professor in the Li Ka Shing Faculty of Medicine at the University of Hong Kong.

One thought on “Gender, Health, and History in Modern East Asia”