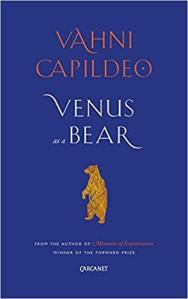 Winner of the Forward Prize for their earlier poetry collection Measures of Expatriation (Carcanet, 2016), Vahni Capildeo has returned with a sparkling, humorous and impressive collection of poems, Venus as a Bear (Carcanet, 2018). Fans of Björk will immediately recognize in the title a reference to the Icelandic singer’s 1993 song “Venus as a Boy.” Taken from the singer’s debut studio album, the song borrows elements from Indian music like the use of the tabla. Less recognizable is the collection’s reference to London’s Stinky Bear Press’ earlier DIY-zine from 2013.

Also named “Venus as a Bear,” the zine was a tribute to Björk – a project in which Capildeo was also involved. The title of the collection itself therefore bares hints not just to Capildeo’s academic background, but to the Icelandic research that she carried our during her DPhil at Oxford, as well as her Indian-Caribbean heritage. This polyphonic approach is set up with the opening epigrams, referencing the French poem “Faune et Flore” by Francis Ponge and Gertrude Stein’s “Objects.” True to mission, Capildeo’s eye inspects both inanimate objects and natural life, from around the globe, in what a review in The Guardian compared to Romantic “cross-cultural investigations into the natural world.”

Evidence of Capildeo’s wide-ranging knowledge and deep intellect runs throughout the collection. Split into seven sections, Capildeo’s book ranges from verse inspired by “Creatures” (the first section), by other works of art (“Shameless Acts of Ekphrasis,” the second section), the sea (“Sea Here”) and other objects from nature and elsewhere. These reflections are multi-layered and intelligent: “Brant Geese” for example considers “a Brant goose, a burnt bird, a bit / shorter than other editions of / goose.” These geese are “confusable with barnacles, / those goose-cousins considered fish / by Friday-famished Christians.” The poem refers to the etymology of the Brant goose, named for the Old Norse brandgás (burnt, black) – referring to the dark colour of the species. Until recently, the Brant goose was considered to be the same species as the barnacle goose, which Catholics used to eat on Friday since barnacle geese counted as fish. Such insight into eclectic facts coincides with a playful onomatopoeic rendering of a gaggle of geese that “open a bubble of babble / swagger and swallow a vowel / turd it turn it shine it slime it…putting it bluntly: goose to geese.” This interest in medieval sources and foundational literatures manifests itself as well in “After Hávamál” and “Four Presents with Petrarch,” two poems that reach across time and “Langues/Tongues” (the title of the third section) which draws on  Old Norse and Renaissance Italian poetry for inspiration.

Useful to understanding these vignettes is the growing critical resistance towards the idea of “post-colonialism” as seen in the work of those such as Anne McClintock and Carine Mardorossian. McClintock’s work is particularly pertinent in pointing out the pitfalls of post-colonialist thought. These hazards include grounding the study of colonised groups along linear narratives, using the progressive terminology of an Enlightenment worldview. Post-colonialism also generates a false binary between the “colonizer” and “colonized,” ignoring the nuances involved in discussing the lives of women and queer persons, for example, as well as assuming synonymy between ex-colonies that can be very different. Capildeo’s collection reinforces this point, with poems underscoring a particular combination of experiences unique to them alone – combining queer, Caribbean and Icelandic frames of reference. This ironic look at institutional, patriarchal and white power comes from inside academic institutions themselves – the image of “my progressive male colleagues” who “would get me alone” and “a little way into my her-answers, they would roar in my face: ‘Bullshit!’” an amusing and defiant take on male condescension in the university.

Capildeo refuses categorization and takes a detached view from academic judgement and “post-colonial studies,” moving comfortably between Europe and Trinidad, from the medieval to the present, demonstrating that such simultaneity is not only possible, but natural to her life. However, Venus as a Bear does not exist solipsistically; it establishes inter-textual relationships with other works that are worth teasing apart and investigating. “Novena Body Parts,” for example, responds to Puerto Rican poet Loretta Collins-Klobah’s poem “Novena a la Reina María Lionza” while “The Magnificent Pigs of Thetford” responds to Captain Beefheart’s iconic album Trout Mask Replica and its song “China Pig.” While Klobah’s poetry throbs with imagery of Puerto Rican heat and female bodies as well as the combination of Spanish and English, Captain Beefheart combines the rhythms of rock, blues and free jazz to make him – as Rolling Stone once put it – “the only true dadaist in rock.”

Writing in collaboration with Collins-Klobah and in response to Captain Beefheart, Petrarch, Björk and more, Capildeo’s message is clear – this collection is one that combines melodies and images, creating a cacophonous harmony in the whole.

The collection does not intend to be a liberal political manifesto, and is no Adichie-esque rebellion against dominant discourses. Capildeo is not the diasporic writer to saddle with these responsibilities that not all writers of colour ask for, but are often bullied into. Above all, Venus as a Bear is energetic, inspired and funny – turning toward the beauty of nature as inspiration, rather than normative modes of beauty found in human relations. Venus as a Bear bubbles with laughter. “Catifesto” for instance, declares with the anthropomorphized voice of the feline, “I am my own cat,” an “aesthetic chest-sitter.” The Romantics’ narcissistic use of nature to achieve sublime transcendence is rejected. This collection instead reclaims “bullshit” for the bulls, and reaches out to those who “believed in duty; yes in Venus as a bear; wanted a manifestation; wanted Venus to give salvation; yes, Venus as a bear.”

Chloe Lim is a writer and outgoing graduate student at the University of Oxford researching English Literature from the 20th century to present. She specializes in trauma studies and diasporic fiction. Outside Oxford, she is a teacher based in Singapore.