This is an intensely moving, if at times distracting book. In it, Agnes Ku uses prose, poetry and images to point towards – one can’t say ‘disclose’ or ‘reveal’, the approach is allusive and indirect – key existential puzzles that face us all and relates them, not always entirely successfully, to the dilemmas of modern urban living in Hong Kong and the bitter truths of ageing. 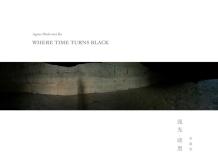 The key existential questions are those that clamour incessantly. How do we come to be who we are? How do we hold on to that sense of self as we and it move through time, and time and space move past us? How are those engagements with and of our being related to the spaces in which we have lived? How does all of that connect us to those closest to us? And, most movingly and, in the case of this book luminously, how easily can all that slip away and if it does, does it matter?

“…do we notice that the memories stored in our minds…are…being lost, bit by bit?”

In the phrase ‘bit by bit’ lies much of the genius in this immensely attractive work. For the photographic images by which it is illustrated, which carry the core of its meaning, are not complete images. They are panorama shots that, in being digitally processed, had their continuity, their sweep from one side of the view to the other, deliberately interrupted. The result was ‘data failure’, which means visually that each photograph is no longer a representational whole. Instead it has areas of blackness that have been chopped out ‘bit by bit’ as clumps of the pixels of which the image was composed disappeared imposing a new ‘sense’ to the scene. A sense most poignantly expressed in the book’s first image that shows Agnes Ku’s mother approaching the camera along a pavement as blackness swoops in above her and slices across where she is going.

But that is to run ahead a little. For the symbolic heart of the book is the illness from which Agnes Ku’s mother began to suffer in the year in which the images in this book were taken and during which the journey …or perhaps journeys… they record took place. Image and text are thus counterpoint to each other. In reading the one we come to see the other; in seeing the other we learn to parse the one.

The book is structured almost as a musical composition. The bi-lingual whole – the English and Chinese texts are always juxtaposed – has five sections, each composed of a series of short meditations, poems and poetic fragments that punctuate longer or shorter sequences of partially eclipsed images and, directly or more usually indirectly, reflect on them.

The physical heart of the book is two sections about places. Imprints of Space is a ‘macro’ view of To Kwa Wan, where Agnes was born and which she revisits with her mother as an aide memoire. It is a place “where time seems to have stood still” yet that is both “imagined and real.” Its pivotal role can be inferred from how it looms so much, much larger than Kwun Tong, where “I spent my childhood and youth”. In the book, and perhaps in Agnes Ku’s life, Kwun Tong has gone almost before it has arrived.

Hidden Corners, a ‘micro’ view, offers small fragments of scenes that seem later to echo and re-echo in a short parenthesis by Agnes’ about her mother’s seeming memory loss, “Is it that they (the aged) no longer remember, or that we have forgotten much more?”

The book ends with a short section called Lights and a briefer closure, On the same train (afterword). Perhaps deliberately we are left uncertain. Is the journey we embarked on with Agnes and her mother, with remembered places part-filled with “blackness…neither sadness nor indulgence (but) the hidden, the unknown”, over? We are not told. Perhaps the journey can never be over. Perhaps, indeed, and despite the metaphor of the train, it wasn’t a journey. For if we are all on the same train, where can it have come from? Whither could it be going? And why?

Agnes’ mother replied, when pressed to recall events in a past that seemed “blurred”, “To remember – or not – what does it matter?” In reply we have this book that Agnes Ku describes as an attempt “to highlight the unseen empty spaces between reality and illusion.” In such spaces, we are told, we can find the uncertainty of the “true”. In a word a heterotopia; somewhere “on the border between dreaming and waking” where we can “even shake the cognitive system that rules society behind the scenes.”

This reader’s sense is rather that in this elegant, indeed beautiful book (it smells quite wonderful) there is a simpler message, even if that is not the rather abstract and over-theorized one Agnes Ku expressly states, with its somewhat modish concerns with capitalism and its urban, consumerist discontents.

The simple message is that in whatever society we spend our days, at the end we fade and then we die. If we are lucky, we shall have a loving observer like Agnes Ku to mark our moment in the glare of time. If we are not…

Agnes Ku is anxious to embed that fundamental, indeed elemental truth of our existences in her sociologist’s concerns about the ruthlessness of urban growth and change in places like Hong Kong, the current fixation on youth and the future, and the consequent too swift and easy destruction of the physical record of the past. We need, she contends, ‘a truly progressive view of time (as) one that slows down, so people need not fear forgetting the past.’

She asks, is it “time that makes us lose our memories, or society that causes collective amnesia?”

I think that as long as we have observers like Agnes writing books like this, the answer is neither.

Stephen Davies is Honorary Professor in the Department of Real Estate and Construction and Honorary Institute Fellow at the Hong Kong Institute for the Humanities & Social Sciences at Hong Kong University. He is also an editor of the Journal of the Royal Asiatic Society’s Hong Kong Branch.