I’ll fess up here that economics, at least the brand taught in universities, has to me always felt absurd and out of touch with reality, especially the last decade of so-called austerity measures that have been implemented across the globe. This form has swallowed modern economic policy the world over as governments proclaim that ‘living within our means’ requires massive cuts to public services, stagnant wages (a thing common even before austerity), and the heavy taxing of the poorest whilst the rich get tax breaks and continue to get richer. The absurdity of this means that in my home country of the UK, nurses, firefighters, and other dedicated public sector workers can’t get a decent pay rise, whilst the British Conservative Government dished out a billion pounds in rewards to the Irish Democratic Union Party for keeping the Conservatives in power after the dismal election of June 2017. There supposedly was ‘no magic money tree’ for a pay rise, yet one magically sprouted up for a political backhander. 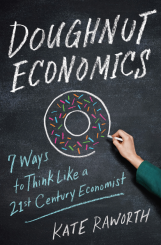 Political discourse is currently dominated by the subject of economics, or dressed in the causes and consequences of wayward public spending and Wall Street economics gone rogue. This has made politics a stagnant river for those of us bobbing on the currents of daily life. Of course, this is the political establishment’s desired effect. The global crash of 2008 was a minefield of acronyms, dots and zeros that meant little to the everyman caught up in its assault. Watch Michael Moore’s 2009 documentary Capitalism: A Love Story and witness Wall Street financial sector workers trip up over jargon that they themselves created. For them, the less we understand, and the less we are involved, the better.

We are not meant to comprehend the enormities of economic theory and policy, whose language, as stated in Kate Raworth’s book, Doughnut Economics: 7 Ways to Think Like a 21st-Century Economist, has become ‘the mother tongue of public policy – the language of public life and the mindset that shapes society.’ So why doesn’t economics, beyond budgeting the running of our own households, play a more profound role in our lives? The disconnect between those who make public policy and those affected by it seems enormous.

The introductory chapter in Raworth’s book answers this question to an extent. Economic theory that is taught today to future economists and policymakers comes from textbooks that date back to the 1950s, and the theory discussed reaches even further back to the mid-1800s. Yet, the day-to-day lives of those at the mercy of economic policy (basically all of us) are so far removed from the realities of the 1950s and certainly of the 1850s. The world has become globalized and trade is now dominant in foreign policy decisions. The world has moved on, yet the economy is still governed by this obsolete yet tenacious mindset.

Thankfully, Raworth’s book points to a fresh wave of economic movements driven by students or renegade economists who don’t see the rigid and stuffy theories of yesteryear as the most prominent or useful. They grew up in the post-crash environment and witnessed firsthand the devastation that these old-hat theories threw up in the name of endless growth. Raworth’s book seizes this opportunity to ‘debunk the old theories’ and rally the masses by ‘replacing them with new ones to inspire us.’ Doughnut Economics ‘proposes a new economic story that is told in pictures as much as in words.’ Economic jargon is replaced with illustrations that are comprehensible and accessible.

What is this doughnut theory that Raworth preaches? Like with most things, a reader’s interest piques when food, especially that of a sweet variety, is involved. Imagine the doughnut: soft, warm and delicious. Humanity needs to occupy a sweet spot that, as Rawoth demonstrates with the use of diagrams and graphs (‘told in pictures as much as in words’), is located within that squishy warm ring of the doughnut. The barrier to the circular void at the centre represents the ‘social foundation’, and moving into this space represents the collapse of humanity via the shortfall and the eventual failure to distribute resources such as food, water, and healthcare. It also represents mankind’s failure to promote equality in access to education and housing, in gender relations, and in political representation. The outside barrier of the ring, the eternal space, is the ‘ecological ceiling’ that represents the excessive consumption of the Earth’s natural resources to the point of environmental collapse.

For mankind to occupy this gooey ring, Rawoth lays out seven requirements of economic reform that dispel our current situation of consumption and acceleration, as well as change our life goals. For example, the first chapter discusses how the obsession with the GDP (Gross Domestic Product) and endless economic growth needs to be jettisoned from the international conversation. According to Raworth, the need to grow ‘onwards and upwards’ is pushing resources to a limit that will push mankind outside of the sweet spot of the doughnut and into oblivion. The idea is to ‘thrive within balance’, which means that humans need to focus not on the growth of the GDP but on the environment, the equal distribution of resources, including food, water, wealth, and on providing political representation to all. If this seems like a tall order, it is because of the economic ideologies that currently undermine our standards.

As a species, we are dangerously teetering on the edge of both barriers of the doughnut. The excessive consumption of precious resources causes a rise in global temperatures and exhausts our fuel reserves as if we had no serious consideration for the future generations. Our oceans are polluted, the diversity of animal species is declining. The unfair distribution of wealth and the global corporate monopoly of natural resources, such as water and food, means that many are living well beneath the poverty line, whilst a privileged 1 percent of the global population operate within a bubble of luxury the other 99 percent can hardly imagine. Doughnut Economics presents a genuine case for a global reform and a rebalancing of resources. The book is a game-changer. It allows for the old, tried, tested and debunked theories to completely expire, replacing them with a new way of thinking that encourages economists, policymakers and financial workers, and even the public, to think of the bigger picture: human ingenuity, engagement, survival and cooperation. It does not argue in favour of abandoning our current capitalist system, but of refocusing the balance for the sake of equality and the betterment of all. The doughnut theory is not farfetched or unobtainable. What it requires is the right people working in the right institutions, led by a common goal: to let us live inside the doughnut.

Stephen Lee Naish‘s writing explores film, politics, and cultural theory. His writing has appeared, and is forthcoming in numerous journals and periodicals, including Candid Magazine, 3:AM, The Quietus, Film Matters, and Empty Mirror. He is the author of U.ESS.AY: Politics and Humanity in American Film (Zero Books), Create or Die: Essays on the Artistry of Dennis Hopper (Amsterdam University Press), and the forthcoming Deconstructing Dirty Dancing (Zero Books, April, 2017). He lives in Kingston, Ontario, Canada.