Angus Reoch considers the dominance of empathy within capitalist ethics.

I’ve always disliked empathy. Admittedly, this has been for childish reasons – in primary school I had been taught the difference between ‘sympathy’ – care for others and understanding somebody else’s pain – and ‘empathy’ – the care of others, and feeling their pain. Yet when I emerged in the great wide world, everybody around me start discussing empathy like it was the only dog in town. Such is my passion that I once sat down a close friend of mine (you can imagine her patience) and attempted to sketch out the old sympathy-empathy divide on a graph. You can see my recreation below: 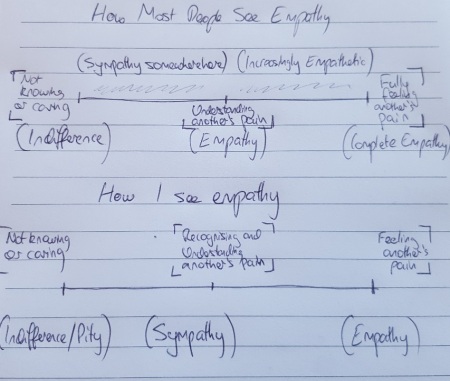 This may seem pedantic, but my quibble was substantive: when we speak of empathizing with another person, we refer to gaining a deeper understanding of their situation, their emotional state of mind, ‘spending a day in their shoes’. Yet is this actually empathy? Do we actually feel another’s pain, or do we merely understand it? What does empathy offer that sympathy or compassion does not? As I would find out in American psychologist Paul Bloom’s insightful polemic, Against Empathy, my suspicions were well-founded: what many people consider to be ‘empathy’ is actually better suited to the category of ‘cognitive empathy’ – understanding people’s emotions – as opposed to ‘emotional empathy’ – the internal replication of another’s emotional mood.

So what do you write about a book which takes on America’s most sacred of shibboleths? It seems Bloom had also considered this, being at pains to demonstrate how controversial and against conventional wisdom this argument is to make in America’s contemporary intellectual culture. Today, empathy is considered by all manner of public figures, including former President Barack Obama, to be the core of ethics itself. Against this, it is difficult to align one’s self with a book with a seemingly obnoxious stance, even further when it is endorsed by New Atheist Sam Harris and Amy ‘Tiger Mom’ Chua – two of America’s most prominent authors seemingly in need of an empathetic injection. Yet, as the book explores, is empathy really what unsympathetic people need? Or rather, does empathy only serve to reinforce existing biases, and camouflage rational deliberation?

Bloom uses some powerful examples to make his point:

“C. Daniel Batson and his colleagues did an experiment in which they told subjects about a ten-year-old girl named Sheri Summers who had a fatal disease and was waiting in line for treatment that would relieve her pain. Subjects were told that they could move her to the front of the line. When simply asked what to do, they acknowledged that she had to wait because other more needy children were ahead of her. But if they were first asked to imagine what she felt, they tended to choose to move her up, putting her ahead of children who were presumably more deserving. Here empathy was more powerful than fairness, leading to a decision that most of us would see as immoral”

The conclusion is clear: empathy can lead human beings to make immoral decisions which they would never rationally consider. In these cases, empathy is not only unhelpful, but dangerous. Even if we admit to the flaws of empathy – that it values partial, subjective relationships over universal, humanistic values – this does not inoculate us against its threat.

Far from being a foundation of morality – as claimed by some – empathy is actually entirely separate to the concept of morals and values. When we consider our relationship to strangers, foreigners and the rest of humanity:

‘Intellectually we can value the lives of all these individuals…but what we can’t do is empathise with all of them…Several years ago, Annie Dillard mocked the very idea: “there are 1,198,500,000 people alive in China now in China. To get a feel for what this means, simply take yourself – in all your singularity, importance, complexity and love – and multiply by 1,198,500,000. See? Nothing to it.”’

Bloom follows this logic to its conclusion the next step: he argues that empathy is a misleading tool of human action, and advises us to embrace ‘rational compassion’, which I will discuss later in this piece. But it’s at this point that many readers – myself included – might suspect Bloom of going on a reactionary, anti-‘snowflake’ tirade, accusing liberals and lefties of being unable to have a rational argument. After-all, ‘rational compassion’ sounds like one of those white liberal buzzwords used to put down displaced social actors who don’t appeal to the order of things. Such an interpretation perhaps befits Harris – the man who accuses religion of irrationality and yet only seems to find real-world fault with Islam – and Chua – who uses outdated social science to prove that Chinese and Jewish immigrants (not coincidentally her and her husband’s heritage) are somehow culturally better migrants.

Yet this kind of closed-circle thinking – ‘rationality only belongs to my tribe’ – is precisely what Bloom critiques. Rather than opening us up to new experiences, empathy actively closes ourselves off to the experiences of others. Those appeals to rationality short-circuit themselves in the wiring of empathy, because we only empathize with people we already care about. Rather than expecting Harris to somehow empathize with Muslims or Chua with those supposedly less successful immigrant populations, it is empathy itself which privileged the plight of their people at the expense of others.

This is something recognized in charity campaigns, when they shamelessly reproduce racist stereotypes of poor dark-skinned children yearning for white saviours, but occurs in any attempt to dissolve the category of ‘the other’ through widening the eyes of the target audience. We have to question how successful these models of empathy production have been – all things considered, contrary to the wishes of Peter Singer, most of us don’t donate significant amounts to charity, even when aware of horrendous tragedies. Even in its successes, nobody can argue empathy is efficient in the long-term.

‘When there are shootings of unarmed black men, commentators on the left argue that the police don’t have enough empathy for black teenagers, while those on the right argue that the critics of the police don’t have enough empathy for what it’s like to work as a police officer, having to face difficult and stressful and dangerous situations….The one thing everyone could agree on, it seemed, was that more empathy is needed.’ (My emphasis).

What Bloom here demonstrates is that empathy’s main strength – its innate capacity to relate and de-relativise human plight – is also one of its great weaknesses. For every community’s attempt to assert its humanity with ‘#BlackLivesMatter’, empathy can conjure up a reactionary sentiment like ‘#BlueLivesMatter’ from a community with a conflicting empathetic agenda. The problem is that as soon as we begin to multiply our communities to consider empathy for, we soon end up hitting ‘#AllLivesMatter’, a viscerally disgusting sentiment which attempts to camouflage actual suffering with an emotional appeal so broad it’s meaningless. This indicates why humanization as a tactic is frequently so impotent – and why BLM activists themselves (as opposed to media figures) have not particularly appealed to it. 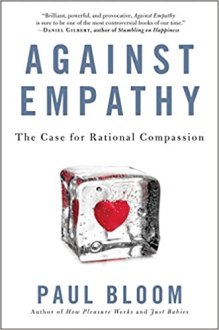 To provide another example, in the lead-up to Brexit, a  campaign conducted upon an anti-immigration sentiment, a majority of British thought that immigration does benefit the economy and were split upon the effects on cultural life. Humanization campaigns make the rather problematic claim that ‘other people are just like you’ without ever factoring in the fact that empathy is not a rational category of human understanding. People may very well know certain things and not particularly care about them, at least in emotional terms. A truly strategic intervention would connect people’s knowledge with its logical consequences – appealing to their understanding, rather than their emotions.

If Bloom’ argument seems slightly banal, if the inclusion of endless examples and questioning – ‘do you really feel this or do you simply understand it’ – seem slightly ludicrous, it is only in response to the ridiculous claims being made of empathy in the first place. As Bloom states repeatedly, empathy is such a specific and unusually strong category of human relations – the capacity to genuinely emulate another human being’s emotional state – and yet it is taken from this metaphysical realm of consciousness and transplanted into the ordinary social realm, where it is held up to be good, politically useful, morally important and even the foundation of morality itself. When such statements are being made with wide-eyed naivety, they deserve to be challenged.

In particularly revealing glimpses throughout the book, Bloom shows how scholars often link empathy’s power due to its resonance with our self-interest. It shouldn’t be surprising that the faddish psychology of empathy links itself to the conventional wisdom of homo economicus and his utility-maximisation (useful deconstructions of this are found in William Davies’ excellent The Happiness Industry). After all, if all mankind is capable of is serving his own pleasures, then it logically follows that he would only care for his immediate kin.

This kind of philosophical reductionism – that after millennia of philosophy and science, we have simply proved that human beings are selfish and irrational – is countered by a surprisingly cogent recount of Bloom’s real-life interactions with Buddhist philosophy and its notable practitioners. They note that Buddhism distinguishes between ‘sentimental compassion’ – emotions created by empathy – and ‘great compassion’ – an enlightened position of warmth and care. Indeed, the latter makes an individual more likely to act on worldly suffering. Exposing us to empathy takes an emotional toll, leaving us inert and unable to act. Compassion by contrast gives us a positive sensation, enabling us to take proactive action to counter misery.

When Western commentators make appeals to Hindu or Buddhist narratives – about being ‘one’ with nature, trying to maintain positive karma, etc. – they tend to decontextualize these arguments from the worldly perspective of their origins, repurposing them for explicitly egocentric purposes. While seen as cold, impersonal and brutal, what Western, capitalist society needs is a more impersonal approach, rather than less. Embracing this worldly compassion is precisely what enables us to listen to suffering, to consider human problems in perspective, rather than make ourselves the centre of the universe – empathy’s prime ability.

While not intending to be any kind of left-wing political primer – Bloom in his political asides appears to be a centrist Democrat – this is a much needed intervention into a stale political model, one whose flaws many activists admit to yet are unable to transcend. More generally, it is a welcome rebuke of the kind of naïve materialism posited by neuroscientists who – in the lack of any genuine intellectual culture regarding social issues in American society – give their ‘scientific’ opinion on human nature, as if the human mind can be explained through a set of neural impulses. Those who express the science of philosophy without ever having understood the philosophy of science doom themselves to never be able to grasp why concepts like ‘the mind’ are as real as the brain itself, why philosophy lives on despite scientific advances. Without discounting the very real problems of rationality, it allows us to consider these problems on their own terms, without recourse to any technical fix. For reasserting the importance of moral philosophy in an age where empathy’s nihilistic partiality is only rebuffed by a naive technological determinism, Bloom’s book is a welcome contribution.

Angus Reoch is a Sydney-based writer, whose interests include political theory, social orders and austerity politics. He tweets on @jazzcriminal and blogs about political theory at https://sovereigntyinspace.wordpress.com/