Maitrayee Deka reviews the latest by Constantine Nakassis – an unusual argument that brands and counterfeit culture can be re-appropriated in subversive ways and turn back against the corporations that create them.

We value brands for their distinct identities, and their ability to say something about goods and their users. Such brands become synonymous with the projects they sell: the computer is a Mac and we can ‘go for a Starbucks.’ What some now call ‘the world’s other economy’ of copied, counterfeited, or ‘Shanzhai’ products supplies the world’s less affluent with access to electronic goods and branded necessities through street vendors, rural markets and other unauthorized channels. One might think of cheap and cheerful bazaars like Hong Kong’s Chunking Mansions or Mong Kok ‘Ladies’ Market’ or Bangkok’s ‘Chatuchak weekend market’, displaying Shanzhai cell phones that look like iPhones on one side and Blackberrys on the other, or the t-shirts with meaningless English words sported by many young workers. 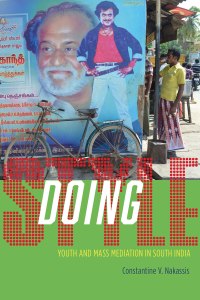 This popular world of brands and their copies is what Nakassis explores in his ethnography of lower ‘middle class’ Tamil youth and their use of brands and other global cultural products to perform what he calls ‘style’. With ‘style’, Nakassis articulates the measured emulation of global consumer culture, and in particular local movies stars (e.g. Tamil Nadu), in speaking and in dressing. For Nakassis  counterfeit culture produces a way of carving out a liminal space that is neither adult nor child. He suggests that this intermediate stage of ‘doing style’ is a way to define a future in a rapidly changing world, in particular for people who live in ways that are both parochial and global at the same time.

In this way Nakassis’s analysis of style is very similar to how this concept was used by British Cultural Studies scholars in the 1970s. They analyzed how marginalized working class youth cultures deployed the brands and symbols of an emerging consumer culture to negotiate their place within a declining industrial order. Only that unlike the Skinheads of 1973, Nakassis’ Tamil college boys looks at the future rather than the past. Style becomes a way for them to imagine their future place in what he calls the ‘neoliberal order’.

The most interesting part of the book however is the section on brands.This also happens to be the area that Nakassis has worked the most in recent years. His work in this area builds on the idea of a generic ‘brandedness’. With this he refers to brands that acquire their power not from what they signify, but from the fact that they are like other brands; to have brandedness is to be like a brand and to have the quality of branded garment. (Again think of the meaningless English words that look like they were part of a branded logo, or the Shanzhai substitution of Buckstars for Starbucks.) Nakassis suggests that rather than identities, semantic markers that tie products to particular meaningful universes, like the Apple or Nike’s world of ‘just do it’, these generic brands operate as what he calls ‘surfeits’. With this he means that their meaning and function exceed the original authority of their owners: like ‘Facebook’ on a placard during the protests in Tahir Square in 2011, the brand has been set free to circulate in a poplar economy where it is appropriated and recombined in unexpected and uncontrolled ways. Thus, from within commodity and consumerist culture emerges the possibility to kick back against hegemonic forces.

While the idea of brandedness as a consumer mediated experience brings an openness to the notion of brands, it is Nakassis’s focus on the production side of brands-as-surfeits that is his true addition to the existing literature on brands. As he suggests, surfeits flourish amidst ‘lower level producers’ that are part of the ‘worlds other economy’ of pirate, contraband and knock-offs. Nakassis notices that lower level producers do not always identify the different labels they tie to a particular garment, and such different labels may co-exist in a single garment. This mirrors the ‘grabism’ (originally Chinese 1930s intellectual Lu Xun’s term) of Shanzhai culture, a subversive appropriation and mimicry of a dominant global culture. And Nakassis seems to want to frame it in this way too, suggesting that producers too view brands as surfeits to be used in the production of ‘style’.

Nakassis does not develop the production aspect of brands as surfeits much. From my observations with lower-end traders in Gandhi Nagar in New Delhi, Asia’s second biggest readymade garments market, it seems that there are a number of additional factors that govern their choices of manufacturing and designing a garment. Apart from style, labels, especially when they are locally produced, are used as a way of identifying the garment to a particular producer. In the words of a producer, ‘it acted as a kind of visiting card for the shop to retain their consumer range over time’. The most striking aspect that came out while talking to producers and consumers of these kinds of unofficial branded garments in different markets in Delhi (like Palika Bazaar, Gandhi Nagar, and Nehru Place) is how a pastiche of brands and symbols became a way of appropriation and ‘grabbing’ a temporality of the global. Jeans would have Apple, or Facebook stitched into them, when I asked about it the producers did not exactly know why they were there. Apart from the fact that it stood as a relic of the contemporary, and attempt of being modern. As one of the traders said, ‘they are the words we keep hearing around us the most’. Such appropriation can also serve as a way to temporarily carve out a market niche. In 2007, during the US presidential elections the Obama phone, a blackberry clone made in Shenzhen, became a hot item on Kenyan street markets, only to  suddenly disappear shortly aftewards. A combination of branded ‘surfeits’ Obama’s name, the Blackberry design (that at the time signified the semblance of US corporate culture) became a way to give a however temporary specificity to an otherwise generic product.

From ‘sign values,’ to use Jean Baudrillard’s old term, magical marks that added an immaterial essence or aura able to evaluate a branded product over the rest, brands have become use values, omnipresent symbols that have escaped the authority of their owner to become part of a global cultural commons to be freely appropriated and recombined. The massive entry of the world’s popular masses into consumer society, an effect of globalization in the last decades, might mean that such brandedness will become the dominant way to relate to brands. It will be in the times to come that we would see the unfolding of surfeits in global popular culture and the kind of politics that comes with them.

Maitrayee Deka is a postdoctoral Fellow in Sociology at the Department of Social and Political Sciences, University of Milan, Italy.