Adam Steiner reviews Critchley’s latest. A collection of entries for a projected, larger encyclopaedia of impossibility, ABC is a revealing insight into a philosopher’s personal journey towards questions somewhere in-between the great and the small.

Simon Critchley’s book is a failure – but what a failure! As one the most eminent and accessible philosophers working today, he has managed to salvage together a unified palimpsest of ideas that struggle within the limits of knowledge and thought. It is worth mentioning the book is beautifully produced by Univocal Publishing, a limited edition of 500, slick pages and a cover like a marble egg. 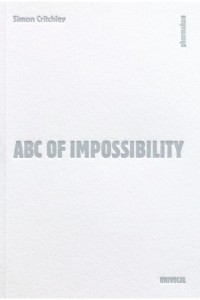 On the surface, impossibility seems to be a bulwark to enquiry – as Wittgenstein said – where of we cannot speak, we must remain silent. But if we begin from ontology as a perpetual curve, our minds running along it, working out the undulations of what there is, what is next, the curve’s horizon ends, or appears to end, and it is there we perceive of impossibility – a roadblock to ambition and perhaps, existence.

But from the beginning, Critchley takes this in his stride, and these are thoughts reaching for a subject, sometimes getting lost along the way, and often without conclusion – in the more Continental strain of philosophy, he explores his subject but does not necessarily seek to interrogate it. Stopping-off, along the way at a range of subjects, neatly indexed: Being, Poetry, Money, Death, even Critchley (on Critchley).

It is my kind of book. A philosopher stepping out of uniform and giving us more of themself, or perhaps a less manufactured self from the day-job, you sense the form must be liberating, Critchley gives interesting insights, but does not feel compelled to offer dedicated arguments which then require a defence, an lapse of entrenchment that academic analytical philosophy can easily lapse into. Critchley’s book powerfully points to the impossibility of making a clear and rational argument about impossibility, but still finds ways to talk about it.

Discussing his recent book, Notes On Suicide, with HKRB as part of the interview series, Critchley points out that we lack a dialogue, or even a language on that subject, much the same problem abides when it comes to Impossibility. Logic and reason are essentially positive, indeed, they posit positions and state of affairs, so we can establish the concrete from the ephemeral, but equally as human beings, we often (try to) conceive of the impossible, we are built to dream and endure/enjoy fantasy to keep our minds level, and as much as love is blind, ambition can certainly make fools of us all. In this sense, as openness on suicide and honest reflections upon death (to philosophize is to learn how to die) can make us stronger, so tangling impossibility might make us wiser as our characters are forged by our mistakes, grudging recognition of our shortcomings. 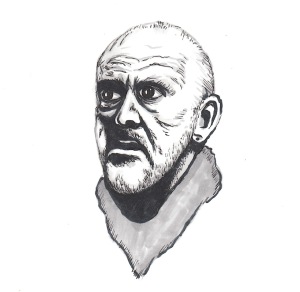 Simon Critchley, by Roy Christopher, for our interview series.

Compared with death and decay, impossibility always seemed to me the darkest philosophical idea (in every sense), given great heft by Jean-Paul Sartre’s, Being and Nothingness – where lies the finitude of life. We can all conceive of an ending, but death itself, as a state of non-thinking, non-feeling often escapes me, it is impossible. Critchley points out from Racine’s Phaedre: “we are obliged to live in the world [but] we are not of the world.” That is – existence of things external to us, and most pertinently existence itself, is not contingent upon us, human beings – though we would often like to think it otherwise. Even if, as George Berkley wished to argue with idealism, we are only perceptions within an idea conceived/perceived by God, one cannot help but draw a blank as to what comes after that.

In the section on Surfaciality, the poet Alberto Caeiro argues for the lucidity of being, that all the mysticism we seek is what is right in front of our noses, leaning towards a multiplicity of closeness, if we are a fragment then it is of a whole, at least in the mind, everything is closer, and thus more possible than we allow ourselves to imagine – a sense of doubt pervades, hounds us.

Then surely impossibility is Nietzsche’s abyss, the hard and hardening sublime of a great inky wound, we aware of its shape and totality, but like a black hole the inside, where space battles matter, is a vacuum of being and knowing? Where what might be is at once meagre and great? Schrodinger’s cat is so often kicked around, and yet while there are perceptual limits, and a bifurcation of possibility, we can at least conceive of all the angles – like faith in God, we simply lack confirmation.

But, to return to the beginning, Critchley nails-down the conundrum in a discussion on Fragments – there are two abysses, humans beings are: “a well staring into the sky”; we echo the world’s lack of understanding, display its indifference, impossibility is mirroring, self-fulfilling.

I have always admired the impossible as ultimate goal. Both Darran Anderson’s recent, Imaginary Cities (Influx Press) and Douglas Murphy’s Architecture of Failure (Zero Books) point towards great ambitions of construction and creation, system-builders, with some ideas realised (temporarily) others not. The concept is there, but it cannot be fully fleshed-out, made into a thing (reified).

For me, this hits at the existential quandary of impossibility, like Critchley’s book itself – even though the grander might never be reached and the project partially abandoned, it seems the attempt might objectively outlast the physical. As solid as a book is, impossible buildings can never collapse, or be burnt down, the action, idea or intent stand longer compared to the physical which seems destined to ruin, if not destruction – but there lies the impossibility of paradox, humanity might never find out, absent at our own apocalypse. But at least Critchley points towards the nobility of philosophy, even when we are reaching atour utmost and fail to provide anything that satisfies, at least we can say we were here, and that we tried.

Adam Steiner‘s poetry and fiction appear in Proletarian Poetry, The Next Review, Fractured Nuance zine, BoscRev: 4 – and other publications. Adam was selected for the 2014 Ó Bhéal Coventry-Cork Twin Cities Poetry Exchange and was part of the Coventry SHOOT Festival. He is former Co-Editor of Here Comes Everyone magazine and his current project is www.disappear-here.org. His novel about the NHS, Politics of the Asylum, is forthcoming.

The featured illustration on this post is by Roy Christopher. Find out more here or visit his website.

One thought on “ABC of Impossibility”