To begin on a personal note, I first encountered David Harvey several years ago through his course, Reading Capital. It was also, as it happens, my first really serious encounter with Marx. The coincidence proved propitious, for it is among Harvey’s virtues to inoculate his students against a common virus inside and outside of Marxism: the virus of dogmatism. In large part, this arises from Harvey’s keen appreciation of the specifically dialectical reasoning found both in Marx and in some of his more salient successors. This appreciation consistently governs the broad arc of thought presented in Harvey’s latest book, a large collection of his work from the last several decades. The Ways of the World, a very varied assemblage, has two other prominent features throughout. First, Harvey’s sensitivity to how environment, space, and place, rather than being comparatively ‘inert’ or ‘autonomous’ things, are fluid compositions, both shaped by and shaping the values and processes that constitute our human lives. Second, his attunement to the political (writ large) resonances of factors often received as of banal or distant relevance to serious socio-economic or ecological matters. 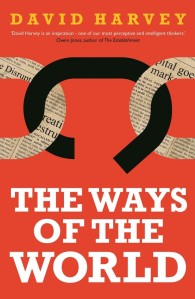 All three of these strengths find announcement in the opening chapter, ‘Revolutionary and Counter Revolutionary Theory in Geography and the Problem of Ghetto Formation.’ The piece powerfully argues against the sterilizing implications of positivism, both as it has affected the field of twentieth-century geography, and, more generally, via its influence on the trajectory of the entire humanities. Harvey shows that often, in the name of attaining an account amenable to a regime of quantification, such projects become conservative or even outrightly regressive. It is upon this pivot that Harvey, at first subtly, injects his proposed antidote to the problem: a dialectical reasoning using the work of Engels and Marx. In the same connection, he makes explicit the political dimensions of environment, space and place as necessitating our consideration. The manner in which Harvey puts forward this call for a shift, both within the bounds of specialty and across the humanities resists the temptation to rigidity. He does this not only through his tone of communication, but in his programmatic coda where he describes that it is precisely a sensitivity to circumstance which is necessary to resist the devolution of the Revolutionary to Counter-revolutionary theory. Two passages we may take from that coda as illustrative:

Individual propositions and, indeed, whole theoretical structures are not necessarily in themselves in [Status Quo, Revolutionary, Counter-Revolutionary or blended] category. They only enter a category in the process of use in a particular social situation. Otherwise propositions and theories remain abstracted, idealized and ethereal formulations which possess form but not content (they are words and symbols merely). Counter-revolutionary formulations are frequently kept permanently in this content-less state.

And, having outlined a sketch of the relations among those categories, turning to the questions of elucidating how they inform our conversations both in geography and elsewhere, Harvey concludes:

These tasks can be pursued and these dangers can be avoided only if the counter-revolutionary posture of the organized pursuit of knowledge (and in particular disciplinary division) is recognized and reality is confronted directly.

The essays which follow can be seen as Harvey’s own efforts to take up this gauntlet throughout his work, at times inflecting the universal or the abstract, at other times the particular or the concrete, always being cautious throughout not to wend disproportionately towards one pole or the other. For Harvey, history is always theoretical and theory is always historical. Thus, in Chapter 4 – ‘Monument and Myth’ – a detailed discussion of the building of Sacré Coeur connects the ‘mere facticity’ of the narrative behind the basilica’s construction to the complexity of class struggle and its tensions with the legacy of Catholicism and monarchism. Or, in Chapter 9 – ‘The “New” Imperialism’ – the manner in which an organic relationship exists between the notions of accumulation by dispossession and other more overtly spatio-temporal strategies of capitalist crisis resolution is grounded through a consideration of the various crashes and problems which have afflicted the world’s economies in the latter twentieth century. But perhaps the most engaging illustration of the intersection of the abstract and the concrete, the universal and the particular is found within the Introduction to The Ways of the World. There Harvey draws the broad lines of the multiple themes to be traversed in the pages that follow. Harvey puts it best himself:

Some astonishing news reports are coming out of China. The United States Geological Survey, which keeps tabs on these things, reports that China consumed 6,651 million tonnes of cement in the years 2011-13 compared with 4,405 million tonnes the United States used over the period 1900-1999. In the United States we have poured a lot of concrete, but the Chinese must be pouring it everywhere at unconscionable rates. How and why could this be? And with what environmental, economic and social consequences?

The virtually incomprehensible amount of concrete being poured in China though is not simply an oddity, but simply another instance of the extremes to which a mindless logic of growth can drive us. In other words, the fact that growth can be theoretically considered good regardless of context will lead us down an incredibly dangerous route.

Harvey’s exhortations to resist that logic at various points in “The Ways of the World” put me in mind of some remarks of Albert Camus’ (recently discussed at the ). In The Rebel or L’Homme Révolté, Camus remarks:

We now know, at the end of this long inquiry into rebellion and nihilism, that rebellion with no other limits but historical expediency signifies unlimited slavery. To escape this fate, the revolutionary mind, if it wants to remain alive, must therefore return again to the sources of rebellion and draw its inspiration from the only system of thought which is faithful to its origins: thought that recognizes limits.

Camus’ point here is that despite the manner in which rebellion is often viewed as a kind of negation (which it is), that negation is also rooted fundamentally in an assertion or affirmation of values, the basis of the line or a limit which revolutionary or revolting force draws in resisting oppression. A new kind of responsibility falls on anyone who wants to revolt: not to simply say what we are against without being attentive to the new lines we are drawing.

For me, the real virtue of Harvey’s work is the manner in which it exhibits this fidelity to these affirmative origins of rebellion, and, with that fidelity, the courageous willingness to abide in spaces of tension where the temptation to a certitude or simplicity is often severe. As such, I can only warmly recommend this collection, surely, as a retrospective, and, perhaps even more surely, as a beginning.

Thomas Lynn is a thinker currently situated in Cincinnati. Among his preoccupations are the way in which phenomenology can inform questions in current philosophy of mind, the relations between the analytic and Continental traditions in philosophy, and off the beat thinkers such as Jacques Ellus, Paul Feyerabend, or Michael Polanyi. His musings can be found at his blog Notions from Tom. He is also the host of Thinking Thomas, a channel dedicated to critical theory and an interview series with authors in theory and philosophy.

One thought on “The Ways of The World”